Our good friend of the Cobden Centre, Sean Corrigan, is a wealth of fresh economic insight. Here in this small piece, he shows us that, if you strip out Government from GDP figures, you actually see what the private, productive sector of the economy is doing.

Sean does this for Japan. It shows that the current GDP recovery that has been reported widely in the press for this country, when you strip out the Government part of the economy, has actually gone backwards for 6 successive quarters. It has retuned to a level not seen since the early 80’s. 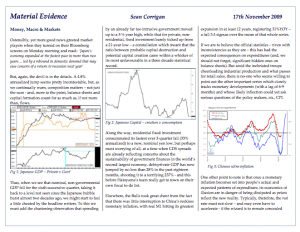 Sean is of course quite right to strip out government, as doing a bit of QE here and a bit there will inflate GDP figures for sure, but do little to grow the economy as we have previously explained before in this article . Now government can spend your money as a taxpayer on things that it views to be priority, i.e. transfer payments to the worthy and not so worthy and building cap ex projects such as railways, providing services such as justice etc, but this just redistributes what you as a taxpayer has earned and moves it form A to B.

To be clear nothing new is created from a wealth perspective, as it was already created by you, the taxpayer, to be given to someone else, directed by the government. More than ever, we need to be looking at how the productive sector is performing in all economies and not how the transfer, sector i.e. government, is doing. This is the engine of recovery and not the government side of the economy for the reasons stated.

I hope Sean or one of our readers would like to prepare this data for the UK. I suspect it would show a similar dismal story. In fact, when we hear of all these nations lifting out of the recession, I have a nagging doubt in my mind that this is the case.

The other interesting measure Sean uses is Debt to Private GDP. In Japan it has risen a staggering 28% in 18 months and is now sitting at 237%. In the UK we are told we now have a Debt to GDP ratio of 59%. What do we think it is in the UK? Without doing the numbers myself, I would suspect for us the Debt to Private GDP is over 100% as government is well into the high 40% + range of the economy.

A third insight is the Japanese MI money measure which is 31% up YOY and that correlated, with a time lag to inflation,  so beware Japan for the inflationary Tsunami!