We are indebted to Ewen Stewart of Arden Partners for permission to publish his report: A Game of Two Halves – Equities to Win. Please see that report for full detail.

We have called this note ‘A Game of Two Halves – Equities to Win’ because we believe that although the short-term trends for the UK economy are improving the longer-term forecast looks troubled indeed. Despite this, we believe the outlook for UK equities remains positive.

The first few months of 2010 may well surprise on the upside in terms of employment, house prices, consumer-spend and even, ultimately, GDP. But this is no ‘V’ shaped recovery.

We argue that trend growth, longer term, is likely to significantly disappoint. We argue that the UK’s superior growth, relative to many other developed nations, in the noughties was largely an illusion and we struggle to find the dynamo for growth over the next few years. We believe that the unwinding of the extraordinary fiscal and monetary stimulus, is a necessity, but will also be very difficult to achieve painlessly.

We believe the markets are still underestimating the structural problems with the public sector deficit and that politicians of all colours will be forced to deal with it. The consequences of not doing so would result in rising interest rates and a collapse in international confidence. The deficit remains the key issue for the UK and it may well bring substantial political challenges in itself. Indeed perhaps we should not have called this ‘A Game of Two Halves’ but a ‘Back to the Future – Welcome Mr Heath and the 1970s’?

Despite this, we are not bears of equities. It is true that current valuations are not particularly cheap by historic standards but the UK stock market is fairly defensive and internationally diverse. We believe equities look attractive against cash, bonds and, ultimately, real estate. We are concerned about a potential rise in inflation and again equities are a good hedge.

We have set a year end target of 5750 for the FTSE 100. Sector valuations do not follow a clear pattern and we believe this offers a number of anomalies. We have outlined our suggested sector weights below. As a generalisation, we seek overseas earnings – especially the US$, moderate leverage and strong cash flow as the place to be in 2010 with a return to M&A being more pronounced than perhaps expected.

The extreme cannot become the norm?

It may be a blessing that Ben Bernanke made the study of the 1930s great depression his speciality. We say may because, while the unprecedented global response undoubtedly has alleviated economic implosion, it does remain to be seen if the ‘nationalisation’ of deficits, the eclipse of moral hazard and the unique policy of both near-zero global interest rates and, in many parts of the globe, with quantitative easing (QE), has succeeded in sending growth back on an inflation-free growth projectory or whether the underlying malaise has been merely kicked into the medium grass. These issues are global, with substantial government deficits, trade and growth imbalances impacting upon different regions. 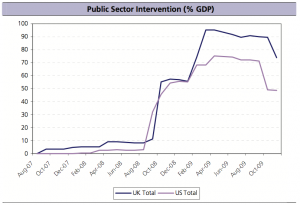 The economic policy reaction in the UK has been greater and more prolonged than any G20 nation, which is partially demonstrated by the chart above. The Bank of England cut interest rates to 0.5% (the lowest since the foundation of the Bank in 1694); 2009 saw a programme of QE to the tune of £200bn (equivalent to 25% of all outstanding gilt stock) and government spending was accelerated, despite plummeting tax receipts. The fiscal deficit is forecast by the Treasury to peak at 12.6% of GDP – a figure roughly twice as large as the UK’s 1975-1977 IMF crisis, and on a par with Greece.

Read on: A Game of Two Halves – Equities to Win

Ewen Stewart is Head of Strategy at a major UK investment bank.

In modern democracies, political cycles never end. As soon as one election is over, those in government office or aspiring to such an office…