Ever since Chairman Bernanke’s infamous Jackson Hole speech in August, markets – previously beginning to wilt under the weight of relatively poor economic numbers – have been on a tear. Greatly reinforced by the decision taken at the next FOMC meeting to buy US Treasuries as the Fed MBS portfolio ran off, the period since has been a veritable wet dream for such a committed inflationist as Blackhawk Ben. Assets prices have soared and the dollar has crumbled, dropping more than 6% on its TWI, taking it to within a percent of its modern-era lows.

One still wonders whether the academicians who populate the world’s most important monetary council fully understood the feedback loop that seemingly technical decision to buy Treasuries would spark by lowering yields to the point that more mortgages would repay, generating a need to hedge convexity and replace duration by MBS holders everywhere, as well as driving more Fed purchases and so on round and round. 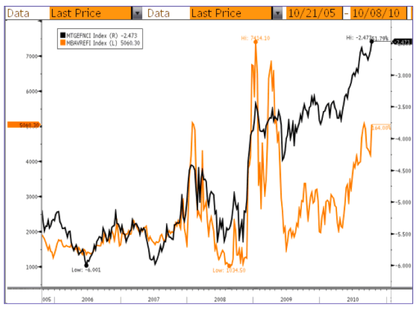 With around 80% of all mortgage applications currently taking the form of refinancings, the instability introduced here must be evident to all.

One must also look askance at the sheer intemperance of the Chairman’s words – backed up on several occasions by other senior figures, just in case we had not received the message – in an environment where market participants, already drunk on the heady liquor of near-zero interest rates, were begging for a profit-making, year-end boost to prices and so very ready to jump on the first momentum bandwagon to come their way.

It also remains unclear to what extent the Fed realizes that while all this loose talk may have seemed a costless way to jawbone some brighter ‘animal spirits’, it has also delivered an enormous hostage to fortune. Such has been the violence – and near unanimity – of the action that the FOMC can hardly now risk NOT setting off some pretty spectacular fireworks at its November meeting (something we are not quite sure if the few remaining voices of sanity – Messrs. Plosser, Lacker, Fisher, and Hoenig – fully comprehend either).

Moreover, even if the panel does light the blue touch-paper and retire, the need to overtop sky-high market expectations means it still risks setting off a damp squib and defeating its own aims.

Meanwhile, the US monetary crank-in-residence at Threadneedle St. – Adam Posen – is off singing a tune for which the increasingly unanchored coalition government is handing out the hymn sheets: more monetary ease should be delivered to soften the blow of a looming fiscal restriction which already resounds to the squeak-squeak of a bicycle beginning to be pushed backward.

A measure of this man’s understanding is that he appears to have told the German press that the best solution to their country’s problems is that they should immediately add to the expense of employing anyone there by raising wages. Reducing competitiveness and throwing people out of work in this manner would be of ‘help’ internationally, he argued.  Is the ruination of one country at a time not enough for this man – yet another Harvard-educated, career servant of the state who does not appear ever to have made an honest living satisfying private customers’ needs in a competitive marketplace?

In the intervening seven weeks or so, since Ben opened Pandora’s Box, the dominance of this new, inflationary bent to policy has seen the previous belief system of Risk ON (buy ozzie, sell yen; buy euro, sell dollars: buy bonds, sell stocks; buy industrials in preference to gold) and Risk OFF (do the opposite) repudiated in favour of simply buying everything with gay abandon in order to get out of the dollar and – to a slightly less avid extent – out of sterling, too.

Thus, the dollar has begun to follow US real yields as they plumb new lows – with TIPS as far out as mid’17 now below zero after a 70bp drop. For its part, the S&P has come into tight phaselock with break-even inflation rates. So close has this latter relationship become over the past two quarters that the levels have an r2 of 0.83 and the daily percentage changes one of 0.43. 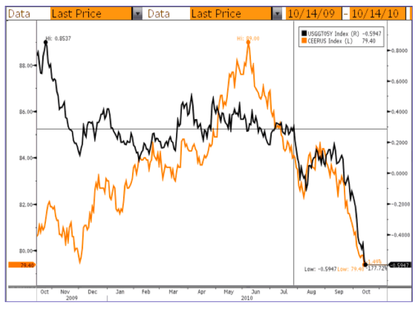 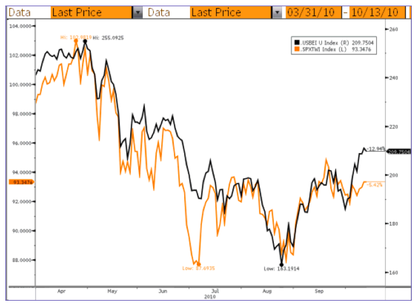 As for those BEIs themselves, they have moved appreciably higher, gaining 40bps at the front of the curve and around 65bps five years out, surpassing those in Europe for the first time since May and moving the two to their largest differential since before the crisis broke open in 2008. 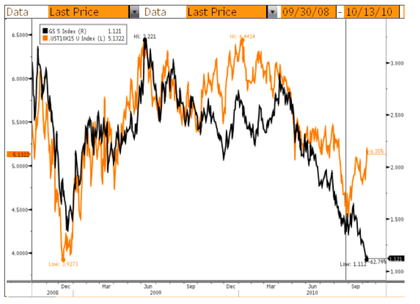 Nominal yields have also diverged smartly across the maturity spectrum, with 5-year zeros shedding 27bps to reach an inordinately low 1.07% while their equivalent bucket, ten years further up the curve, have added 75bps, pushing the spread between them to seven year highs and the ratio off the chart. 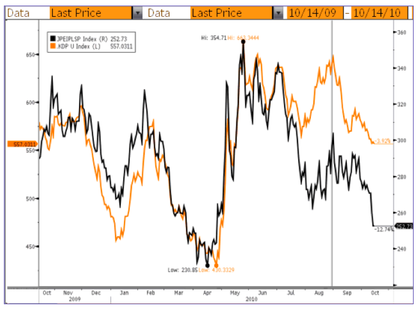 As for ‘risk’, the ITRAX Crossover index lost a quarter of its 200bps starting point before recouping some of the loss; VIX levels declined almost 40% to stand a mere 250bps above their post-Crisis lows; junk spreads have fallen 85bps, and EMBI’s 50bps. EM equities have finally regained their pre-Tequila highs v MSCI World ones.

All this has not only meant that the Value Line index has climbed 18.5% – with small caps outperforming mid and mid, large – but that the NASDAQ 100 has surged to its best since Xmas 2007 – reaching its highest v the S&P since the Tech Bubble burst. The furore has also been enough to push commodities up 17.5% with the four main sub-sectors (base & precious metals, energy, and agri) all participating with similar levels of gusto. 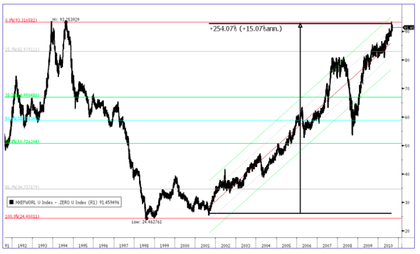 It has also seen renewed, breathless coverage of junk bond markets in the press – just like Michael Milken days, according to one recent story. Highly-leveraged, private equity buy-outs are also making the headlines; hedge funds are again attracting big money; while the stampede to chase the emerging market bandwagon has already led to more inflows in calendar 2010 than in any previous full-year period, adding greatly to distortions and, hence, dangers there, too.

In short, every single one of these developments demonstrates that Mr. Bernanke’s campaign against deflation has been succeeding only too well of late, with consequences to come at which we can only shudder for, when this next bubble bursts, it will all too probably collapse what little reconstruction work has taken place atop the rubble of the previous one.

Martin Hutchinson and Kevin Dowd* * Hutchinson (karlmagnus.aol.com) is the author of the Bear’s Lear column, http://www.tbwns.com/category/the-bears-lair/. Dowd (kevin.dowd@durham.ac.uk) is professor of finance and…