In early 2015, after years of China’s massive debt pile being roundly ignored by most so-called experts (despite being profiled here many years prior), McKinsey released a report showing that not only has the world not delevered since the financial crisis, adding well over $60 trillion in debt (through 2016), but also revealing in a format so simple even an economist could grasp it, just how massive China’s all-in leverage has become. 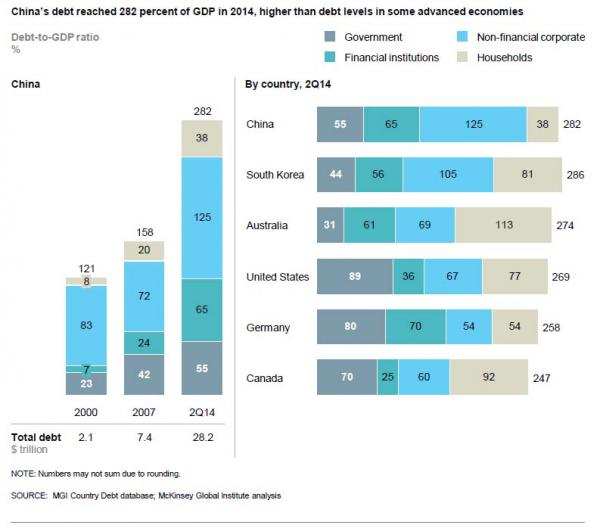 Those same people may be just as shocked to learn that according to the head of financial markets research Asia Pacific at Rabobank, Michael Every, not only has China not begun to delever at all, but since McKinsey’s update, its debt has risen by another 70% of GDP!

According to Every, China’s 2015 debt-to-GDP might be as high as 346%, and while that is in line with wealthier developed economies but is “vastly higher” than any EM peer.

Cited by Bloomberg, Every adds that the time-frame for debt accumulation pre-crisis varies, but what always follows is a major currency drop afterwards, as has happened even with reserve currencies such as dollar, yen, euro and pound.

He also adds that nominal GDP needs to rise faster than debt for a sustained period if deleveraging is to truly be under way, aka Dalio’s beautiful deleveraging thesis. The problem, however, is that with even Goldman admitting that China’s real GDP growth rate is about 4.5%, China’s debt load is rising orders of magnitude faster than its underlying economy and is on the daily verge of entering the final phase of the Minsky Moment breakdown.

While no surprise to people with common sense, Every concludes that debt must be repaid with interest, which acts as a drag on economic activity, and is the reason why such monstrous debt loads always lead to an economic collapse; making matters worse is that in China cheap credit is channeled to state-owned firms with low or no profitability.

So what happens next? Every believes that China has no choice but to proceed with a massive devaluation, far bigger than the prevailing consensus, and expects the Yuan to plunge to 7.60 against the dollar over the next year.

Some more thoughts from the Rabobank analyst:

“Despite vociferous PBoC rebuttals that such currency forecasts are “ridiculous” and “impossible” there are a wide variety of arguments to explain that view, including: Slower growth, interest rate differentials with the US as monetary policy diverges, declining export competitiveness and net capital outflows and declining FX reserves.”

And of course, massive debt, record NPLs and a wave of commodity-related bankruptcies. Every said that the single strongest reason to be bearish on CNY is the debt build-up. When debt-to-GDP rises as rapidly as it has, and to as high (and rising!) a level as it has in China, a weaker currency invariably follows.

In short, a CNY decline of 6% to date is nowhere near an adequate response to the fundamental problems China has.

As such, 2016 is likely to see CNY remain under downward pressure.

“So will the economy, which is desperately in need of real reforms. Of course, China has shown that it can take radical action when needed. However, the most recent example was to drain the CNH market of liquidity rather than allowing it to continue to depreciate and so reflect the lack of radical action elsewhere. CNH is now compliant, but the internationalization of the currency has been significantly set back. Let’s hope that same energy can be channeled into a broader reform process ahead.”

We are far less optimistic: yes, there will be reforms, but only after the government has no other choice, which means that they will take place only after the crash.

0 replies on “Zero Hedge: This Could Be A Problem: China’s Debt-To-GDP Rises To A Gargantuan 346%”