Following this week’s FOMC Minutes shows, which violently repriced June rate hike odds from 4% to 30% and July from 20% to 50%, the cries of lenienecy have begun, and nobody is doing so louder than Deutsche Bank which in an overnight credit summary note tries to make it clear that “the market is not ready for a June hike.”

Why is Germany’s largest bank, whose stock price is trading just barely above 52 weeks lows and level not seen since the financial crisis so worried? Simple: “the hawkish minutes will weigh on risk, bias yields lower, and flatten the curve” for the simple reason that the Fed is so clueless it “seems to be interpreting recent easing in financial conditions as an opportunity to force rate expectations higher.” Instead, the Fed is once again confusing cause and effect, and DB says the “ease in financial conditions occurred precisely because of the Fed’s dovish turn earlier this year.” Hence why DB is confident a hawkish turn will push markets right back where they were in December and January, prior to the February Shanghai Accord.

Of course, we already gave this explanation last fall, just before the Fed’s December rate hike. It’s time to give it again, and amusingly, DB agrees because as Dominic Konstam writes, “If you think you’ve seen this movie before it’s because you have.”

Alas, it is indeed deja vu all over again:

Like during 2015, the Fed appears bent on pushing rate expectations higher, and the operative question is whether the more hawkish turn to Fed rhetoric will up-end risk and tighten financial conditions to the extent that a rate hike is imprudent if not impossible given the latent fault lines in the global economy.

Last year the Fed attempted to prepare the market for a September hike at the June meeting with a decidedly negative result, and then had another go in October for the December meeting with the result that markets tolerated December lift-off before coming apart early in 2016. The operative question is whether markets are sufficiently calm for the Fed to use the June 2016 meeting to pave the way for a July hike.

And this is why Deutsche Thinks that just like in July/August and January/February, as the market starts to earnestly pricing in a June/July rate hike, everything is about to plunge once more:

We think the answer is no because the issue is not just the timing of a single hike toward some static goal for rate level in 2017. What is at issue is the existence of some Shanghai “accord” whereby global policymakers have agreed explicitly or implicitly that excessive dollar strength is counterproductive and that policymakers should shift their focus to domestic demand and structural reform within an environment of dollar stability, at least through the next G20 in early autumn. If there is no accord then divergent monetary policy could drive the dollar stronger, restarting among other things speculation against CNH versus the dollar rather than CNY versus the entire CNY basket with now very familiar results: reserve loss exacerbating higher Fed expectations for US rates, and downward pressure on risk assets with a non-trivial chance that China might devalue and, worse yet, do so in a lumpy fashion.

Or just as we said on Thursday, it will be all up to China again to stop the Fed’s rate hike:

Still, assuming the Fed ignores Deutsche Bank’s laments for a reprieve – because as we saw in February, DB may well be the first bank to go under should the market be swept by another global round of risk off – this is how a rate hike could take place.

The risk is that the Fed might use the June meeting to pre-announce a press conference around the July meeting, or in some other way “pre-commit” to a July hike. The issue is that with still benign wage pressure and inflation, premature and more aggressive Fed hikes would drive real yields higher for the wrong reason.This is the policy error scenario. Yellen’s timeout drove real yields roughly 70 bp lower from the late 2015 highs, but levels have already more than doubled from the lows by virtue of little more than “why not raise rates for the sake of it” rhetoric. What Fed officials seem to be suggesting is that they might be growing increasingly nervous about low real rates fuelling asset classes like equities, investment grade credit, and gold even though other risky assets such as high yield and emerging markets do not perform  well absent higher breakevens. The risk case is then that an overly aggressive Fed would push real yields up and breakevens down, thus undermining risk assets generally.

But which risk asset is at most, pardon the pun, at risk? 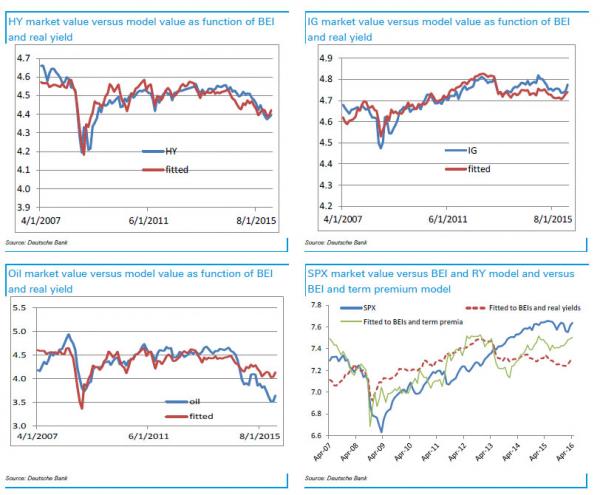 The outlier appears to be SPX, where valuations appear excessive given the breakeven/real yield framework.

And while DB’s points are mostly valid, its agenda becomes fully transparent with the next sentence:

This is not to say that the Fed can never raise rates because of negative impact on financial variables, but it is far from clear to us that the Fed should be hiking against financial market froth when many asset classes have only partially recovered from losses last year.

Actually that’s exactly what it says (ignoring the pleas by all those hundreds of millions of elderly retirees whose only source of income used to be interest income and who have been left for dead under a central bank regime which only caters to its commercial bank owners) and the longer the world eases financial conditions, either via QE or ZIRP or NIRP, the more impossible it will be for the Fed to ever hike; in fact the next big move will be just the one Deutsche Bank has been begging for all along – unleashing helicopter money.

In fact, we are confused by Konstam’s note: if indeed DB wants (and needs) a monetary paradrop (recall “According To Deutsche Bank, The “Worst Kind Of Recession” May Have Already Started”), then a policy error is precisely what the Fed should engage in.  Not only will it send markets into a long, long overdue tailspin, one from which the only recovery will be the bubble to end all bubbles, the end of monetarism as we know it courtesy of the quite literal money paradrop, but reset not just the US economy but that of the entire world, in the process wiping out tens of trillions in unrepayable debt, and allowing the system the much needed reboot we have been urging ever since our start in 2009.

We are confident that just like everything else predicted on these pages, it is only a matter of time now before this final outcome is also realized.

Written By
Other Writer
More from Other Writer
By Jonathan Newman The FOMC has consistently overestimated future Fed Funds Rate (FFR)...
Read More