“There is no simple, painless solution. The world has to reduce debt, shrink the financial part of the economy, and change the destructive incentive structures in finance. Individuals in developed countries have to save more and spend less. Companies have to go back to real engineering. Governments have to balance their books better. Banking must become a mechanism for matching savers and borrowers, financing real things. Banks cannot be larger than nations, countries in themselves. Countries cannot rely on debt and speculation for prosperity. The world must live within its means.”

There is now almost $16 trillion worth of sovereign debt trading with a negative yield. Last week the credit bubble entered new territory with two euro zone issuers of corporate debt, Germany’s Henkel and France’s Sanofi, joining them. This may, just may, happen to mark the top of the great bond bull run that started as far back as the early 1980s. By Friday of last week, the implications of an ugly slide across bond and stock markets may have led some fund managers and traders to soil themselves, or suffer heart problems, or both. By a happy coincidence, however, Henkel makes Persil laundry detergent, and Sanofi makes treatments for cardiovascular disease. So any affected “investors” dumb enough to have bought those guaranteed loss-makers and then suffered immediate regret don’t have to look too far for a remedy. 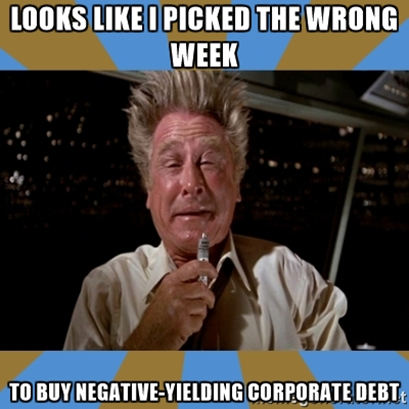 If a doctor maintained a treatment regime that resulted in the deaths of most of his patients, sooner or later he would get struck off. Pull the same trick in the guise of a central banker, and journalists will write books about you with titles like ‘Maestro’ and ‘The Man Who Knew’. (If you’re Ben Bernanke, you’ll have to write them yourself and title them ‘The Courage To Act’.)

“One of the pillars of 2016’s record-setting global bond rally is starting to buckle. Japan’s sovereign debt is suffering its worst rout in 13 years, handing investors bigger losses over the past two months than any other government bonds amid speculation the Bank of Japan plans to change its asset-purchase strategy. The reversal is spurring concern the second-largest debt market is the vanguard for a broader selloff… The impact of the BOJ’s stimulus is that the bond markets worldwide are becoming one market,’ said Chotaro Morita, the chief rates strategist at… SMBC Nikko Securities Inc., one of the 21 primary dealers that trade directly with the central bank. ‘If there’s a reversal of policy, you can’t rule out that it would roil global debt.’”

Yuval Harari, in his excellent history of mankind, ‘Sapiens’, points out that just about everything in the infrastructure of the modern economy is either some kind of narrative or myth. The buildings on Wall Street and in the Square Mile may be solid enough, but the rest of the fabric of our financial system is dependent on trust or collective belief rather than the material and the ‘real’.

Money, for example, is based on two universal principles:

Note that use of the word ‘trust’. Our monetary system requires mass collective belief. When administrations abuse the public trust – as central banks do today by printing money out of thin air and using it to buy shares in productive businesses that the rest of us had to sweat for, in order to purchase them – they run the risk of shattering the system they were instituted to protect.

And our concept of money is extraordinarily fragile. At one point it had literal substance, in the form of precious metals or other commodities. But since 1971 it has been entirely virtual, and backed by nothing but the promises of politicians.

“Less than 8 percent of all dollars are in the form of paper money or coins. The vast majority of dollars exist in the form of entries in the accounts of borrowers or lenders. Paper money is an abstraction or, as most of it does not exist physically, the abstraction of an abstraction. Its sole reason for existence is as a medium of exchange. There are no limits to the amount of money that can be created.”

Which is a principle that the central banks have come dangerously close to abusing.

The bond sell-off of early September 2016 may turn out to be just another blip in the extraordinary bond bull market. It is too early to tell. But confidence, or trust, in an illusory belief system backed by nothing of substance does not proceed in a linear fashion. It lasts until it snaps, unforecastably, like a tree branch burdened by too much weight. All we can do is note when the system has shifted from being stable to critically unstable – a point which it has surely reached now.

Taper Tantrum II – if this is what it is – can only have three outcomes.

One is that the central banks elect to do nothing. Markets may or may not calm down of their own accord. (One suspects they have become too addicted to free money to relinquish it easily now.)

One is that the central banks decide to do something. Another (doomed) iteration of QE, perhaps – Helicopter Money ? And the market panic subsides.

One is that the central banks decide to do something. And the market panic does not subside.

Nobody can say with any degree of certainty what the probability of each of these outcomes is. On the basis that the probability of the third outcome is in any way higher than zero, there is a plausible case for owning real assets at sensible prices – in as much as they can be determined in a world of financial repression – over purely nominal assets that will be obliterated by a generalised loss of confidence in the system.

It is time for central banks to start acknowledging their limitations, and doing so by acting and not talking about their future intentions. It is also time for investors to stop believing that central banks had the answers to begin with. Or as Ben Hunt puts it,

Written By
Tim Price
More from Tim Price
“I can say therefore with confidence – and without any complacency –...
Read More

0 replies on “Ease this”