“The enthusiasm for Snap came despite the decision by some portfolio managers to shun the stock over concerns about the company’s decision to issue shares with no voting rights, a first in the US, and to ensure control for the co-founders even if they leave the company. In addition, some analysts questioned whether an app with no profits and fierce competition from other social media groups warranted such a lofty valuation. Last year the company recorded a net loss of $515m, up from $373m in 2015, on revenue of $405m..

The Onion got there first. No amount of knowing, middle-aged smugness at the apparent absurdity of the Snap IPO can rival their November 1999 story,

“Anabaena, a photosynthesizing, nitrogen-fixing algae with 1999 revenues estimated at $0 billion, will offer 200 million shares on the NASDAQ exchange next Wednesday under the stock symbol ALG. The shares are expected to open in the $47-$49 range.”

Nevertheless, enough ‘investors’ have got together to give Snap a market capitalisation, for the time being, at least, of $31 billion. Perhaps Stanley Weiser was right when he suggested that a fool and his money are lucky enough to get together in the first place. Beyond the subjective assessment of Snap’s inherent worth, its IPO appears to provide further  confirmation that millennials have little to offer the world beyond a myopic focus on self-obsession. And one can hardly blame Wall Street for giving people what they think they want: if the ducks are quacking, feed them.

Strange things happen toward the top of markets. Market breadth evaporates, leaving a handful of companies to drive the indices higher. (As SocGen recently pointed out, while the very largest US corporates are profitable, the rest of the market has seen the trend in return on equity declining for years.) 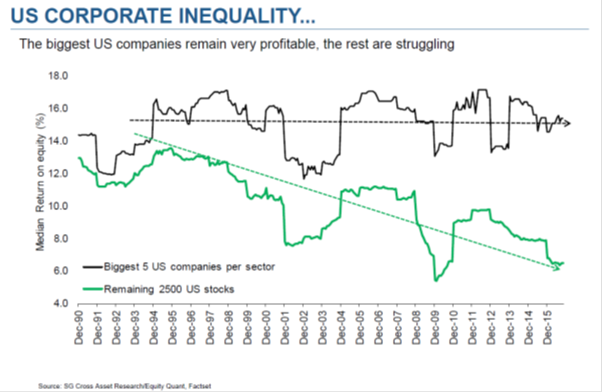 More prudent asset managers start haemorrhaging capital. Investors willingly back loss-making companies which offer shareholders no voting rights, and which have a corporate logo of a vomiting ghost.

J.K. Galbraith called it “The mass escape from reality”:

“Built into the speculative episode is the euphoria, the mass escape from reality, that excludes any serious contemplation of the true nature of what is taking place..

“Contributing to and supporting this euphoria are two further factors little noted in our time or in past times. The first is the extreme brevity of the financial memory. In consequence, financial disaster is quickly forgotten. In further consequence, when the same or closely similar circumstances occur again, sometimes in only a few years, they are hailed by a new, often youthful, and always supremely self-confident generation as a brilliantly innovative discovery in the financial and larger economic world. There can be few fields of human endeavour in which history counts for so little as in the world of finance. Past experience, to the extent that it is part of memory at all, is dismissed as the primitive refuge of those who do not have the insight to appreciate the incredible wonders of the present.”

As we have observed on numerous occasions recently, US stock markets are not cheap. Robert Shiller’s cyclically adjusted p/e ratio for the S&P 500 (CAPE) now stands at 29 times:

See if you can spot the last time that the market peaked at this valuation. Clue: it was Black Tuesday, 1929.

But the Shiller p/e has been higher than this before. Unfortunately, the period in question sets an ominous precedent, because it was the first dotcom boom, during which Pets.com, for example, whose mascot was a sock puppet, went from IPO to liquidation in 268 days. The ducks were quacking then, too.

Chronicle of a death foretold 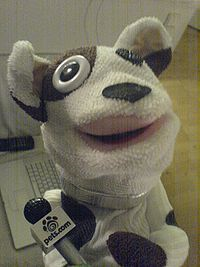 None of which is meant to suggest that the US stock market is about to crash. The 1990s experience of the Shiller p/e shows conclusively that valuations can remain elevated for some considerable time – at demonstrably higher levels than today’s.

But it is meant to suggest that investor expectations today – most notably in the US stock market – are unhealthily unrealistic. The Economist points out that CalPERS has just cut its assumed annual return from investments from 7.5% to 7%. With 10 year US Treasury bonds yielding just 2.4%, CalPERS has its work cut out.

One rational response to apparent overvaluation today would be to short the market instead. But that leaves the market sceptic open to the potential of unlimited losses and the perils of market timing.

A more moderate response would simply be to look elsewhere instead in pursuit of attractive returns. In their essay ‘What has worked in investing’, Tweedy Browne propose a variety of investment approaches that have generated exceptional returns. One of them is Benjamin Graham’s “net current asset value” stock selection criteria:

“In the 1973 edition of The Intelligent Investor, Benjamin Graham commented on the technique:

“It always seemed, and still seems, ridiculously simple to say that if one can acquire a diversified group of common stocks at a price less than the applicable net current assets alone — after deducting all prior claims, and counting as zero the fixed and other assets — the results should be quite satisfactory.”

There is one developed market where there are innumerable “net current asset value” stocks still available, and where over 40% of stocks are trading below book value. It is a market where a triumvirate comprising the central bank, the government’s own pension fund and that country’s own companies are all buying, or buying back, stock aggressively. It is a market where dividends are relentlessly on the rise. It is a market which is an oasis of calm in a world of political uncertainty. Investments in this market form the single biggest allocation in our fund. This market is Japan.

Written By
Tim Price
More from Tim Price
“Isn’t it funny when you walk into an investment firm and you...
Read More