One month ago, when looking at the sudden change in ECB bond purchasing patterns, especially of German Bunds, we reported that the central bank may have as little as 4 months of space left in its PSPP program when it comes to German bond purchases. The first thing that caught our eye was that based on calculations from ABN Amro’s Kim Liu based on ECB bond-buying data published at the start of May, the ECB bought roughly 400 million euros fewer bonds in Germany in April than its rules allow, suggesting a severe scarcity of eligible bonds.

“It was by far the largest deviation, at least for Germany, and for me suggests that on top of the political stress and smoothing of purchases, there are scarcity constraints for the Bundesbank,” said Pictet’s senior economist Frederik Ducrozet. “What it means is that the ECB has to be very cautious with its exit and if they don’t taper within less than six months (of ending the programme) something might have to give.”

In addition to the sharp drop in nominal purchases, the ECB data also revealed that in just six months the average maturity of monthly German debt purchases by the ECB has dropped to under five years from more than 10. 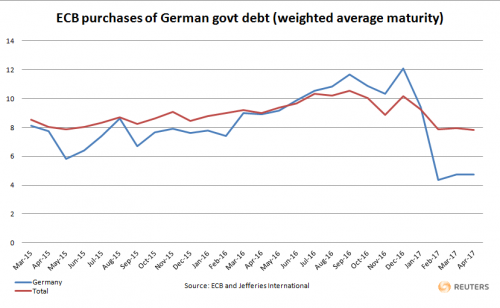 That indicated that a shortage of longer-dated eligible debt is forcing the Bundesbank, which buys securities on behalf of the ECB, to take advantage of recent rule tweaks to buy more shorter-dated bonds. Still, while that shift was expected after last December’s change allowing the ECB to buy bonds yielding less than the -0.40% depo rate, analysts admitted that “the speed at which the Bundesbank put that to use has taken markets by surprise.”

The shortfalls prompted questions about how close the ECB is to hitting its bond-buying limits in Germany, the euro zone’s benchmark issuer and (at least until now) the deepest and biggest source of bonds under the ECB’s QE program which is currently scheduled to run until the end of 2017. According to Barclays calculations, if the ECB maintains its buying program as is, it would hit its mandated, 33% ceiling on German Bund holdings as soon as soon as October, or just over 4 months from now.

Fast forward to today when the ECB reported its latest monthly purchase data for the month of May and it revealed even more troubling trends: in May, the weighted average maturity of monthly PSPP purchases rose in France, Italy and Spain, but plunged in Germany. 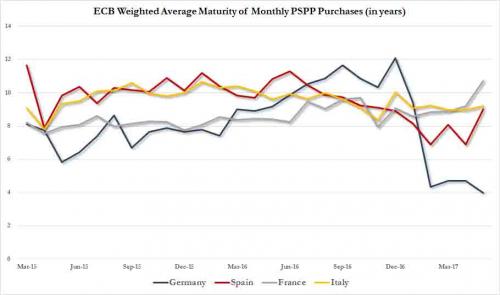 As the chart below shows, last month the average maturity of all German purchases plunged below 4 for the first time ever, or just 3.98 years, the lowest on record. 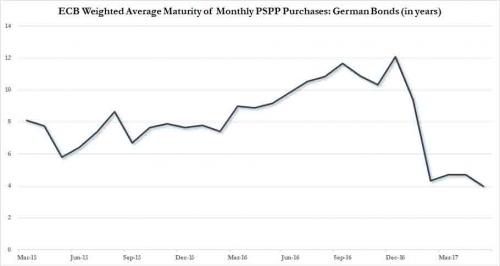 But perhaps more interesting is that as Jefferies pointed out, since QE was reduced in April from €80bn per month down to €60bn, there has been a disproportionate reduction in asset purchases by country (see second table below). For instance in Germany and in the Netherlands (and Spain) PSPP quantities had fallen by around 30% in the last two months; but in France and in Italy, the figure is only around 21%. 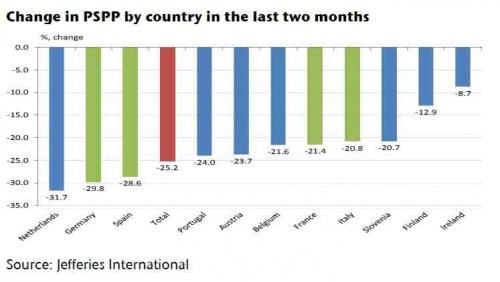 This confirms that in order to give itself as long as QE runway as possible, the ECB is actively reducing the amount of German Bunds it is purchasing every month, and is also increasingly shifting to the short end of the curve as it appears to have run out of longer-dated bonds to buy. Of course with QE likely to run for at least another year, these country differences could very well increase as the scarcity of bonds in certain markets becomes more of a problem – unless the ECB amends some of the rules around the PSPP.

Some parting thoughts just two days ahead of the ECB’s much anticipated meeting.

For now, the ECB has been lucky: the economic situation in Europe has been improving, with inflation posting a modest pick up, and all signs suggesting that Mario Draghi will be able to taper – not because he wants to but because – as the charts above show – he has to. In mid May, ECB board member Yves Mersch said the ECB was close to replacing its negative view on whether the euro zone economy would reach growth targets with a neutral one, providing yet another justification to reducing its unsustainable bond purchases.

As a reminder, in December the ECB already tapered its monthly purchases by €20 billion to €60 billion in April, while money markets price in roughly a 70 percent chance of a rate hike in early 2018.

“The ECB can always get around its rules, it has the flexibility on whether to buy central government or local government or agency debt to fulfill its quotas,” said Marchel Alexandrovich, senior European economist at Jefferies. “But the longer QE goes on, the more the ECB will have to think about changing the rules again … And the issue now is the willingness to carry on with QE.”

And as for European false dawns, just ask Jean-Claude Trichet and the infamous rate hike of 2011 which launched the most serious leg of the European sovereign debt crisis. Should Europe’s economy turn south again just as the ECB is tapering its purchases and/or raising rates, and the central bank be forced to keep or even boost its QE, Mario Draghi will suddenly find himself in very big trouble. That, or simply do what the BOJ has been doing for years, and start buying ETFs and single stocks.

One final point: even if all goes according to plan, recall that the only reason stocks are at all time highs, is due to the $250 bilion per month, or $1.2 trillion YTD – an all time high – in central bank purchases; purchases which are only thanks to the ECB and BOJ. With both banks now actively contemplating tapering their asset monetizations, the outlook for risk assets is anything but good. 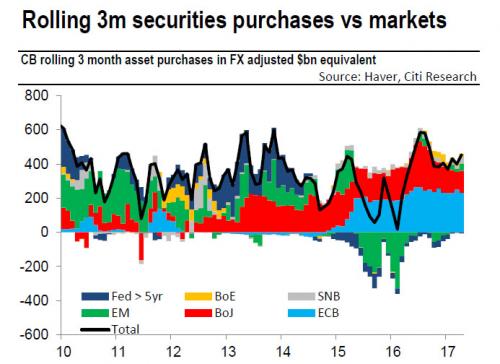 Written By
Other Writer
More from Other Writer
Is the global economic recovery over? That is the question investors are...
Read More

0 replies on “Zero Hedge: The ECB Has Almost Run Out Of German Bonds To Buy”