Following the disappointing for Angela Merkel and her CDU German election results, which propelled the populist AfD into Germany’s political establishment with 92 members of parliament, the first casualty was Germany’s finance minister, Wolfgang Schäuble, who in a few days will relinquish his long-held post and move on to the ceremonial role of Bundestag president. As part of his farewell tour, Schäuble – like so many other former members of the establishment- took a parting shot at the system he helped create and warned that “spiraling levels of global debt and liquidity”, as well as “new bubbles” present a major risk to the world economy.

Speaking to the FT, the Europhile beloved in Germany for successfully steering one of the world’s largest economies for the past eight years, and who nearly led to Grexit in the summer of 2005, said there was a danger of “new bubbles” forming due to the trillions of dollars that central banks have pumped into markets. Confirming another fear widely propagated by the Putin propaganda alternative media, Schäuble also warned of risks to stability in the eurozone, particularly those posed by bank balance sheets burdened by the post-crisis legacy of non-performing loans, something we have warned about since 2012, and an issue which remains largely unresolved.

A strong advocate of fiscal rectitude and debt reduction, Mr Schäuble dominated Europe’s policy response to the eurozone debt crisis and has been vilified in countries such as Greece as an architect of austerity. But he will mainly be remembered as the most ardently pro-European politician in German chancellor Angela Merkel’s cabinet, skilled at selling the benefits of the euro and of deeper European integration to an often sceptical German public.

To underscore his point, Schäuble said that the Brexit vote last year had demonstrated how “foolish” it was to listen to “demagogues who say . . . we’re paying too much for Europe”. “In that respect they made a great contribution to European integration,” he said. “Though in the short term that doesn’t really help Britain.”

Ahead of his last finance minister meeting on Monday, Schauble “sought to reassure Germany’s allies that the AfD’s surprise success would not in any way affect the country’s commitment to liberal democracy.”

“There’s no chance Germany will ever relapse into nationalism,” he said. The AfD’s voters were dissatisfied, felt excluded, were angry about perceived injustice and worried about how the world was changing. “But there’s no reason to believe that democracy and the rule of law are in danger,” he said.

However, taking a broader swipe at the current financial regime, Schauble warned that the world was in danger of “encouraging new bubbles to form”.

“Economists all over the world are concerned about the increased risks arising from the accumulation of more and more liquidity and the growth of public and private debt. I myself am concerned about this, too,” he said echoing the concern voiced just one day earlier by IMF head Christine Lagarde, said the world was enjoying its best growth spurt since the start of the decade, but warned of “threats on the horizon” from “high levels of debt in many countries to rapid credit expansion in China, to excessive risk-taking in financial markets”.

Schäuble also echoed the latest warning from the BIS, which last month said that the world had become so used to cheap credit that higher interest rates could derail the global economic recovery.

Meanwhile, Schäuble defended austerity, saying the word was, “strictly speaking, an Anglo-Saxon way of describing a solid financial policy which doesn’t necessarily see more, or higher deficits as a good thing.” The soon to be former finance minister also took a pot shot at the UK:

“The UK always made fun of Rhineland capitalism,” he said, contrasting Germany’s consensus-driven, social market model with Anglo-American free markets and deregulation. “[But] we have seen that the tools of the social market economy were more effective at dealing with the [financial] crisis . . . than in the places where the crisis arose.”

Of course, Germany’s success – almost entirely a function of the common currency which has effectively kept the Deutsche Mark from soaring – has come at the expense of crisis after crisis among Europe’s southern states. Unfortunately it has resulted in an entire generation of unemployed youth in countries like Greece, Italy and Spain.

Still, in keeping with his dour image, Schäuble’s last words were pessimistic:

“We have to ensure that we will be resilient enough if we ever face a new economic crisis,” he added. “We won’t always have such positive economic times as we have now” concluded the jolly 75-year-old. 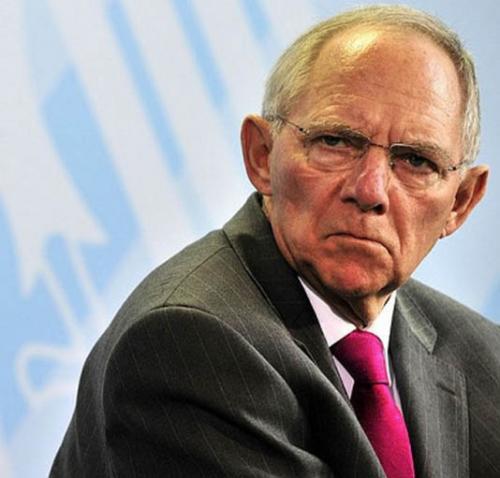 Perhaps Wolfi is worrying too much: after all, according to Janet Yellen, “we will not see another crisis in our lifetime.” And if we do, well central banks are primed and ready to injects trillions more to keep the artificial “recovery” and market “all time highs” can kicked just a little bit further.