When the world was on the gold standard, the fastest rate of economic growth happened between 1870 and 1914, when the gold standard was suspended in Europe because of WWI. Not only that, but blue collared workers then saw vast increases in their purchasing power. Had we stayed on the classical gold standard, wages would be higher and the middle class would continue to grow.

For example, in 1915, Henry Ford paid his workers $5 per day. At that time the price of gold was set at $20.67/oz. This means that in terms of gold (which was a legitimate form of payment and was easily redeemable into paper money) a blue collared factory worker was paid 0.242 oz. of gold per day. Assuming a 5-day work week and 40 weeks of work in a year, Ford workers could be paid 48 oz. of gold per year. Today the price of gold is $1200/oz; this means the Ford workers were paid $57,600/year in today’s money. This is significantly higher than what manufacturing jobs pay today.

Similarly, in 1965, the minimum wage was $1.25/hr (5 silver dimes) and under the Bretton Woods Agreement, silver was $1.25 per ounce. Today silver is $15/oz and hence workers would have had a purchasing power of $15/hour in today’s money.

This implies that it is government control over a nation’s monetary system, which has allowed the middle class’s income to be eroded by inflation. While the CPI may show us that central banks have kept inflation under control, once we use precious metals as a measurement, the cost of goods and services have gone up much higher than what current inflation would suggest.

As a result, it is the poor and middle class who get hit the hardest by this inflation and the wealthy the least. This explains why many socialists make the claim that the wealthy are profiting off the poor and middle class and why many countries have become increasingly unequal since 1971. As a result, a return to laissez-faire capitalism is the solution- ending the government monopoly of money and replacing the monetary system with a 100% gold standard.

During the 1880s, US real GDP per capita grew by 3.8% per year, labour productivity increased 23% and consumer prices fell by 4% in the decade, hence supporting the assertion that it is ensuring a stable value of the nation’s money that ensures that jobs pay well enough. Between 1880 and 1896, prices fell by 30% and real GDP increased by 85%, significantly faster than post 1971.

Furthermore, a gold standard leads to much more predictability of the price level. Between 1775 and 1910, the US price level was level (according to the BLS). Imagine a worker made 1 ounce of gold per month in 1820. Between 1820 and 1860, the price level fell by 53%, meaning that 1 ounce could buy more goods and services and hence gold is more ‘valuable’. This stimulates miners to mine more gold, therefore increasing the money supply, and hence inflation. The net result is that over a 100-year period, the price level is basically level. This creates more certainty for investors who know where the price level was going to be, hence stimulating more investment.

With the gold standard guaranteeing the value of money, this reduced bond yields for corporations and governments. When Britain returned to the gold standard after the Napoleonic War (in 1821), the UK government issued a 100-year gilt at a yield of 3.14%. This yield was achieved without central banks increasing their balance sheets. In the United States, railroad companies issued long term bonds at a yield of 3.18%. These low yields reflected the confidence investors had that they would make a return. Currently, a 30-year Treasury bond or Gilt would not generate returns because investors lose money because of inflation.

This also implies that deflation causes an economic catastrophe as many monetarists and Keynesians claim, is absurd. One period that is often cited as a ‘depression’ is the ‘Long Depression from 1873 and 1896, where sustained deflation meant that the world economy struggled. The Keynesians and Monetarists are right that there was a depression in prices but not economic activity! According to NBER, between 1879 and 1896, nominal median wages grew by 23% and prices fell by 4.2%! This implies that the real consequence of the long depression was real wage growth. According to Friedman and Schwartz, US real GDP per capita rose by 4.5% per year from 1879 and 1889.

Today many blue collared workers struggle to make ends meet and are extremely pessimistic about the future. Many have argued that the US and Europe have turned to populist politicians and anti-establishment parties because of people’s dissatisfaction with their future. Many of Europe and the U. S’s poor complain about inequality and high cost of living. The experience of the 1880s shows that prices fell compared with the rapid rise in the general price level post-1971: 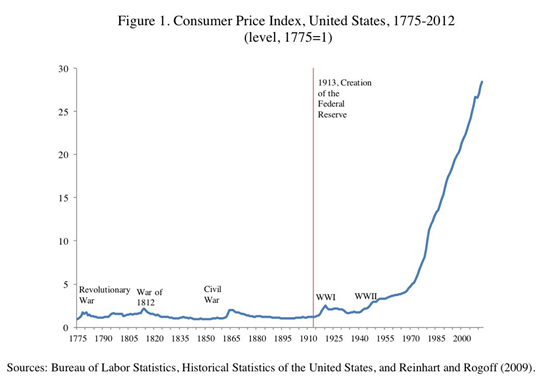 As shown above, there is almost no price inflation between 1775 and 1910. This is the consequence of the gold standard.

While the overall economic performance between 1971-2017 in the developed world hasn’t been as good as pre-1971, the 1980s and 1990s were a time of very rapid economic growth. It was the 1970s and the 2000s that had far less economic growth. The 1970s saw stagflation and the 2000s saw growth below 3%/year, then the 2008 crash and a very slow recovery since. Between 1981 and 1999 (Reagan, Bush Sr. and Clinton administrations), 40 million net new jobs were created, the stock market increased 15-fold and economic growth averaged almost 4% per year.

The data shows that even when the world was off the gold standard but gold prices were stable the economic prosperity seen during the gold standard was somewhat replicated in the 1980s and 1990s. The reason is that guaranteeing a stable currency creates more certainty, which in turn creates more investment. This is certainly true of the 1980s and 1990s, which saw a technological revolution as well as increases in real median household income. Imagine how much growth could be achieved if the world returned to the classical gold standard before WWI whilst also maintaining a 100% reserve gold standard.

One of the main barriers to countries trading with each other is not only the fluctuation of currency on the FOREX markets but also the current valuations of a particular currency may be inaccurate. For example, many politicians worry that the Chinese Yuan is undervalued. Converting to the gold standard was correct these imperfections by certain countries experiencing an outflow of gold or vice versa.

Once we have a 100% gold standard, it will also be possible for every country to disband its currency so that gold is used as money anywhere in the world. Gold would be acceptable in China as it would in the UK. As a result, there’d be no foreign exchange risk. This would create much more certainty for investors and as a result, countries could experience more FDI.

Also, it would be much easier to trade goods and services with other countries now that there is no currency risk. This would make trade easier. Benefits of more trade include increased competitiveness and productivity and destruction of monopolies, as they now have to compete worldwide. Most importantly more trade could lead to cheaper products for consumers and hence higher real incomes. Furthermore, trade and FDI would be made easier because of a fixed exchange rate. The fixed exchange rate would allow entrepreneurs and consumers to know the cost of their raw materials. Under floating exchange rates, a British businessman who imports steel from the U.S cannot accurately predict what his steel will cost 5 months’ from now. This uncertainty makes international trade less attractive as a result. According to Forbes, during the international gold standard system (1870-1914) saw large increases in trade. In 1870, world trade accounted for 10% of GDP but by 1914, it accounted for 21% of GDP. Keep in mind, world trade is much easier today than in 1914. There were no large cargo ships in 1914, communicating with foreigners was almost impossible and the 1800s was a time where the consensus was protectionism (except in the UK, where the Corn Laws were repealed).

In the gold standard system, the currency of each country would not be money per se; it would simply be a defined substitute for real money- gold. For example, before WW1, the £ sterling was equivalent to 1/5th of an ounce and the $ was 1/20.67th of an ounce. This made the exchange rate fixed at $4.86 per £. Critics argue that fixed exchange rates are price fixing and what if $4.86/£ was ‘over-valued’. The system would self-correct via the price-specie flow mechanism. Another problem with fixed exchange rates (such as the Saudi Rial to the US$) is that it is not sustainable. The price-specie flow mechanism would correct any imperfections, thereby forcing the exchange rate to always reflect $4.86/£.

It is impossible to suddenly transition into the classical gold standard system like before WWI. As a result, we would have to take baby steps in the transition to a 100% gold standard economy. The government could start off by simply allowing private banks, citizens and businesses to accept gold as a legitimate form of payment. The government would not set the price of gold like in the international gold standard system ($20.67 per ounce), but instead, people would decide the true value of gold based on whether they prefer gold to the Federal Reserve note.

Alternatively, the IMF could create a monetary order. Suppose the new order stated that 1 ounce of gold was £500 sterling. The UK would then have to cut the M1 money supply according to how much gold is held in the UK. There is a total of 300 tons of gold in the UK. The current gold price per ton is £30 million. This puts the total value of gold

Written By
Other Writer
More from Other Writer
by Brittany Hunter Venezuela is a disaster; this is an indisputable fact. When...
Read More

0 replies on “The Case for A Gold Currency Part 2: Wages and Growth: Higher Under Classical Gold Standard”