“Japan was the dress rehearsal; the rest of the world will be the main event.”

“Twitter has taught me a couple of things. 1: there are some incredibly brilliant people in the world. 2: they are vastly outnumbered.”

There are weeks when decades happen, and this past week feels like one of them. While US inflation expectations touched a four-year high and 10-year US Treasury yields reached seven-year highs, the voters of Italy – or rather its anti-establishment Five Star Movement and its far-right League – delivered a resounding raspberry to the EU and any lingering hopes for faster and smoother European integration. Two years ago, in this commentary, we were conveying our relief that the UK had finally elected to sever its political ties with a failing totalitarian socialist economic bloc. Now, displaying – if possible – even more political incoherence, the Italians are having a go. You can see below, courtesy of the Daily Telegraph, why they might have a point: 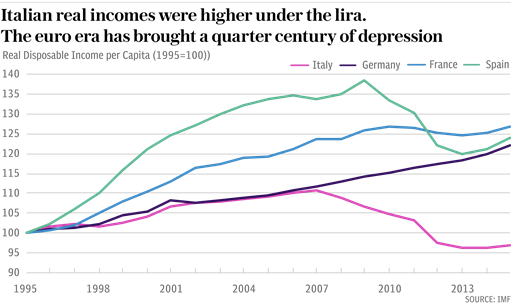 What follows is what we wrote in the giddy days of June 2016:

The euro zone is a latter-day gold standard. Because its member countries have no control over their own monetary policy, they must accept a one-size-fits-all model. But what is appropriate today for an economy like Germany’s is unlikely to be appropriate for an economy like that of Greece. (Which should never have been allowed to join in the first place – but then institutionalised corruption is another of the euro zone’s fatal flaws. Are the EU’s accounts and payments “free from material error” ? On this basis they haven’t been signed off by the EU’s own Court of Auditors for over 20 years.)

The euro zone is simply too big to function properly. Given the widely various cultures of the euro zone, it was always going to be a big ask for such a diverse patchwork of countries to try and move lock-step together.

As JP Morgan’s Michael Cembalest points out, there is disturbingly little commonality amongst those disparate cultures. The graphic below shows DNA mappings of European citizens (courtesy of Current Biology Magazine, August 2008). While genetic variations are relatively small, those variations are tied very closely to geography. As Cembalest observes, by grouping similar DNA results together, we get something that looks very much like a map of Europe – a map that reflects “hundreds of years of migration, weddings, funerals, births, language, values passed to children, circumstances that call for charity, sacrifice, revenge and everything else that defines ‘culture’.” 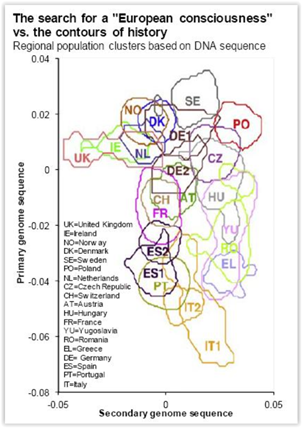 “The map shows clear patterns of ancestry tied to geography, which is perhaps why the EMU was designed to retain the region’s fiscal, economic and cultural identities. Perhaps we should not be surprised that Northern Europe is struggling with whether it will mortgage its future to save the South.”

And perhaps the ultimate will to save Europe simply does not exist. “In terms of shared experiences and values measured by anthropologists, and the contours of history implied by genetic research, they may not have enough in common. It took almost 150 years for the US to reach the same point in its history, when it began to cede more control to a Federal, centralised government.”

Whenever sceptics expressed concern at the EU’s uncertain direction of travel and its acceleration regardless, it was met with a standard response: the answer is more Europe. Well, not any more.

Leavers are often accused of having a selective memory when it comes to history – this fine piece should serve as a useful restorative against that slur. But back to May 2018 (the month, not the embattled British Prime Minister and Remainer once described by a certain MEP as “possessing all the charisma of a broken I-speak-your-weight machine”). As Ambrose Evans-Pritchard put it for the Daily Telegraph,

Brussels has at last met its political match. Just as Brexit was the first referendum that the EU could not overturn (though hopes persist), Italy’s revolt is the first act of really serious defiance by a eurozone state that cannot be broken.

It would be courting fate for the EU authorities to risk an existential battle with a big EU founder-state when it is already fighting brush-fires across half of Eastern Europe, and after having already lost Britain through inflexibility, misjudgement and strategic ineptitude.

In response to the news from Italy, Professor Clemens Fuest of Germany’s IFO Institute warned that the European Central Bank might have to cut off Target2 credits to the Bank of Italy within the EU’s internal payments system, bringing the crisis to a head:

If they start to violate eurozone fiscal rules, the ECB will reluctantly have to act.  It will be like the Greek crisis. Italy will have to introduce capital controls and will be forced out of the euro.

It would be a massive blow but I think the euro would survive with France and Germany, and Spain still in there. It would be a different euro..

To which, one Telegraph reader helpfully replied:

Perhaps it is as well that we continue to only negotiate with ourselves. In time, there might be no one to negotiate with, over there.

But Italian politics have long been a fertile source of humour during dark times. Developments in the world’s capital markets cannot be brushed off quite so easily. The skies are beginning to darken with the chickens of past macro interventions coming home to roost. The US dollar is rallying, the oil price is spiking, the Fed is attempting to contract its balance sheet, bond yields are surging, and meanwhile – as strategist Luke Gromen points out – the US needs to finance or refinance $5 trillion this year whereas global central banks bought a grand total of $24 billion of US government debt during Q1 2018. A few words spring to mind. ‘Mismatch’ is one of them. ’35 years’ worth of mean reversion in interest rates’ are some more. Former Fed chair Janet Yellen famously opined last June that there wouldn’t be another financial crisis in her lifetime. The worst job in the world today, probably, is being the new Fed chair. Being Janet Yellen’s doctor surely runs a pretty close second.

Written By
Tim Price
More from Tim Price
“When, more than 100 years ago, George Gilbert Williams, president of the...
Read More