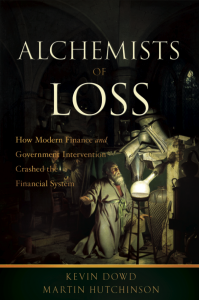 We are delighted to announce a forthcoming book by Cobden Centre Senior Fellow Professor Kevin Dowd and US-based journalist and former investment banker Martin Hutchinson: The Alchemists of Loss: How Modern Finance and Government Intervention Crashed the Financial System. The book contains some delightfully simple insights into a complex subject. For example:

The credit default swap sneaked up on everybody, becoming a $62 trillion market, without anyone outside the business knowing much about it. As the Bear Stearns, Lehman and AIG debacles revealed, these instruments also involved highly non-transparent credit risks of their own. As a holder of a CDS you don’t know whether your counterparty has issued only a few of your CDS, in which case you’ll probably get paid in a bankruptcy, or whether he has issued fifty times the outstanding debt you’re trying to hedge, in which case you’re unlikely to get paid.

Financial engineering’s benefit to the global economy is highly questionable and the proliferation of financially-engineered products of recent years has brought few benefits and led to huge losses for society at large. As we have seen, one quarter’s bad losses in late 2008 wiped out all the accumulated financial engineering profits of the last quarter century and saddled taxpayers with a bill for hundreds of billions, if not more.

Prof. Dowd has kindly agreed to pre-release two chapters through The Cobden Centre:

Alert readers will have already picked up some of the advice we would give investors and clients of financial institutions:

Besides this motherhood and apple pie stuff, investors should also be careful of correlation-based investment and risk management strategies, which work well when not needed but are apt to break down when they are. This is not to suggest that they should give up on diversification. People understood diversification long before Modern Portfolio Theory, but they tended to practice it differently and more wisely. Diversification was assessed by committees of experienced practitioners, who took a long-term view and relied on their judgment rather than unreliable correlation estimates – a far cry from modern practices of modern fund management, with its obsession with short-term performance assessment

Investors should demand transparency. Perhaps the most sobering lesson we have learned since the subprime crisis broke is the benefit of transparency in business dealings. Time after time, when a fiasco has occurred, a key contributing factors has lack of transparency. Subprime mortgages, CDOs and credit default swaps were all financial innovations that relied crucially on nobody asking too many questions. So too with the vast Madoff Ponzi scheme, involving some of the most sophisticated investors in the world,  which rested on the same fatal human omission.

The restoration of a rational and stable financial system inevitably requires major reform on a number of fronts. History gives much guidance here and also a role model: the period we should seek to emulate is the nineteenth century. Then money was sound, the dominant currency of the time, the pound, was literally as good as gold, while financial institutions were conservative and generally stable, and an altogether healthier financial ethos reigned.

It is very common these days to sneer at the gold standard: after all, it was Keynes who once dismissed it as “a relic from a barbarous age”. We would suggest, on the contrary, that a gold standard or some suitably 21st Century commodity equivalent would be highly desirable, and put an end to the disastrous century-long experiment with fiat money and its attendant miseries of inflation and monetary instability. The fact that Keynes opposed the gold standard is a further reason to support it.

As for the banking system, we would suggest that the role model is Scotland pre-1845, when the Scottish banking system was virtually free of state control, unhindered by a central bank, and equally admired and envied across the world – and copied by countries such as Canada and Australia. In all three countries, free banking systems operated highly successful for very long periods of time. Indeed, the Canadian system was widely admired in the United States – and many US reformers in the late nineteenth century saw it as their ideal. The Canadian system was highly stable – apart from the failures of two small Alberta banks in 1985, its last notable bank failure was that of the Home Bank of Canada back in 1923. There were no Canadian bank failures in the 1930s and, even after the establishment of the Bank of Canada in 1934, many still regard the Canadian banking system as the best in the world.

Our first choice environment would be one with a commodity standard, free banking (no central bank) and financial laissez-faire, restrictions on the use of the “limited liability” corporate form and the most limited government. Even if we don’t return all the way to these early nineteenth century standards (and we can imagine the opposition!), we should still move as much as possible in that direction, though we would not advocate the reintroduction of the notorious debtors’ prisons immortalized in the fiction of Charles Dickens! However, our proposed reforms herein are adapted to the “second best world” (if it’s actually that; it may be about thousandth best of all the ‘parallel universe’ possibilities) in which we live, with relatively large government, a fiat currency and a central bank.

The most important institutional policy that must be solved is that of an excessively expansionary monetary policy. Simply making the monetary authority “independent” does not achieve this if the monetary authority retains its interactions with politicians and the financial community, both of which want loose money. The ideal to aim at is a hard money Fed, a Paul Volcker Fed.

You can also pre-order Alchemists of Loss at Amazon.