“Sir, Your editorial “A Nobel award for work of true economic value” (October 15) cites the witty and memorable line of J M Keynes about wishing that economists could be “humble, competent people, on a level with dentists”, which concludes his provocative 1930 essay on the economic future. You fail to convey, however, the irony and condescension of the original text of the arrogant, intellectual elitist Keynes, who, while superlatively competent, was assuredly not humble. With the passage of 84 years, the irony has changed directions, for modern dentistry is based on real science, and has made huge advances in scientific knowledge, applied technology and practice, to the great benefit of mankind. It is obviously far ahead of economics in these respects, and it is indeed unlikely that economics will ever be able to rise to the level of dentistry.”

Changing people’s minds, apparently, has very little to do with winning the argument. Since people tend to make decisions emotionally, ‘evidence’ is a secondary issue. We are attempting to argue that the policy of QE, quantitative easing, is not just pointless but expensively pointless. Apparently, instead of using cold logic, we will have to reframe our argument as follows:

In terms of argumentative opponents, they don’t come much bigger than the former Fed chairman himself, Ben Bernanke. And it was Bernanke himself who rather pompously declared, shortly before leaving the Fed this year, that

“The problem with QE is it works in practice, but it doesn’t work in theory.”

There is, of course, no counter-factual. We will never know what might have happened if, say, the world’s central banks had elected not to throw trillions of dollars at the world’s largest banks and instead let the free market work its magic on an overleveraged financial system. But to suggest credibly that QE has worked, we first have to agree on a definition of what “work” means, and on what problem QE was meant to solve. If the objective of QE was to drive down longer term interest rates, given that short term rates were already at zero, then we would have to concede that in this somewhat narrow context, QE has “worked”. But we doubt whether that objective was front and centre for those people – we could variously call them “savers”, “investors”, “the unemployed” or “honest workers” – who are doubtless wondering when the economy will emerge from its current state of depression. As James Grant recently observed in the FT (“Low rates are jamming the economy’s vital signals”), it’s quite remarkable how, thus far, savers in particular have largely suffered in silence.

So yes, QE has “succeeded” in driving down interest rates. But we should probably reframe the problem. The problem isn’t that interest rates were or are too high. Quite the reverse: interest rates are clearly already too low – at least for savers, and for that matter investors in the euro zone and elsewhere. All the way out to 3 year maturities, investors in German government bonds, for example, are now faced with negative interest rates, and still they’re buying. This isn’t monetary policy success; this is madness. We think the QE debate should be reframed: has QE done anything to reform an economic and monetary system urgently in need of restructuring ? We think the answer, self-evidently, is “No”. The answer is also “No” to the question: “Can you solve a crisis of too much indebtedness by a) adding more debt to the pile and simultaneously b) suppressing interest rates ?” The toxic combination of more credit creation and global financial repression will merely make the ultimate Minsky moment that much more spectacular.

What accentuates the problem is market noise. @Robustcap fairly points out that there are (at least) four groups at play in the markets – and that at least three of them aren’t adding to the sum of human wisdom:

Group 1 comprises newsletter writers, and other dogmatic “End of the world newsletter salesmen” using every outlet to say “I told you so…” (even though some of them have been saying so for the last 1000 S&P handles..).

Group 2 comprises Perma-Bulls and other Wall Street product salesmen, offering “This is a buying opportunity” and other standard from-the-hip statements whenever the Vix index reaches 30 and the market trades 10% off from its high, at any time.

Group 4, however, comprises “True investors and traders” asking questions such as, “Is this a good price ?”; “Is this a good level ?”; “What is my risk stepping in here, on either side ?”; “Am I getting better value than I am paying for ?”; “What is the downside / upside ?” etc.

“With the “magnification” of noise by social media and the internet in general, one must shut off the first three groups and try to engage, find, follow, communicate with the fourth group only, those looking at FACTS, none dogmatic, understand value, risk, technicals and fundamentals and most importantly those who have no agenda and nothing to sell.”

To Jim Rickards, simply printing money and gifting it to the banks through the somewhat magical money creation process of QE is like treating cancer with aspirin: the supposed “solution” does nothing to address the root cause of the problem. The West is trapped in a secular depression and “normal” cyclical solutions, such as monetary policy measures, are not just inappropriate, but damnably expensive for the rest of us. Only widespread economic restructuring will do. And that involves hard decisions on the part of politicians. Thus far, politicians have shown themselves predictably not up to the task. Or in the words of Jean-Claude Juncker,

“We all know what to do; we just don’t know how to get re-elected after we’ve done it.”

And let’s not forget that other notable Junckerism,

“When it becomes serious, you have to lie.”

No cheers for democracy, then.

So, back to the debate:

This is where we start to view the world, once again, through the prism of investments – not least since we’re not policy makers. For those wondering why a) markets have become that much more volatile recently (and not just stocks – see the recent wild trading in the US 10 year government bond) and b) inflation (other than in financial asset prices) seems weirdly quiescent – the answer has been best expressed by both Jim Rickards and by the good folk at Incrementum. The pertinent metaphor is that of the tug of war. The image below (source: Incrementum) states the case. 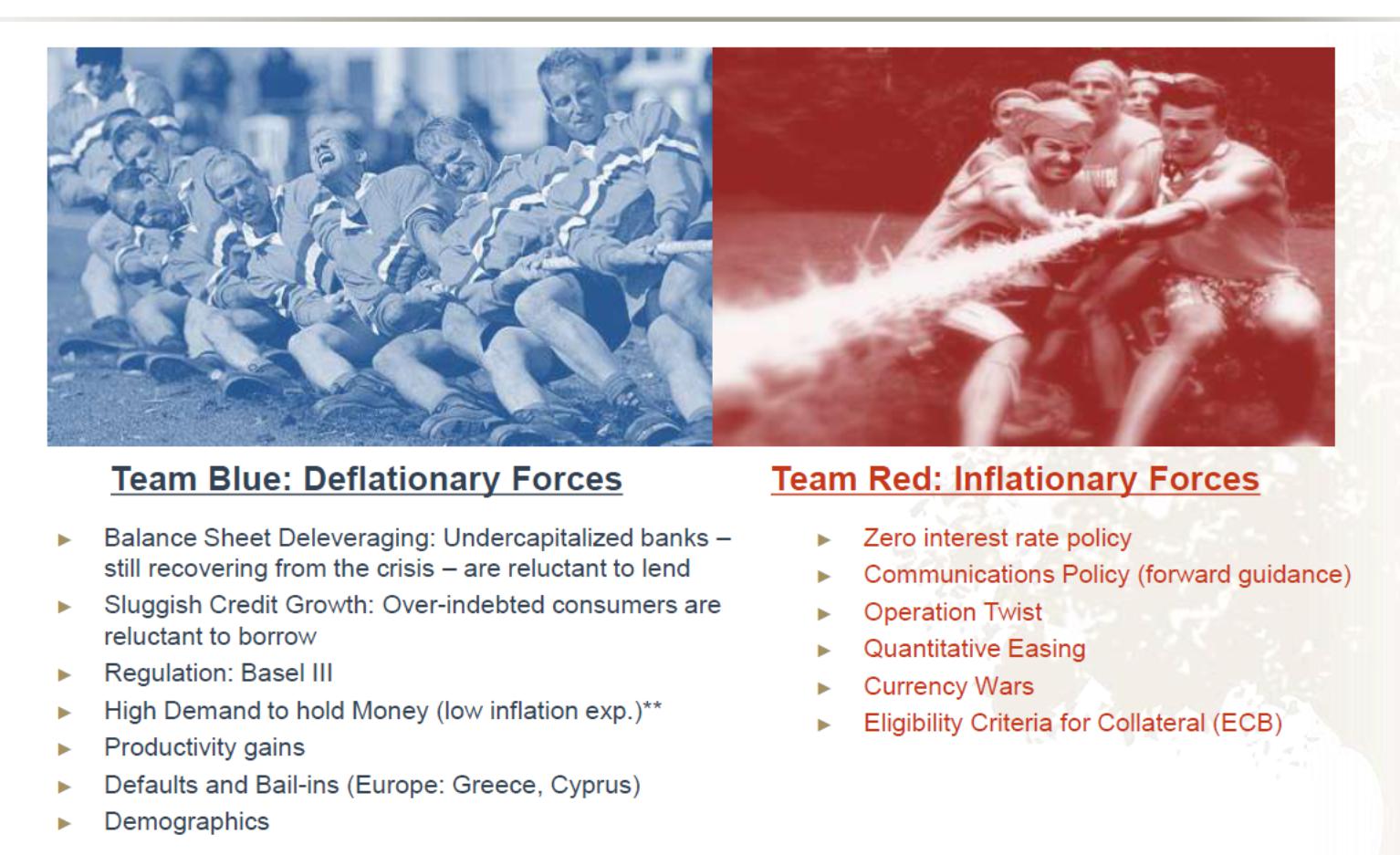 The blue team represents the markets. The markets want deflation, and they want the world’s unsustainable debt pile to be reduced. There are three ways to reduce the debt pile. One is to engineer sufficient economic growth (no longer feasible, in our view) to service the debt. The second is to default (which, in a debt-based monetary system, amounts to Armageddon). The third brings us over to the red team: explicit, state-sanctioned inflationism, and financial repression. The reason why markets have become so volatile is that from day to day, the blue and red teams of deflationary and inflationary forces are duking it out, and neither side has yet been convincingly victorious. Who ultimately wins ? We think we know the answer, but the outcome will likely be a function of politics as much as investment forces (“markets”). While we wait for the outcome, we believe the most prudent and pragmatic course of action is to seek shelter in the least overpriced corners of the market. For us, that means explicit, compelling value and deep value equity. Nothing else, and certainly nothing by way of traditional government or corporate debt investments, or any form of equity or bond market index-tracking, makes any sense at all.