In these times of Robert Zoellick, the president of the World Bank, calling for a return to the gold standard, it becomes necessary for us to examine whether we can trust a nascent world government to provide us with sound money alongside an honest financial system. That is why it is essential that we educate ourselves about the former private production of money and how it was gradually taken over by the modern indenturing state. 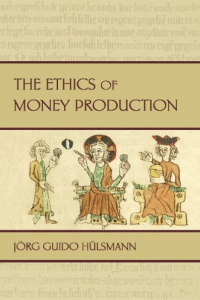 There are many great books to help us achieve this knowledge, including the heavyweight epics of Human Action, Money, Bank Credit, and Economic Cycles, and ‘The Daddy’, which is The Theory of Money and Credit.

However, as a man who always runs away from books thicker than his thumb, after a bad experience with Das Kapital, I think there are two much more accessible books which stand out to prepare us for the earlier hard yards of the heavyweight monsters above. These are What Has The Government Done To Our Money? and The Mystery of Banking, both by Murray N. Rothbard.

Both of these books leap straight into the vigorous action of the fight, which is like getting a front-row seat at a heavyweight world championship boxing match, but without necessarily observing all of the training which was required beforehand, prior to the fight taking place in Madison Square Gardens. An essential book to plug this observational gap is The Ethics of Money Production, by Jörg Guido Hülsmann, which is freely available as a PDF at the Ludwig von Mises Institute.

The book is divided into three beautifully-written main parts:

These three parts cover everything you might think of, from the invention of metallic money all the way through to the end of Bretton-Woods and then the later creation of the Euro.  However, the heart of the book is a sequence of four chapters — in the second part of the book on Inflation — with two of these chapter titles, alas, unfortunately insisting on the use of American spellings and the appalling employment of the letter ‘zed’; the chapter content, however, is still very good, even if has fallen under the unwelcome control of an American spell-checker:

When you are the elite organisation calling yourself ‘The State’, you have a monopoly on law in a particular territory; it is with this power that you can subvert and distort the natural order of private property, thus leading to the impoverishment and helotry of everyone else within that territory, under your rule, even leading to the ridiculous notion that any debt this elite runs up — to maintain their position of privilege — is somehow ‘owed’ by the subjugated population, despite no-one ever asking their opinion about whether this debt should have been taken on by the elite and despite all the benefits of the spending of that debt going directly into the grasping hands of that same privileged elite.

The whole problem with money is the state’s imposition of legal privileges for bankers, given to bankers in return for the promise that they will always soak up the debts of politicians, to enable politicians to enslave their populations over time in a Procrustean bed of warfare and welfare, to the ultimate benefit of the politicians and their friends, and to the detriment of everyone else.

These chapters make clear how that mechanism of monetary enslavement operates, and therefore how we can break that mechanism and become free again from the appalling bondage of government bonds. It is with the removal of these legal privileges and a restoration of the natural order of private property rights that we will be able to put the wheels back on the cart, get moving again, and put the politicians back in their place, which is the lowest sewage gutter of human defilement amongst all of the other selfish short-sighted rats.

We should put absolutely no faith in Robert Zoellick and his political friends, who wish to wrap us in longer chains of thralldom, via the Bancor. All we need do is to strip away these statist legal privileges, as described by Professor Hülsmann, and then let the free market take care of the rest.

His book therefore shows us how to fix money. And best of all, it requires no money to find out how. And for a cheapskate like me, impoverished by years of government taxes and bond interest repayments to enable politicians to live the life of Riley in London, that news is sweetest nectar and purest ambrosia.

God bless him and everyone else at LvMI, including all of their sponsors, for making this possible.

You can find the full contents of the book, here.

Here is a video of Professor Hülsmann speaking about his book:

Written By
Andy Duncan
More from Andy Duncan
With the success of the Quantitative Easing Explained video from XtraNormal, an...
Read More

2 replies on “Book Review: ‘The Ethics of Money Production’ by Jörg Guido Hülsmann”