– Comment by Steven Ricchiuto of Mizuho Securities in response to the Federal Reserve’s surprise decision to refrain from “tapering” its $85 billion monthly bond purchase programme, as reported by the Financial Times, 19 September.

Human beings are suckers for a story. The story peddled by mainstream economic commentators goes that the US Federal Reserve and its international cousins have acted boldly to prevent a second Great Depression by stepping in to support the banks (and not coincidentally the government bond markets) by printing trillions of dollars of ex nihilo money which, through the mechanism of quantitative easing, will mysteriously reflate the economy. It’s a story alright, but more akin to a fairy story. We favour an alternative narrative, namely that with politicians abdicating all real responsibility in addressing the financial and economic crisis (see this article), the heavy lifting has been left to central bankers, who have run out of conventional policy options and are now stoking the fire for the next financial crisis by attempting to rig prices throughout the financial system, notably in property markets, but having a grave impact on volatility across credit markets, government bond markets, equities, commodities.. As politicians might have told either them, or Steven Ricchiuto of Mizuho Securities, it’s quite easy to be brave when you’re spending other people’s money.

Before we get back to the Fed, it’s worth a minute recapping why it was created, namely as a private banking cartel with a monopoly over the country’s financial resources and the facility to shift losses when they occur to the taxpayers. Satire goes a long way here (not least because the reality is so depressing) – here is Punch’s take on the banks from April 1957*:

Q: What are banks for?

A: To make money.

Q: For the customers?

A: For the banks.

A: It wouldn’t be in good taste. But it is mentioned by implication in references to reserves of $249,000,000 or thereabouts. That is the money they have made.

Q: Out of the customers?

Q: I see. And they keep it in a safe somewhere?

A: Not at all. They lend it to customers.

Q: Then they haven’t got it?

Q: Then how is it Assets?

A: They maintain that it would be if they got it back.

Q: But they must have some money in a safe somewhere?

Q: But if they’ve got it, how can they be liable for it?

A: Because it isn’t theirs.

Q: Then why do they have it?

A: It has been lent to them by customers.

A: In effect. They put money into their accounts, so it is really lent to the banks.

Q: And what do the banks do with it?

A: Lend it to other customers.

Q: But you said that money they lent to other people was Assets?

Q: Then Assets and Liabilities must be the same thing.

A: You can’t really say that.

Q: Then it cancels out. It means, doesn’t it, that banks don’t really have any money at all?

Q: Never mind theoretically. And if they haven’t any money, where do they get their Reserves of $249,000,000 or thereabouts?

A: I told you. That is the money they’ve made.

A: Well, when they lend your $100 to someone they charge him interest.

A: It depends on the Bank rate. Say five and a half percent. That’s their profit.

A: It’s the theory of banking practice that..

A: It depends on the Bank rate. Say half a percent.

Q: Grasping of me, rather?

A: But that’s only if you’re not going to draw the money out again.

A: They wouldn’t like you to draw it out again.

Q: Why not? If I keep it there you say it’s a Liability. Wouldn’t they be glad if I reduced their Liabilities by removing it?

A: No. Because if you remove it they can’t lend it to anyone else.

Q: But if I wanted to remove it they’d have to let me?

Q: But suppose they’ve already lent it to another customer?

A: Then they’ll let you have someone else’s money.

Q: But suppose he wants his too.. and they’ve let me have it?

A: You’re being purposely obtuse.

Q: I think I’m being acute. What if everyone wanted their money at once?

A: It’s the theory of banking practice that they never would.

Q: So what banks bank on is not having to meet their commitments?

Q: Naturally. Well, if there’s nothing else you think you can tell me..

A: Quite so. Now you can go off and open a banking account.

Q: Wouldn’t I do better to go off and open up a bank?

*Cited in G. Edward Griffin’s history of the Fed, ‘The Creature From Jekyll Island’.

If only. In defending an insolvent banking system, central banks have now created a more absurd situation than Punch could ever have dreamed of. This commentator, for example, has a meaningful cash deposit with a UK commercial bank that is currently earning 0.0% interest (let’s say minus 3% in real terms). To put it another way, we have 100% counterparty and credit risk with a minus 3% annual return. Is it any wonder the UK savings rate is not higher ? Is it any wonder that savers are stampeding into risk assets ? But the likes of the Fed have muddied the pond further by attempting a policy of “forward guidance” that is little more than a sick joke, given the recent sell-off in government bond markets and the resultant rise in government bond yields, on fears of “tapering”. The Fed has lost control of the bond market. As Swiss investor Marc Faber puts it,

The question is when will it lose control of the stock market.

For several years we have been warning of the dangers of central banks becoming increasingly interventionist in the capital markets. We are old school free market libertarians: if bankers make bad decisions, let their banks fail. This is essentially the same perspective taken by Michael Lewis, recently interviewed in Bloomberg Businessweek. On the fifth anniversary of its bankruptcy, Lewis was asked whether he thought Lehman Brothers had been unfairly singled out when it was allowed to fail (given that every other investment bank was quickly rescued, courtesy of the US taxpayer). His response:

Lehman Brothers was the only one that experienced justice. They should’ve all been left to the mercy of the marketplace. I don’t feel, oh, how sad that Lehman went down. I feel, how sad that Goldman Sachs and Morgan Stanley didn’t follow. I would’ve liked to have seen the crisis play itself out more. The problem is, we would’ve all paid the price. It’s a close call, but I think the long-term effects would’ve been better.

But that is not what happened. We didn’t get runs on investment banks. We got bank bailouts, taxpayer rescues, QE1, QE2, QE3 and now QE-Infinity. The impact on the real economy has been questionable, to say the least: 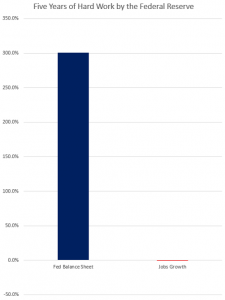 But the impact on financial markets has been demonstrably beneficial to investment banks and their largest clients.

As Stanley Druckenmiller points out, the Fed didn’t act bravely, they bottled it. They had the opportunity to start, ever so gently, to reverse a policy of monstrous intervention in the capital markets, and they blew it. That makes it all the harder for them to “taper” next time round. When do capital markets free themselves from the baleful manipulation of the state? Marc Faber was similarly unimpressed:

The endgame is a total collapse, but from a higher diving board. The Fed will continue to print and if the stock market goes down 10% they will print even more. And they don’t know anything else to do. And quite frankly, they have boxed themselves into a corner where they are now kind of desperate.

The Fed may be desperate, but we’re not. We have our client assets carefully corralled into four separate asset classes. High quality debt (not US Treasuries or UK Gilts) offers income and a degree of capital protection given that the central banks have demolished deposit rates. Defensive equities give us some skin in the game given central bank bubble-blowing in the stock market – but this game ends in tears. Uncorrelated, systematic trend-followers give us a “market neutral” way of prospectively benefiting from any disorderly market panic. And real assets give us some major skin in the game in the event of an inflationary disaster. Since pretty much all of these assets can be marked to market on a daily basis, they are not free of volatility, but we are more concerned with avoiding the risk of permanent loss of capital, Cypriot bank-style. We have, in other words, Fed-proofed our portfolios to the best of our ability. And on the topic of gold alone, Marc Faber again:

I always buy gold and I own gold. I don’t even value it. I regard it as an insurance policy. I think responsible citizens should own gold, period.

Now that the Fed has blinked in the face of market resistance, it seems inevitable to us, as it does to people like Marc Faber, that at some point, possibly in the near future, traditional assets are at risk of loudly going bang. How close are you going to be to the explosion?

This article demonstrates that only government borrowing in the US and UK drives GDP growth. This surprising conclusion is confirmed by long-run statistics. GDP…