On Wednesday last the Fed surprised most people by deciding not to taper. What is not generally appreciated is that once a central bank starts to use monetary expansion as a cure-all it is extremely difficult for it to stop. This is the basic reason the Fed has not pursued the idea, and why it most probably never will.

That is a strong statement. But consider this: Paul Volcker faced this same dilemma in 1979, when he was appointed Chairman of the Fed. In raising interest rates to choke off inflation he had two things going for him that his successor has not: rising inflation was already over 10% so was an obvious priority, and importantly private sector debt-to-GDP was at a far lower level than today. It was a tough decision at the time to nearly double interest rates. Today, with official inflation low and private sector indebtedness high it would be extremely difficult.

Until official inflation picks up, it is far more comforting to pretend it won’t be an issue, which reasonably describes the Fed’s approach. Instead it is targeting unemployment rates, on the basis that price inflation is tied to capacity utilisation, which in turn is tied to employment.

One thing is certain in life, besides death and taxes, and that is if you expand the quantity of money prices eventually rise; or more accurately the purchasing power of debased money falls. The problem is how to measure currency debasement, and this has been a topic of heated debate since fiat currencies first developed. This has led me to propose a new measure of money, which at James Turk’s suggestion I am calling the Fiat Money Quantity (FMQ). The purpose is to gives us a measure of fiat money that enables us to assess the danger of currency hyperinflation. I shall be publishing a paper on this shortly explaining the methodology.

The principle behind it is to signal deviations from the long-term trend of currency growth to alert us to both monetary crises and excessive inflation. The approach is to unwind the historic progression from full gold convertibility to the current state of no convertibility. Our gold was first deposited with our banks, and then from there with the central bank. In return for our gold deposits we have been issued cash notes and coin and credits in the form of deposits at the bank, and our bank equally has deposits at the central bank.

The FMQ is therefore comprised of the sum of cash and coin, plus all accessible deposits, plus our bank’s deposits held at the central bank. This for the US dollar is illustrated in the chart below. 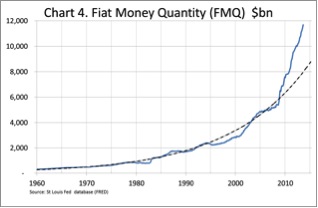 The dotted line is the long-term exponential trend rate, and it is immediately obvious that the FMQ is now hyper-inflating. It currently requires a $3.6 trillion contraction of deposits to return this measure of currency quantity back to trend.

This accurately sums up the problem facing the Fed. We must understand they are in an almost impossible position that dates back to their monetary response to the banking crisis. Not even Paul Volcker could have got us out of this one. Once the addiction to weak money hits this pace there is no solution without threatening to bring down the whole system.