Sweden, that Democratic Socialist paradise that is the role model of all progressives, is compared to the UK, whose state sector is the same size and whose over-extended housing sector is similar. 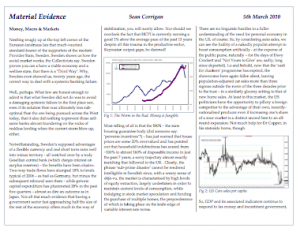 Corrigan points out how in the USA the “cash for clunkers” scheme has had the only effect of bringing consumption forward. Something we all knew would happen when this half-brained scheme was launched both in the USA and in the UK post Lehman. When policy makers will ever learn, I do not know.

World trade is back to where it was three years ago, most of it being driven by the next giant credit bubble boiling to burst: China.

“Donald Trump looks like the villain in a movie where the hero is a dog.” – The internet. Which four letter word still has…