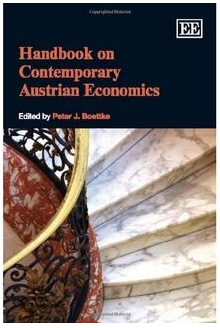 I’m delighted to have received a hard copy of the “Handbook on Contemporary Austrian Economics“. Here’s the blurb:

This Handbook looks through the lens of the latest generation of scholars at the main propositions believed by so-called ‘Austrians’. Each contributing author addresses key tenets of the school of thought, and outlines its ongoing contribution to economics and to the social sciences.

I contributed the opening chapter, titled “Only Individuals Choose”.

When I first decided I wanted to pursue an academic career as an Austrian School economist, I had in mind writing this type of book. I think there is a a gap in the market for a series of relatively short articles that set the main propositions of the Austrian school within the contemporary economics and social science debate. In addition, the book demonstrates the productivty of the GMU econ program and Pete Boettke in particular. This book isn’t so much edited by him, but inspired by and made possible because of him. It could be used as a text book, or as an introductory guide. It is written for academics and laymen alike. It’s not cheap, but should become a cornerstone text of the second revival in Austrian economics.

The most important thing about this book is that it is written by people who for the most part weren’t born during the first revival (1974). It is not an attempted resuscitation nor a history of thought. It sets out the main propositions of the *current* research agenda of the Austrian school, demonstrates and cites examples of *contemporary* work, and reflects a generation of scholars that are receiving widespread *mainstream* credibility. If Lin Ostrom winning the Nobel Prize enticed some Austrians to come out of the closet and lose a few inhibitions, so should this!

Indeed my recent talk on “Contemporary work Austrian Economics” intended to present a similar rallying cry. This is the seminal introduction to how Austrian economics is contributing to the top table of academic debate.