Is the bond market finally catching on to the “forced risk” trade…?

AS NIALL FERGUSON never tires of reminding us, bond markets rarely react early to bad news, no matter how plain it looks to everyone else.

“In the years leading up to the First World War,” as the Harvard historian explained in 2006, for instance, “the London bond market – then the biggest in the world – appears to have become markedly less sensitive to international crises than it had been in the nineteenth century.” So despite much gnashing of teeth over the Russian/German/Yellow/Turkish threat to empire in the ever-xenophobic British press, the catastrophe of August 1914 still caught bond holders napping (holidaying in fact), oblivious to their imminent risk and the decades of negative real returns that lay ahead.

Similarly, in the 1970s, real yields – after accounting for inflation – consistently paid less than nothing, yet the bond-market sell-off only really began after nearly a decade of sub-zero returns. Bond holders again needed a lot of telling, in short. Which makes this month’s new Investment Outlook from Bill Gross – head of the world’s largest bond-fund manager, Pimco – signal.

“Central bankers have lowered the cost of money for 30 years now,” writes Gross, finally catching up with what us nutty gold bugs have long pointed out, “legitimately following global disinflationary forces downward, but also validating increased leverage [in the financial sector] via lower real interest rates.”

Today’s Fed promise of “low or negative real interest rate for an ‘extended period of time’ is the most devilish of all policy tools,” Gross goes on. Because “to rebalance debt loads and re-equitize financial institutions that should have known better, central banks and policymakers are taking money from one class of asset holders [savers and retirees] and giving it to another [bank bosses and the other finance croupiers].” 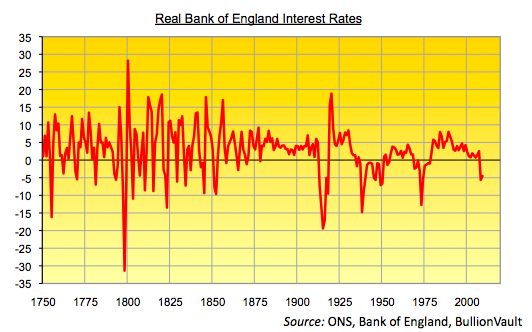 Absent the apparent noise of the first 125 years above, however – when real rates, denominated and paid in gold bullion of course, in fact averaged 3.8% per year – the last 140-odd years first rewarded cash savers, then whipped them wildly as the First World War  struck, and then denied them a balancing positive return to make up for their previous losses, right up until the start of the 1980s.

Paying the strongest real rates since the Great Depression, but without any hope of gold bullion to back its currency, the Bank of England – like the US Fed and German Bundesbank – finally got the inflation Gremlin back in the blender. Peace, general prosperity, and the “long boom” of ever-rising equity and bond prices ensued. Right up until those slowly declining real rates brought about a global financial bubble which demanded (or so policymakers believe) sub-zero real rates to fix its collapse.

What comes next? Bill Gross advises bond buyers to seek out positive real returns outside major-economy government bonds, basically recommending the “forced risk” trade which Japanese savers have long had to embrace. Other observers, fearing emerging-market volatility or default, might also want to consider hard assets. Because – and lacking all hard-money backing for currency – the common denominator between the last 10 years of rising gold prices and the inflationary 1970s remains miserable returns from other asset classes, most notably the negative real rate of interest paid to bank savings.

Here in the UK, for example, last month’s VAT tax increase, together with the zero returns still being offered to cash savers, have most likely taken the real return on bank deposits to new 30-year lows. The last time cash savings were losing value at this pace – worse than 4 pence in the Pound annualised – inflation stood at record peace-time levels, threatening to crush the economy. But the net effect today is just the same for retained wealth. With money under constant attack thanks to growth-at-any-cost policy, gold and silver are becoming increasingly attractive alternatives.

And for all the chatter about raising interest rates, seven of the nine policy-makers at January’s Bank of England meeting voted against hiking the base rate by even just 0.25%. Chief “hawk” Andrew Sentance will leave the committee in May, and with annual interest costs on the government’s debt set to double to £63 billion between 2010 and 2014 – and with a further £154bn of outstanding debt due for repayment by then as well – the political imperative for rates to stay low is clear, present and overwhelming. At the start of the ’80s, gross national debt was a fraction of today’s burden.

Bank depositors, in short, look set to continue paying for both the banking bail-out and the gently declining real rates of the last 3 decades which required it. Little wonder a growing number are opting out of official currency and national debt entirely, choosing industrial commodities and precious metals instead.

Written By
Adrian Ash
More from Adrian Ash
So a Dollar was still a Dollar, as Richard Nixon told US...
Read More

2 replies on “A Moment of Clarity”