Even though the Chinese authorities made no bones about the fact that they had conveniently ‘rebased’ their latest CPI numbers in order to mitigate the rather inconvenient influence thereupon of surging food prices, so eager was the market to hew to its chosen course of Onward and Upward, that this naked manipulation was gratefully taken at full face value, all around the speculative globe.

Perhaps more germane to the preservation of the Herd’s blithe psychology, however, was the additional information that Chinese money supply seems to have decelerated alarmingly to reach its slowest real (and nominal) pace since the great, post LEH‐AIG adrenaline shot was injected directly into the heart of the economy in early 2009.

Moreover, there are numerous reports in the press that the successive increases in bank reserve ratio requirements are starting to bite and that pressure is also being felt in maintaining the prudentially‐mandated loan‐deposit ratios in a system where banks are precluded from competing for deposits by adjusting interest rates and where their customers are becoming tired of seeing the real value of their savings continually eroded.

If this is indeed the case—and, as ever with China, it is foolish to be too categorical about what does or does not make it into the English version of its press—this could truly mark the beginning of the end of the reflationary asset cycle we have all been so happily riding, for much of these past two years.

Certainly, China, is not the whole world, but it has unchallengeably become what is perhaps the nexus of current economic evolution, as well as comprising the most important marginal consumer of many key inputs, whether we consider raw materials, capital goods, or components.

Take two‐way trade flows as an instance. From a base of around 15% of those passing across US borders in the 1990s, China’s ports now deal within excess of 70% of the value handled in the world’s biggest economy and the gap is closing so rapidly that—were the present trends to remain in place for just another 3‐4 years— China would take over the undisputed, global number one spot. Just in case one is tempted to dismiss this as more a tale of secular American decline than of Chinese resurgence, note that, in the same period and in regard to this same measure, China has moved from 50% of Japan to more than 200% and from ~30% of Germany to 140%.

Another little factoid which should give one pause is that, over the past six years, China’s cumulative $920 billion trade surplus with the consumer of first resort—the US— matches, almost dollar for dollar, China’s combined trade deficit with Japan, South Korea, and Taiwan combined, a correspondence reinforced by that fact that the relevant totals for each individual year lie in a range of parity +/‐15%.

For another indication of the key role being played by China and those within its economic ambit, take the case of Germany. Between 2000 and 2010, this, the world’s other great export powerhouse, did almost no new business with the US, its growth being predicated upon sales to (and purchases from) the rest of Europe (whether inside or outside the single currency area) with between a fifth (of incremental exports) and a quarter (imports) also being accounted for by Asia.

To show just how crucial this re‐orientation has been for the German rebound of the past two years, look also at the following plot showing the progression of business revenues through Boom and Bust, and take this in cognisance of VDMA comments about its members’ unprecedented present concentration of orders in Asia, in general, and China, in particular. 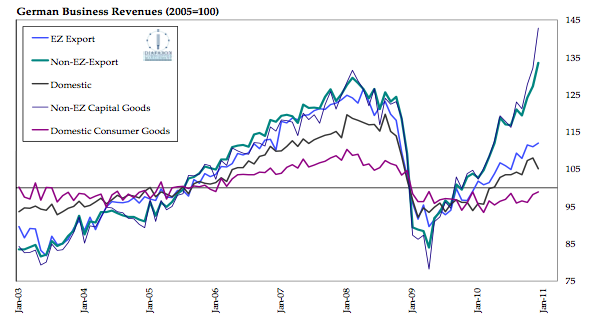 Thus, if China’s tightening does continue in earnest—and if it has the same effect as those already being felt in, say, India and Brazil ‐ then we can expect some pretty significant ramifications to ensue.

Written By
Sean Corrigan
More from Sean Corrigan
The fallacy [that the Bank cannot overissue money] lies in not distinguishing...
Read More