For such a pervasive term, ‘social justice’ is a notoriously tricky concept to quantify. Karl Marx’s notion of social justice was, famously, “From each according to his ability, to each according to his need”. That of the economists of the late nineteenth century was the Marginal Productivity Theory of Distribution. Friedrich Von Hayek claimed to have spent 10 years pondering the matter only to announce that he had “failed”, writing instead that the term was “an empty formula, conventionally used to assert that a particular claim is justified without giving any reason”.

Indeed, there are probably as many opinions on what constitutes social justice as there are individuals capable of holding one. The issue is also confused by the frivolous insertion of the word ‘social’, as though that gives it more weight. It is simply a matter of justice and, personally, I would regard it as unjust for a government or central monetary authority to expropriate the wealth of the poorest members of society via the debasement of their money. Yet, around the world, that is exactly what is happening.

Tuesday saw the announcement that inflation, at 4.5%, was outside of the mandated target range for the 17th month in a row. Despite this there were still people willing to describe the inflation as “temporary”, the same temporary inflation we’ve been hearing about for nearly a year and a half. And despite the fact that, as Michael Saunders of Citi warned, 80% of the items measured in the CPI are rising by more than 2% year on year reflecting a broadening of inflation Roger Bootle could still be found warning that deflation was the real danger.

New research shows that poorer households have experienced higher inflation on average than richer households over the past decade. This difference has been especially marked since 2008 (during the recession) when the poorest fifth of households faced an average annual inflation rate of 4.3% whilst the richest fifth experienced a rate of just 2.7% 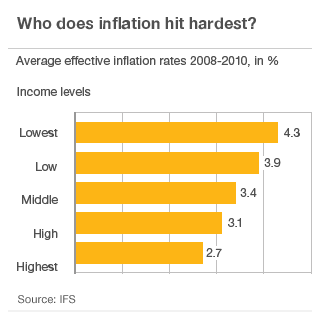 Neither is this confined to the UK. As reported recently, rising inflation in both China and India has been a driver of rising inequality in those countries. Loose central bank policy, in the UK, the USA and elsewhere, has been making the poor poorer.

This would come as no surprise to anyone sympathetic the Austrian view of the non-neutrality of money. When a credit expansion takes place, the newly created credit is initially passed to one set of economic agents who benefit from increased purchasing power. These people are likely to be well connected socially, politically or financially. But this new credit cannot conjure productive resources out of thin air and, eventually, all it does is bid up prices having distorted the capital structure along the way. By the time the new credit reaches the least socially, politically and financially connected people it has declined in purchasing power by an amount sufficient to reflect its new found abundance relative to goods and services in the economy. Only the initial recipients benefited from the credit expansion.

As the Guardian put it, the IFS report found that “Well-off households were also the main beneficiaries of the Bank of England’s decision to slash interest rates from 5.5% to 0.5% in 2008-09.” Or, as Ludwig Von Mises wrote,

Inflation and credit expansion, the preferred methods of present day government openhandedness, do not add anything to the amount of resources available. They make some people more prosperous, but only to the extent that they make others poorer

This is why ending inflationary monetary policies should not just be the preserve of the “cranks” and “gold bugs” of mainstream economic folklore. Inflation disproportionately harms the poorest in society. Sound money is, to borrow a phrase, an issue of ‘social’ justice.

John Phelan is a fellow of the Cobden Centre and works as an economist at Center of the American Experiment. He is a graduate of Birkbeck College, University of London, where he earned a BSc in Economics, and of the London School of Economics where he earned an MSc. He worked in finance for ten years before becoming a professional economist. He worked at Capital Economics in London, where he wrote reports ranging from the impact of Brexit on the British economy to the effect of government regulation on cell phone coverage. John has written for City A.M. in London and for The Wall Street Journal in both Europe and the U.S. He has also been published in the journal Economic Affairs.

This classic essay by Frédéric Bastiat was recently featured at Mises.org. It was first published in 1845, as the second chapter of Bastiat’s Economic…