Hazlitt referred to the great economist Benjamin M. Anderson in the same breath as Mises when saying that both of them had already penned essays that had dealt with the so called “refutation” of Say’s Law by Keynes. We part republish his “Digression on Keynes,” which appeared as Chapter 60 of Anderson’s Economics and the Public Welfare and Chapter 9 of Hazlitt’s The Critics of Keynesian Economics.

For me, this is a great essay as it does do what Hazlitt says and it adds the important dimension that the addition of bank credit is not a substitute for savings and that an excess of credit will cause the disturbing effects of putting production out of line with consumption (i.e. a recession).

What’s required is a realignment of prices to what consumers are prepared to pay for the goods offered. This is a warning to modern politicians: “credit easing” will just cause more goods to be created that are not wanted, prolonging the recession. 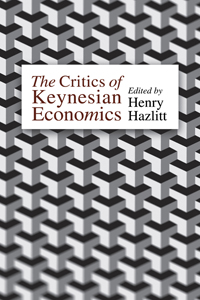 The central theoretical issue involved in the problem of postwar economic readjustment, and in the problem of full employment in the postwar period, is the issue between the equilibrium doctrine and the purchasing power doctrine.

The prevailing view among economists, on the other hand, has long been that purchasing power grows out of production. The great producing countries are the great consuming countries. The twentieth century world consumes vastly more than the eighteenth century world because it produces vastly more. Supply of wheat gives rise to demand for automobiles, silks, shoes, cotton goods, and other things that the wheat producer wants. Supply of shoes gives rise to demand for wheat, for silks, for automobiles and for other things that the shoe producer wants. Supply and demand in the aggregate are thus not merely equal, but they are identical, since every commodity may be looked upon either as supply of its own kind or as demand for other things. But this doctrine is subject to the great qualification that the proportions must be right; that there must be equilibrium.

On the equilibrium theory occasional periods of readjustment are inevitable and are useful. An active boom almost inevitably generates disequilibria. The story in the present volume of the boom of 1919-1920 and the crisis of 1920-1921 gives a classical illustration. The period of readjustment may be relatively short and need not be severe, but a period of shakedown, a period in which overexpanded industries are contracted and opportunities made for under-developed industries to expand, a period in which prices and costs come into equilibrium, a period in which weak spots in the credit situation are cleaned up, a period in which excessive debts are liquidated— such periods we must have from time to time. The effort to prevent adjustment and liquidation by the pouring out of artificial purchasing power is, from the standpoint of the equilibrium doctrine, an utterly futile and wasteful and dangerous performance. Once a re-equilibration is accomplished, moreover, the equilibrium doctrine would regard pouring out new artificial purchasing power as wholly unnecessary and further as dangerous, since it would tend to create new disequilibria. 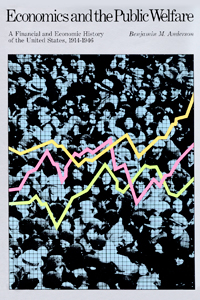 Keynes was a dangerously unsound thinker.[1] His influence in the Roosevelt Administration was very great. His influence upon most of the economists in the employ of the Government is incredibly great. There has arisen a volume of theoretical literature regarding Keynes almost equal to that which has arisen around Karl Marx. [2] His followers are satisfied that he has destroyed the long accepted economic doctrine that aggregate supply and aggregate demand grow together. It seems necessary to analyze Keynes’s argument with respect to this point.

Keynes Ignores the Essential Point in the Doctrine He Attacks. Keynes presents his argument in his The General Theory of Employment, Interest and Money, published in 1936. But he nowhere in the book takes account of the law of equilibrium among the industries, which has always been recognized as an essential part of the doctrine that supply creates its own demand. He takes as his target a seemingly crude statement from J. S. Mill’s Principles of Political Economy (Book III, chap. 14, par. 2) which follows:

What constitutes the means of payment for commodities is simply commodities. Each person’s means of paying for the productions of other people consist of those which he himself possesses. All sellers are inevitably, and by the meaning of the word, buyers. Could we suddenly double the productive powers of the country, we should double the supply of commodities in every market; but we should, by the same stroke, double the purchasing power. Everybody would bring a double demand as well as supply: everybody would be able to buy twice as much, because every one would have twice as much to offer in exchange.

Now this passage by itself does not present the essentials of the doctrine. If we doubled the productive power of the country, we should not double the supply of commodities in every market, and if we did, we should not clear the markets of the double supply in every market. If we doubled the supply in the salt market, for example, we should have an appalling glut of salt. The great increases would come in the items where demand is elastic. We should change very radically the proportions in which we produced commodities.

But it is unfair to Mill to take this brief passage out of its context and present it as if it represented the heart of the doctrine. If Keynes had quoted only the three sentences immediately following, he would have introduced us to the conception of balance and proportion and equilibrium which is the heart of the doctrine—a notion which Keynes nowhere considers in this book. Mill’s next few lines, immediately following the passage torn from its context, quoted above, are as follows:

It is probable, indeed, that there would now be a superfluity of certain things. Although the community would willingly double its aggregate consumption, it may already have as much as it desires of some commodities, and it may prefer to do more than double its consumption of others, or to exercise its increased purchasing power on some new thing. If so, the supply will adapt itself accordingly, and the values of things will continue to conform to their cost of production.

Keynes, furthermore, ignores entirely the rich, fine work done by such writers as J. B. Clark and the Austrian School, who elaborated the laws of proportionality and equilibrium.

The doctrine that supply creates its own demand, as presented by John Stuart Mill, assumes a proper equilibrium among the different kinds of production, assumes proper terms of exchange (i.e., price relationships) among different kinds of products, assumes proper relations between prices and costs. And the doctrine expects competition and free markets to be the instrumentality by means of which these proportions and price relations will be brought about. The modern version of the doctrine [3] would make explicit certain additional factors. There must be a proper balance in the international balance sheet. If foreign debts are excessive in relation to the volume of foreign trade, grave disorders can come. Moreover, the money and capital markets must be in a state of balance. When there is an excess of bank credit used as a substitute for savings, when bank credit goes in undue amounts into capital uses and speculative uses, impairing the liquidity of bank assets, or when the total volume of money and credit is expanded far beyond the growth of production and trade, disequilibria arise, and, above all, the quality of credit is impaired. Confidence may be suddenly shaken and a countermovement may set in.

With respect to all these points, automatic market forces tend to restore equilibrium in the absence of overwhelming governmental interference.

Keynes has nothing to say in his attack upon the doctrine that supply creates its own demand, in the volume referred to, with respect to these matters.

Indeed, far from considering the intricacies of the interrelations of markets, prices and different kinds of production, Keynes prefers to look at things in block. He says:

In dealing with the theory of employment I propose, therefore, to make use of only two fundamental units of quantity, namely, quantities of money-value and quantities of employment. The first of these is strictly homogeneous, and the second can be made so. For, in so far as different grades and kinds of labor and salaried assistance enjoy a more or less fixed relative remuneration, the quantity of employment can be sufficiently defined for our purpose by taking an hour’s employment of ordinary labor as our unit and weighing an hour’s employment of special labor in proportion to its remuneration; i.e., an hour of special labor remunerated at double ordinary rates will count as two units. [Italics mine.] [4] . . .

It is my belief that much unnecessary perplexity can be avoided if we limit ourselves strictly to the two units, money and labor, when we are dealing with the behavior of the economic system as a whole … [5]

[1] Lord Keynes was a man of genius. He had great abilities and great personal charm. [2] I have not read much of this elaborate literature. Keynes himself I have studied with care. I think it probable that other critics have anticipated many of the points I make here, and I would gladly give them credit if I knew. [3] See the Chase Economic Bulletin, Vol. XI, No. 3, June 12, 1931. [4] The General Theory of Employment, Interest and Money, p. 41. [5] Ibid.,p. 43 [6] See my criticism of the analogous procedure by Irving Fisher in his “Equation of Exchange,” in my Value of Money, New York, 1917 and 1936, pp. 158-162. [7] Ibid., p. 29.
Tags from the story
Benjamin M. Anderson, Henry Hazlitt, Jean Baptiste Say, Keynes, Keynesianism
Facebook Twitter Pinterest
LinkedIn Email