Last week saw the launch of the 2020 Tax Commission report on UK tax reform. It’s called “The single income tax” and can be downloaded from the website (PDF). 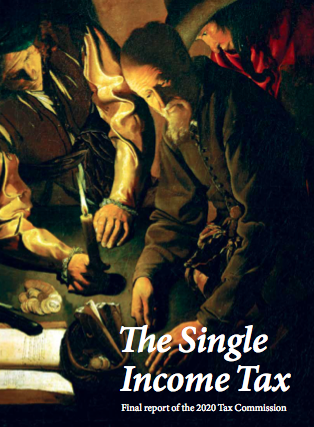 I was honoured to serve as a commissioner and learnt a great deal from the discussion  meetings. It was a long process and the result is something I’m very proud of.

I think there are three important things to say about the report. Firstly, it is thorough. At over 400 pages we wanted to survey the academic and policy literature to base the proposals in strong theory and rich evidence. Secondly, it is policy-focused. It attempts to find a balance between being genuinely radical (which it is) and politically feasible. Or, if not feasible, then relevant to debate. It is not intended to be utopian, but at the same time stays true to some basic principles of public finance. Thirdly, it directly confronts the moral and ethical dimension of taxes. It discusses the libertarian perspective and does not treat ethics as a no go area. Indeed it is one of the few tax studies I’ve seen that attempts to engage with different ideological positions.

Personally, I find it hard to truly advocate 30% tax rates. But this isn’t about what we’d like in theory. It’s about mapping out a direction of travel, shifting debate, and engaging with policymakers and the public. If you believe such aims are futile, then you may be disappointed. But if you want a well researched and implementable proposal for radical tax changes – this is it.

2 replies on “The single income tax”