Its philosophical underpinnings, however, were not solely a desire to get rich quick but, according to the FBI complaint published on Wednesday after the site was shut down, “Austrian economic theory” and the works of Ludwig von Mises and Murray Rothbard, economists closely associated with the Mises Institute, in the US state of Alabama.”

– More obnoxious anti-Austrian School slurs from the Financial Times, on this occasion by John Aglionby and Tracy Alloway.

The Daily Mail no longer has a monopoly on libelling the dead: the Financial Times is also doing a pretty good job. John Aglionby’s story this week (‘Libertarian economics underpinned Silk Road Bitcoin drug website’) was, even by the standards of a paper coloured pink that should really be coloured yellow, an extraordinary piece of character assassination. You do not have to be a believer in Austrian business cycle theory to find the linkage between an apparently criminal website and two widely respected economic theorists to be utterly objectionable. Those FT readers who were moved to respond on the paper’s website tended to think similarly:

“FT trying to discredit Ludwig von Mises, the Austrian business cycle theory and Bitcoins all in one go.. for god’s sake, you do not have any decency left..”

“childish, glib and misleading.. a new low for the FT.. Disgusting, to say the least”

“Another shining example of the death of journalism”

  “Sorry to say, but you all seem to fail to understand that the FT is making a heroic attempt to switch from factual financial reporting to a top position in entertainment of the masses. Don’t you think they are doing well? I most certainly do.”

That the Austrian business cycle theory should be held in such low esteem by such a prominent financial journal might be taken as an admission of guilt for not having noticed the credit bubble while it was inflating, and for then having continually defended the (neo-Keynesian) establishment line rather than debate the practical value of any alternative policy course.
In Austrian business cycle theory, the central bank is the culprit responsible for every boom and bust, firstly in fuelling excessive bank credit growth and maintaining interest rates at overly stimulative lows; then in prolonging the inevitable recession by propping up asset prices, bailing out insolvent banks, and attempting to stimulate the economy via the mechanism of deficit spending. It is difficult to see why the theory is so problematic given that the US Federal Reserve, for example, is not an agency of the US government per se but rather a private banking cartel. When push comes to shove, whose interests will the Fed ultimately protect – those of the banks, or those of the rest of the productive population?

But in any discussion of the ‘long emergency’ enduring throughout the insolvent West, the role of politicians should not be ignored. If politicians had moderated their tendencies to make unaffordable promises to their electorates, western fiscal disasters and the attendant debt mountains would now be less dramatic. And if politicians were not slaves to the electoral calendar, it is fair to assume that difficult choices might even have been taken in the long term interests of their respective economies.

The current gridlock in the US political system (first over the shutdown and latterly over the debt ceiling) is a perfect example of grandstanding politicians abdicating all responsibility for the electorate they claim to serve. And as a glaring example of cognitive dissonance, Treasury bond investors’ responses to fears over a looming default really do take some beating. That beating should, of course, be reserved for investors stupid enough to believe that debt issued by the world’s largest debtor country should be somehow treated as risk-free, especially when the possibility of formal default is only a matter of days away.

Treasury bond defenders will no doubt point out that in a fiat currency world where the central bank has the freedom to print ex nihilo money to its heart’s content, the very idea of default is absurd. But that is to confuse nominal returns with real ones. Yes, the Fed can expand its balance sheet indefinitely beyond the $3 trillion they have already conjured out of nowhere. The world need not fear a shortage of dollars. But in real terms, that’s precisely the point. The Fed can control the supply of dollars, but it cannot control their value on the foreign exchanges. The only reason that US QE hasn’t led to a dramatic erosion in the value of the dollar is that every other major economic bloc is up to the same tricks. This makes the rational analysis of international investments virtually impossible. It is also why we own gold – because it is a currency that cannot be printed by the Fed or anybody else.

On the topic of gold, the indefatigable Ronni Stoeferle of Incrementum in Liechtenstein has published his latest magisterial gold chartbook. (FT: if you’re reading, Ronni is an Austrian, so you’ll probably want to start the character assassinating now.) Set against the correction in the gold price 1974-1976, the current sell-off (September 2011 – ?) is nothing new. The question is really whether our financial (and in particular debt) circumstances today are better than they were in the 1970s. We would merely suggest that they are objectively worse. 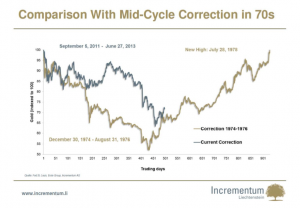 Trying to establish a fair price for gold is obviously difficult, but treating it as a commodity like any other suggests that the current sell-off is not markedly different from any previous correction during its bull run: 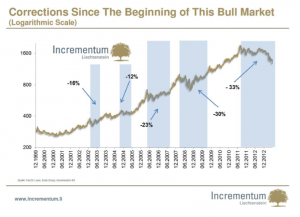 To cut to the chase, it makes sense to own gold because currencies are being printed to destruction; the long term downtrend in paper money (as expressed in terms of gold) remains absolutely intact: 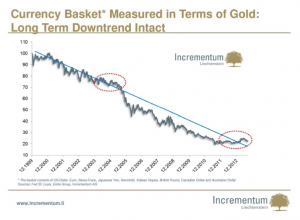 And we cannot discuss the merits of gold as money insurance over the medium term without acknowledging the scale of the problem in (US) government debt: 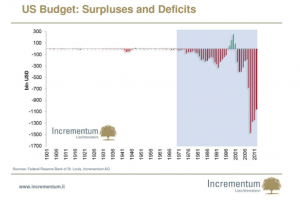 Whatever happens in the absurd and increasingly dangerous debate over raising the US debt ceiling, the fundamental problem remains throughout the western economic system. Governments have lived beyond their means for decades and must tighten their belts. Taxes are certain to rise, and welfare systems certain to contract. Even if western governments manage to rein in their morbidly obese consumption patterns without a disorderly market crisis, their legacy will be felt by generations yet to come. The debt mountain cannot and will not resolve itself. (Why, again, we own gold; because we think there is a non-trivial chance of a gigantic financial system reset.) The piper must, at some point, be paid. Western economic policy can be distilled down into just four words: the unborn cannot vote.

“Except for US Treasuries, what can you hold ? US Treasuries are the safe haven. For everyone, including China, it is the only option…..