Minimum wages are a popular topic. Barack Obama proposes a nearly 40% increase from $7.25 per hour to $10.10 and David Cameron has faced calls from some of his own backbenchers to raise Britain’s minimum wage of £6.31 per hour for over 21s. What are the economics?

A wage is the price of labour. At a given price/wage (W1) a certain amount of labour will be purchased (L1). We can show that with the following chart

Many argue that we can make people better off by either setting minimum wages or raising those that there already are. But what are the effects of this? Put another way, what is the effect of raising the price of labour? We can show that with the following chart 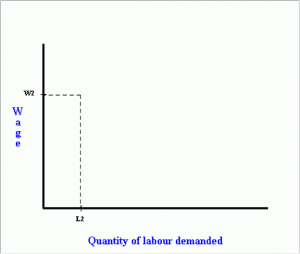 As with anything, if you raise its price the quantity of it demanded falls (caveats discussed below); there is less employment, in other words. As economists Paul Krugman and Robin Wells put it, “when the minimum wage is above the equilibrium wage rate, some people who are willing to work – that is, sell labor – cannot find buyers – that is, employers –willing to give them jobs.” (Krugman and Wells 2008) Indeed, most supporters of higher minimum wages tacitly accept this. When you ask them “If raising minimum wages makes people better off, why not raise them to £/$50 per hour?” they generally reply “Don’t be so silly”. Well, indeed. A minimum wage that high would be unaffordable for many employers and unemployment would increase.

But if the labour demand curve slopes downwards between £/$50 per hour and the current minimum wage why would anyone assume that it doesn’t continue to slope downwards below the minimum wage? In other words, might we not see an increase in employment if we reduced the minimum wage (in real or nominal terms) or eliminated it? At that point the conversation often moves to whether people should be able to hire/work at those lower wages, a question outside the scope of economics.

Now for those caveats. I recently asked some friends whether they would continue to buy the same amount of something if its price went up 25%. One answered “Well, cigarettes pretty much have (over a comparatively short time), and I pretty much have continued to buy them. But I admit that my sickness at having to pay that much for my brand has now driven me to tobacco during the week and the odd cigar at the weekend now (rather than the fiver per day for a pack of Embassy)”

What my friend Miguel has identified here is the notion of elasticity, the change in the quantity of something demanded resulting from a change in its price. If the quantity of something demanded varies greatly with changes in price then demand is ‘elastic’, if the quantity demanded changes very little (or not at all) with changes in price it is, like Miguel’s cigarettes, ‘inelastic’. We can show an inelastic demand for labour with the following chart

Here, with the steep curve given by the inelastic demand for labour, a large rise in the wage from W1 to W2 gives a comparatively small drop in employment, from L1 to L2.

But is labour demand inelastic? One of the factors determining elasticity is the availability of substitutes. If nothing else can fulfil the role of the good which is rising in price you will have to pay more (up to a point) but if something else will do well enough you will switch to buying that instead. And there is a substitute for labour; capital, the price of which is falling thanks to technological innovations just as people campaign to raise the price of labour. In a supermarket lately you might have used a machine to scan your own shopping. Those machines are direct substitutes for the labour of checkout staff. Or, as a meme humorously put it recently, 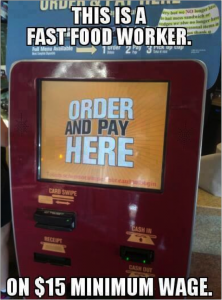 Another friend replied “Depends on the price to start with, the income of the person and their lifestyle. If Nigella Lawson was on a fixed rate water bill and it went up 25% then I think we can be pretty certain she would buy and consume the same amount.”

Indeed, as Tom says, rises in prices are felt differently by different people – and companies. Raising the price of labour by 40% might not have much of an effect on a big business operating on wide profit margins but it would be crippling for a smaller business with its much thinner margins. It’s curious that many supporters of ‘Buy Local’ also support minimum wage policies which give big businesses a crushing competitive advantage over smaller businesses.

So much for the theory, what about the practice? An extensive review of studies into the effects of minimum wages carried out in 2006 by economists David Neumark and William Wascher (Neumark and Wascher 2006) found that

minimum wages do not achieve the main goals set forth by their supporters. They reduce employment opportunities for less-skilled workers and tend to reduce their earnings; they are not an effective means of reducing poverty; and they appear to have adverse longer-term effects on wages and earnings, in part by reducing the acquisition of human capital.

Written By
John Phelan
More from John Phelan
Alan Greenspan’s pronouncements used to be described as ‘Delphic’ because of their...
Read More

15 replies on “The economics of the minimum wage”