Book Review: The Death of Money: The Coming Collapse of the International Monetary System by James Rickards 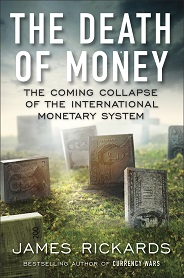 The title will no doubt give Cobden Centre readers a feeling of déjà vu, but James Rickards’ new book (The Death of Money: The Coming Collapse of the International Monetary System) deals with more than just the fate of paper money – and in particular, the US dollar. Terrorism, financial warfare and world government are discussed, as is the future of the European Union.

Though he quotes F.A. Hayek a few times, the Austrian School gets only one mildly disparaging mention in the entire book. This seems odd for an author who devotes a whole chapter to the benefits of the gold standard. His first bestselling book, Currency Wars, argues that currency wars are not just an economic or monetary concern, but a national security concern for the USA.

Rickards relies on emerging Chaos theories of economics and markets (1) to buttress his arguments in favour of sound money and prudent – limited – government. He uses the same insights, twinned with years of Wall Street experience, to explain why the “coming collapse of the dollar and the international monetary system is entirely foreseeable.”

One of Rickards’ key arguments is that exponential increases in the total size of credit markets mean exponential increases in risk. The gross size of derivative markets is the problem, irrespective of false assurances about netting, he claims. Politicians and central bankers have by and large learnt nothing from recent crises, and are still “in thrall to bank political contributions.”

He makes the case for the US federal government to reinstate Depression-era restrictions on banking activities and for most derivatives to be banned. As a former Federal Reserve Chairman, Paul Volcker, said in 2009, “the only useful thing banks have invented in 20 years is the ATM” – a sentiment Rickards would probably be sympathetic to.

The chapter dealing with the Fed’s hubris and what investment writer James Grant calls our “PhD Standard” of macroeconomic management will be familiar territory for readers of this site. The Fed is trapped between the rock of natural deflationary forces of excessive debt, an ageing population and cheap imports frustrating its efforts to generate a self-sustaining economic recovery and the hard place of annualised inflation of 2%. Rickards quotes extensively from eminent economist and Ben Bernanke mentor Frederic Mishkin, who noted in a 2013 paper titled Crunch Time: Fiscal Crises and the Role of Monetary Policy that “ultimately, the central bank is without power to avoid the consequences of an unsustainable fiscal policy.”

More interesting is the author’s attempt to map out what-happens-next scenarios. The chapter about the on-going transformation of the International Monetary Fund into the world’s central bank, and Special Drawing Rights (SDRs) into a global currency, is particularly insightful. Though Rickards doesn’t say it, Barack Obama’s former chief of staff (and current Mayor of Chicago) Rahm Emanuel’s dictum about never letting a crisis go to waste seems to apply here: hostile acts of financial warfare would lead to calls for more international regulation, and to more government intervention and monitoring of markets. Observers of the EU’s crab-like advance over the last half century will be familiar with the process.

Indeed, my only quibble with this book is Rickards’ starry-eyed take on the EU – soon to be “the world’s economic superpower” in his view. Though he makes a good argument – similar to Jesús Huerta de Soto’s – that relatively-tight European Central Bank monetary policy is forcing effective structural adjustments in the eurozone periphery, as well as in eastern states that wish to join the euro, his endorsement of other aspects of the EU seem too sweeping.

The author talks of the benefits of “efficiencies for the greater good” in supranational government, and how subsidiarity makes allowances for “local custom and practice”. But, as the regulatory débacle surrounding the Somerset floods has shown recently, EU rule frequently licenses bureaucratic idiocies that destroy effective, established national laws. Regulatory central planning for an entire continent is, I’d say, just as suspect as monetary central planning for one country.

The continent’s demographic problems are probably containable in the short-term, as Rickards says. But mass immigration is driving increasing numbers of white Europeans to far-right parties. And while there is consistently strong public support for the euro in the PIIGS (Portugal, Ireland, Italy, Greece and Spain), he’s silent on the broader question of the EU’s democratic legitimacy. No mention of those pesky ‘No’ votes in European Constitution, Maastricht and Lisbon Treaty referendums – or of the Commission’s own Eurobarometer polls, which show more and more Europeans losing faith in “the project”.

No matter I suppose: the eurocrats will rumble on regardless. But what was that quote about democracy being the worst form of government apart from all the others?

All in all though, this is a great book – even for someone like me who’s not exactly new to the economic doom ‘n’ gloom genre. As Rickards says at the end of his intro: “The system has spun out of control.”

References:
(1) For example Juárez, Fernando (2011). “Applying the theory of chaos and a complex model of health to establish relations among financial indicators”. Procedia Computer Science 3: 982–986.

4 replies on “‘The system has spun out of control’”