“Sir, Your headline “Fed’s grand experiment draws to a close” (FT.com, October 29) combines ignorance of what quantitative easing is with insouciance as to its potential effects – both of these mistakes being perennial features of FT coverage of QE. The “experiment”, as you call it, is not at an end; it is, with the purchases now ending, at its height. Only when the Fed starts selling the securities it has purchased back into the market will the US’s QE begin its withdrawal from that height; only when the last purchased security has been sold back into the market, or allowed to expire with consequent permanent expansion of the money supply, will the “grand experiment” (I would prefer that you called it “reckless gamble”) be at its end.

“Only at that point will we even start to see the results – on interest rates, on securities prices, on the economy. The outcome, as has so often been the case with such Keynesian experiments, is unlikely to be pretty.”

The other potential cause of a sell-off in markets is through a central bank mistake. Some think the liquidity created by QE will eventually leak into higher inflation, but there is no sign of this as yet. More likely is a decline into deflation which would lead to financial distress as debts become more difficult to repay.

“If that does show signs of happening, then we may indeed get to see QE4 rolled out. Daddy might have let go of the market’s hand for the moment but he’s still close by.”

Strange things are happening in the bond market. Few of them are stranger than the reports that a French fund management colleague of Bill Gross (formerly of Pimco) took such exception to public excoriation from his stamp-collecting associate that he quit the business to sell croques monsieur from a food truck. According to the Wall Street Journal, Gross told Jeremie Banet in front of Pimco’s entire investment committee that, “I never understand what you’re saying. Ever.” With those credentials, M. Banet is clearly supremely qualified to become the next chairman of the Federal Reserve. As it is, he elected to return to his job managing an inflation-linked bond portfolio.

He has his work cut out. Consider the sort of volatility that the 10 year US Treasury bond – the closest thing the financial world has to a “risk-free rate” – experienced on 15th October (below). 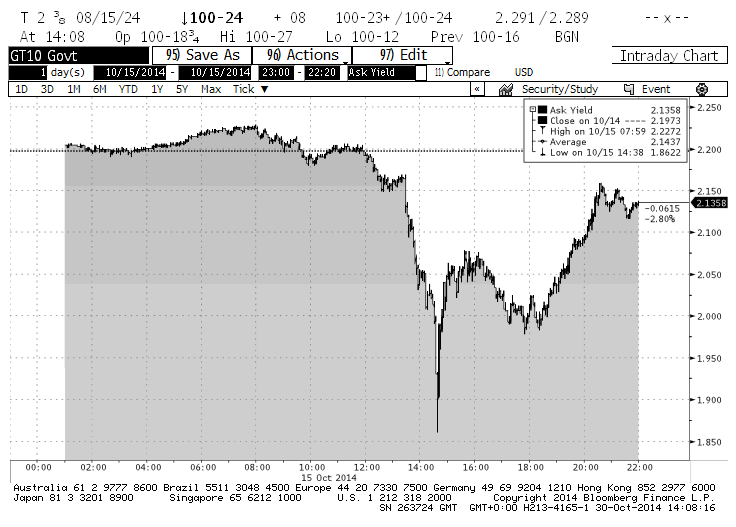 Having begun the day sporting a 2.2% yield, the 10 year note during the trading session experienced an extraordinary surge in price that took its yield down briefly towards 1.85%. Later in the same session the buying abated, and the bond closed with a yield of roughly 2.14%. During the same trading session, equity markets sold off aggressively (the UK’s FTSE 100 index, for example, closed down almost 3% on the day). What accounts for such melodrama ?

“There it was — a real market come and gone in half an hour, like a pregnant panda at Edinburgh zoo. What did it mean and what should you do? You should pay attention to what happens to the direction of prices when volumes surge and markets work. When the veil is lifted, pay attention to what you see beneath. Last Wednesday, in the space of half an hour of active trading, the Treasury market had one of its most rapid rises ever recorded and equities fell sharply.

“There is a very simple lesson that when the markets finally break through the manipulation they move to price in deflation and not inflation. This is key because it means financial repression has failed. Such repression requires the artificial depression of interest rates but, crucially, it must be paired with boosting inflation above such rates. On October 15th 2014, if only for a few short minutes, market forces broke out and the failure of central bankers was briefly evident.”

These days, you don’t tend to hear the words ‘failure’ and ‘central bankers’ in the same sentence (unless the topic happens to be Zimbabwe). But perhaps the omniscience and omnipotence of central bankers is somewhat overstated. On October 29th, the US Federal Reserve followed a long-rehearsed script and announced that it had “decided to conclude its asset purchase program [also known as QE] this month.”

So now stock and bond markets will have to look after themselves, so to speak. The Economist’s Buttonwood columnist described it as “Letting go of Daddy’s hand”. That coinage nicely speaks to the juvenilisation to which markets have been reduced during six long years of financial repression, unprecedented central bank asset purchases, and the official manipulation of interest rates. Only the asset purchases have abated (for now): the financial repression, one way or another, will go on.

Whether the asset purchases have really disappeared, or merely been suspended, will be a function of how risk markets behave over the coming months and years. We would not be in the least surprised to see petulant markets rewarded with yet more infusions of sweets.

Yet some still associate QE with success. The Telegraph’s Ambrose Evans-Pritchard, or his sub-editor, reckon that central bankers deserve a medal for saving society. He dismisses any scepticism as “hard money bluster”. Economist David Howden, on the other hand, can see somewhat further than the end of his own nose:

“One of the true marks of a great economist is an ability to see past the obvious outcomes and into the veiled results of policies. Friedrich Bastiat’s great essay on “that which is seen, and that which is not seen” provides a cautionary parable that disastrous analyses result when people don’t bother looking further than the immediate results of an action.

“Nowhere is this lesson more instructive than with the Fed’s QE policies of the past 6 years.

“Consider the Austrian business cycle theory. The nub of the theory is that changes in the money market have broader results on the greater economy. In its most succinct form, when a central bank pushes interest rates lower than they should be (by buying assets, for example), the greater economy gets distorted. Some of these distortions are immediately apparent, as consumers buy more goods and everyone takes on more debt as a result of lower interest rates. Some of the distortions are not immediately apparent. The investment decision of firms gets skewed as interest rates no longer reflect savings preferences, and the whole economy becomes fragile over time as erroneous investments add up (what Mises coined “malinvestments”).

“When a financial crisis or economic recession hits, it’s almost never because of some event that apparently happened at the same time. The crisis of 2008 did not occur because of the collapse of Lehman Brothers. It happened because the whole financial system and greater economy were fragile following years of cheap credit at the hands of the Greenspan Fed. If anything, Lehman was a result of this and a great (if unfortunate) example of the type of bad business decisions firms are lured into by loose money. It wasn’t the cause of the troubles but a result of them. And if Lehman didn’t go under to spark the credit crunch, some other fragile financial institution would have.

“The Great Depression is a similar case in point. It wasn’t the stock market crash in 1929 that “created” the Great Depression. It was a decade of loose money policies by the Fed that created a shaky economy. Again, if anything the stock market crash was the result of stock prices being too buoyant and in need of a repricing to reflect economic fundamentals. Just like today, stocks rose to such storied heights as a result of cheap credit, not because of the seemingly “great” investments funded by it.

“The Fed has lowered interest rates since July 2006. We have just come off the period with the most rapid and extreme increase in the money supply ever recorded in American history. The seeds of the next Austrian business cycle have been sown. In fact, they are probably especially fertile seeds when one considers that the monetary policy has been so loose by historical standards. Just as cheap credit of the 1920s beget the Great Depression, that of the 1990s beget the dot-com bust and that of the mid-2000s beget the crisis of 2008, this most recent period will also give birth to a financial crisis.”

Although our crystal ball is no more polished than anyone else’s, our fundamental views are clear. Bonds are already grotesquely expensive, yet may get more so (we’re not investing in “the usual suspects” so we don’t much care). Most stock markets are pricey – but in a world beset by QE (and prospects for more, in Europe and Asia) which prices can we really trust ? By a process of logic, elimination and deduction, out of the major asset classes, only quality listed businesses trading at or ideally well below a fair assessment of their intrinsic worth offer any semblance of value or attractiveness. Pretty much everything else amounts to nothing more than paper, prone to arbitrary gusts from some very powerful, and very windy, bureaucrats. We note also that former Fed chairman Alan Greenspan, no doubt looking to polish his legacy, managed to front-run the Fed’s QE announcement by pointing to the merits of gold within a government-controlled, fiat currency system. Strange days indeed.

Written By
Tim Price
More from Tim Price
“The snag for them is that it happened on Monday. And all...
Read More

0 replies on “Into the unknown”