The dollar is always losing value. To measure the decline, people turn to the Consumer Price Index (CPI), or various alternative measures such as Shadow Stats or Billion Prices Project. They measure a basket of goods, and we can see how it changes every year.

However, companies are constantly cutting costs. If we see nominal—i.e. dollar—prices rising, it’s despite this relentless increase in efficiency. This graphic illustrates the disparity (I credit Tom Selgas for a brilliant visualization, which I recreated from memory). 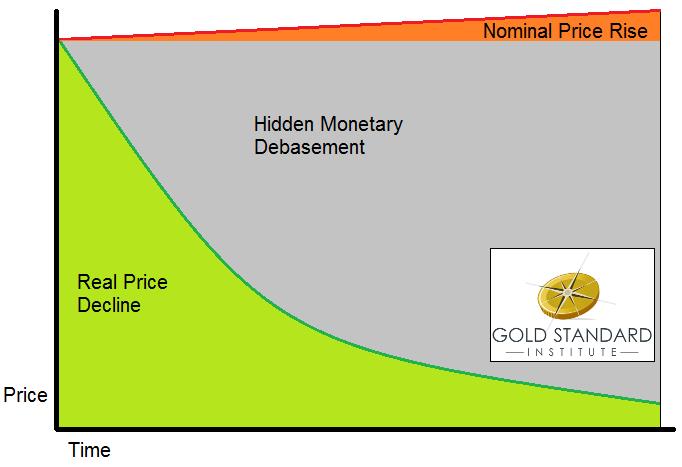 CPI measures only the orange zone, the tip of the iceberg. Most people don’t see the gray zone, and that’s a result of the greatest sleight of hand ever.

We need an accurate way to measure monetary debasement. For example, in retirement planning it’s tempting to divide your net worth by the cost of consumer goods. This seems to show your purchasing power. For example, if you have $200,000 and the cost of groceries for a year is $20,000 then you can eat for ten years.

However, this approach is flawed. To see why, let’s briefly consider primitive times when there was no lending or banking. People had to set aside some of their income, to buy a durable good like salt or silver—hoarding. When they could no longer work, they sold a little bit every week to buy food—dishoarding. People accumulated wealth while working, and dissipated it in retirement.

Life got a lot better with the advent of lending, because interest enables people to live on the income generated by their savings. People no longer consumed their principal, worrying about outliving their savings.

Capital assets should be valued in terms of how many groceries they can buy, not by liquidation, but by production. Unfortunately, monetary policy is making this increasingly difficult. Interest rates have been falling for over three decades, and now there’s scant yield to be had anywhere. We are regressing to the dark ages of paying for retirement by dishoarding.

We need a different way of looking at monetary debasement. I propose Yield Purchasing Power (YPP).  YPP is the yield on assets divided by the Consumer Price Index (or other index). The idea is to look at the productivity of assets to see what you can really afford.

Let me explain YPP with a simple example. If hamburgers sell for $5 and interest is 10%, then $50 of capital lets you eat one burger per year. Suppose the price of the burger doesn’t change, but the interest rate falls to 0.1%. You now need $5,000 in capital to earn that burger. Unfortunately, if you still only have $50, then you only get one burger every 100 years.

CPI doesn’t show this collapse in purchasing power, but YPP does.

Let’s take a look at YPP since 1962. The graph is inverted, to make the trend easier to see. 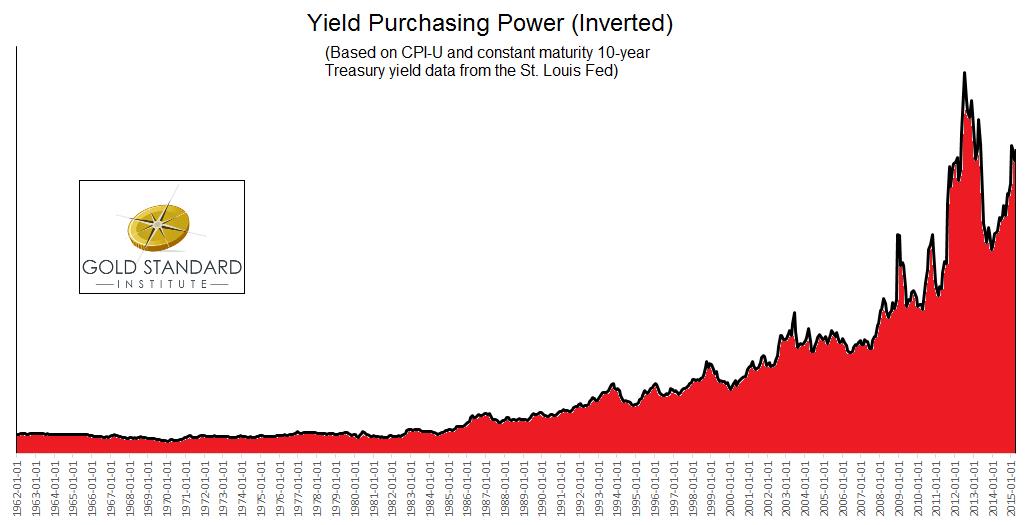 It’s interesting that the drop in purchasing power (rising in this inverted graph) begins around 1984, when the conventional view said inflation was tamed. CPI may have slowed down, but interest was falling too.

You need more and more assets to afford the same lifestyle. If your assets don’t keep up, then you have to liquidate your capital.

One reply on “Think Different About Purchasing Power”