[This was first published at Zero Hedge here http://www.zerohedge.com/news/2015-06-08/non-gaap-revulsion-arrives-experts-throw-all-over-made-phony-smoke-and-mirrors-profi]

One of the recurring stories on Zero Hedge has been the increasingly more blatant fabrication of corporate bottom line “earnings” with the explicit blessing of both accountants and regulators, in the form of non-GAAP results. Our most recent observation conducted two months ago showed that the variation between GAAP and non-GAAP EPS has stretched to the widest degree since the financial crisis.

The chart below shows total S&P non-GAAP EPS with the GAAP component broken out in Green. 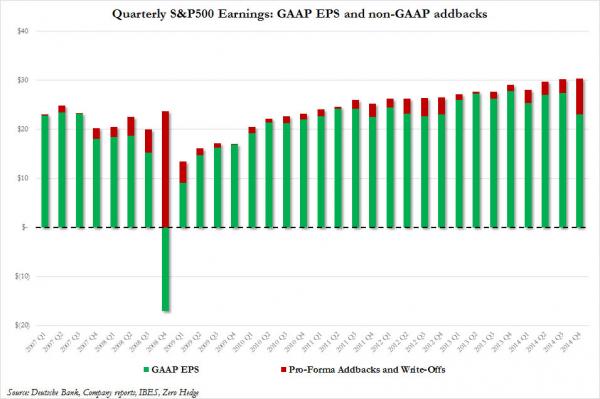 Specifically, the data revealed that the amount of non-GAAP addbacks and various other accounting and financial engineering gimmicks has been higher just once in history: in Q4 of 2008. 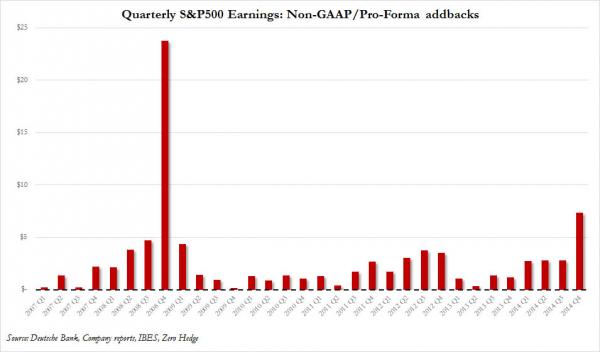 Furthermore, as we have shown every single quarter, nobody has fabricated their bottom line more than Alcoa: 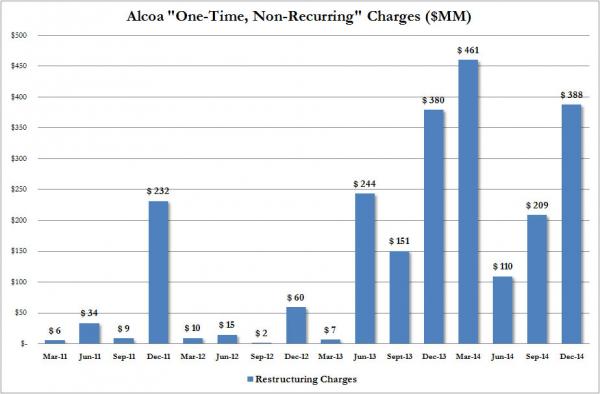 After years of crusading against this clear farce of misreporting “earnings” by management teams who are engaging in a great fraud against their shareholders, one in which both accountants, bank advisors and regulators are all complicit, we are delighted to see that finally the mainstream press has taken the bullshit that is non-GAAP “EPS” to task.

In a report by AP’s Bernard Candon, titled “Experts worry that ‘phony numbers’ are misleading investors” and subtitled, in case there is any confusion what the punchline is, “Experts worry about ‘smoke and mirrors’ in earnings reports as stocks hit record after record” we read that the “record profits that companies are reporting may not be all they’re cracked up to be.”

AP adds that “as the stock market climbs ever higher, professional investors are warning that companies are presenting misleading versions of their results that ignore a wide variety of normal costs of running a business to make it seem like they’re doing better than they really are.”

And as we started warning about this “misleading” spin on reality in 2011, we are happy to report that this time it took the media only 4 years to catch up.

Here is what else the AP found, which we repost in its entirety because alongside blaming HFTs for the next market crash, so too after the next crash, it will be management teams who have gravely abused their non-GAAP fugding privileges will be put on trial in a public court to appears shareholders who have lost their life’s savings believing “record” corporate earnings were real and accurate.

The financial analysts who are supposed to fight corporate spin are often playing along. Instead of challenging the companies, they’re largely passing along the rosy numbers in reports recommending stocks to investors.

“Companies are tilting the results,” says fund manager Tom Brown of Second Curve Capital, “and the analysts are buying it.”

An analysis of results from 500 major companies by The Associated Press, based on data provided by S&P Capital IQ, a research firm, found that the gap between the “adjusted” profits that analysts cite and bottom-line earnings figures that companies are legally obliged to report, or net income, has widened dramatically over the past five years.

At one of every five companies, these “adjusted” profits were higher than net income by 50 percent or more. Many more companies are in that category now than there were five years ago. And some companies that seem profitable on an adjusted basis are actually losing money.

It wasn’t supposed to be this way. After the dot-com crash of 2000, companies and analysts vowed to clean up their act and avoid highlighting alternative versions of earnings in a way that could mislead investors.

But Lynn Turner, chief accountant at the Securities and Exchange Commission at the time, says companies are still touting “made-up, phony numbers” as much as they did 15 years ago, perhaps more, and few experts are calling them out on it.

“The analysts aren’t doing enough to get behind the numbers that management gives them to find out what’s really going on,” Turner says.

Offering an alternative view of profits that leaves out various costs is not new. It’s perfectly legal, and sometimes helpful as a tool for investors to gain insight into how a business is doing.

But with stocks breaking record after record and the current bull market entering its seventh year, there’s more money riding on the assumption that the earnings figures being touted by companies and analysts are based on sound calculations.

“The longer the rally, the bigger the downside because of all the smoke and mirrors,” says money manager John Del Vecchio, co-author of “What’s Behind the Numbers?” a book on how profit reports can mislead.

Most of the time, the adjustments made companies look better by leaving out things like costs related to laying off workers, a decline in the value of patents or other “intangible” assets, the value of company stock distributed to employees, or losses from a failed venture. Critics argue that these are regular costs and shouldn’t be excluded.

In a crackdown after the dot-com crash, regulators required companies to lay out clearly in their financial reports how they arrived at alternative versions of their profits. The bottom-line figures have to be prominently reported, too. But it’s not clear the extra details have helped.

“The data is more confusing than it’s been in a long time, and the reason is all the junk they put in the numbers,” says fund manager Michael Lewitt of the Credit Strategist Group. He says analyst reports don’t help, and finds himself spending too much time sifting through the same “nonsense” figures he confronted back in the dot-com days.

Michelle Leder, founder of Footnoted.com, which produces detailed analyses of financial statements, says most investors don’t even bother to sift, preferring instead to seize upon a single number, often the wrong one.

“People just want to know the number,” she says. “They don’t care how the sausage is made.”

Boston Scientific, a maker of medical devices like stents used to prop open arteries, had adjusted profits of $3.6 billion in the five years through 2014, according to analysts’ calculations. But if you include a write-off for a failed acquisition, various “restructuring” charges and costs stemming from layoffs and lawsuits, it’s a different picture entirely: $4.9 billion in net losses.

In a brief talk to analysts in April, the chief financial officer at Boston Scientific used the word “adjusted” in referring to results 34 times, twice every minute, on average. The word is also littered throughout the company’s presentations and financial reports. In recent years rivals Medtronic, Stryker and Zimmer have also highlighted their results this way, says Raj Denhoy, an analyst at Jefferies, an investment bank.

Aluminum giant Alcoa has taken “restructuring” and related charges in 20 of the past 21 quarters. The company reported net losses of more than $900 million in the five years through 2014, but analysts have largely shrugged them off because they’re tied to a strategic shift that involves getting rid of unwanted businesses. Analysts prefer to point to the $3.1 billion in adjusted profits during that time.

To be fair, analysts see the adjusted figures more as a tool for helping estimate future profits than as a judgment on the past. They say many losses and charges are not likely to recur and shouldn’t be included in their calculations.

But in an age of constant change, when some companies revamp their business repeatedly, many one-time items are starting to seem not so one-time anymore.

“If you have to reinvent the company every couple of quarters, then it’s not a one-off,” says accounting expert Jack Ciesielski, longtime publisher of The Analyst’s Accounting Observer, a newsletter.

For their part, Boston Scientific and Alcoa say the extra figures they provide help shed more light on their companies. Boston Scientific says the numbers allow investors to see the company “through the eyes of management” because they are the same ones its executives use in making decisions. Alcoa says its financial results reflect a “significant transformation” to make it more competitive.

Another number often missing in adjusted profit figures is the value of stock awarded to employees. This stock-based pay, the argument goes, requires no exchange of cash, so it doesn’t affect a company’s earnings power. Critics say stock distributions are a part of compensation and should be counted as an expense.

“What if they said they’re going to pay for rent by issuing stock?” asks Brown of Second Curve Capital. “Would you then (exclude) rent” in calculating earnings?

Salesforce.com, a leader in cloud computing, routinely excludes the cost of stock compensation from figures it touts to investors, and analysts largely do the same. Analysts say the company earned $1.2 billion in adjusted profits in the five years through 2014. Its bottom-line result, including stock pay and other costs, was a $712 million loss.

Brian Rauscher, chief portfolio strategist at Robert W. Baird & Co., says stocks can continue to rise based on an inflated account of company profits for months or even years, but not indefinitely. He says it’s like a bomb no one can see has been placed under the market: You know it’s there, but you’re not sure when it will go off.

“We don’t know if the fuse is a few inches or a few miles,” he says.