“We don’t see a recession coming in the United States.”

“And with the US corporate sector up to its eyes in debt, the one asset class to be avoided – even more so than the ridiculously overvalued equity market – is US corporate debt. The economy will surely be swept away by a tidal wave of corporate default.”

The US profits data are certainly disappointing, as the chart below makes clear. 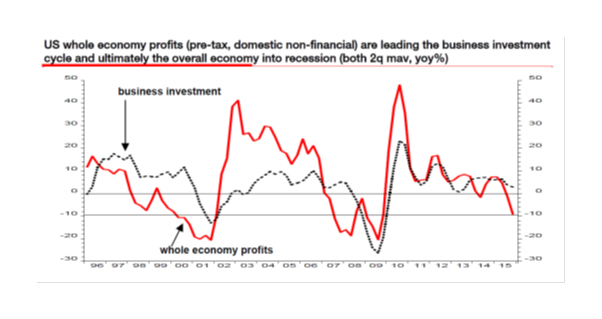 It also seems likely that US corporate profits, as a percentage of GDP, are in the process of mean reverting after reaching all-time highs, as this chart from the St. Louis Fed shows:

As to prospects for US corporate debt, especially high yield.. Suffice to repeat the maxim that more money has been lost reaching for yield than at the point of a gun. That is likely to hold true especially when cash interest rates and bond yields have been artificially suppressed by the world’s central banks. What is an investor to do ?

First, a pertinent snapshot from history.

On May 29th, 1969, Warren Buffett sent out his annual letter to the partners of the Buffett Partnership, Ltd. Within it he wrote:

“..it seems to me that.. opportunities for investment.. have virtually disappeared, after rather steadily drying up over the past twenty years.. and a swelling interest in investment performance has created an increasingly short-term oriented and (in my opinion) more speculative market.”

Buffett was winding up the partnership. He could barely have been more candid in his explanation as to why:

“I just don’t see anything available that gives any reasonable hope of delivering.. a good year and I have no desire to grope around, hoping to “get lucky” with other people’s money. I am not attuned to this market environment, and I don’t want to spoil a decent record by trying to play a game I don’t understand just so I can go out a hero.”

The stock market then dropped for the next five years.

As individual investors, not a single one of us is under the remotest obligation to play a game we don’t understand. That requirement does apply, however, to any institutional manager labouring under the curse of the benchmark. Being forced to play an irrational game without conviction may account for the peculiarly dismal fund manager performance reported during Q1 2016 in a survey compiled by Bank of America Merrill Lynch. Just 19% of US large-cap managers beat the S&P 500 Index – the worst showing for any quarter in a series going back to 1998. Only 6% of growth funds beat their benchmark. Only 19.6% of value managers outperformed their own index.

The obvious caveat is that one calendar quarter is not, by itself, freighted with overmuch statistical significance, nor should it ever be. But the extent of the comparative underperformance does raise the question of whether the fund management industry as a whole is fit for purpose. Because in a survey covering a much longer period of 10 years (the SPIVA US Scorecard for year-end 2015), conducted by S&P Dow Jones Indices, 82.1% of large-cap managers, 87.6% of mid-cap managers, and 88.4% of small-cap managers failed to outperform on a relative basis.

While Warren Buffett was out of the US stock market between 1969 and 1973, many stocks fell by a dramatic margin but their impact on the indices was largely cancelled out by the relentless rise of the so-called ‘Nifty-Fifty’ glamour stocks – arguably the equivalent of today’s ‘FANGs’. And then even the ‘Nifty-Fifty’ succumbed to the forces of gravity and sheer economic logic, and by end-1973 the market was looking cheap again, and Buffett was back at work within it.

The following table, courtesy of Kokkie Kooyman of Sanlam Investment Management, is instructive. Although Buffett had elected to wind up his limited partnership in 1969, he kept his business interests in the Berkshire Hathaway holding company as a going concern. The table shows the comparative value of $10,000 invested in Berkshire Hathaway stock, and in the S&P 500 Index, beginning in 1971.

By 1974, notwithstanding the new-found valuation opportunity extant in the broader market, Berkshire Hathaway stock was down by 43%, versus a decline of 25% in the S&P 500. By 1975 the discrepancy was even more marked. Berkshire was down by 46% even as the S&P 500 had recouped all of its losses and then some. Forget just one quarter of comparatively poor performance. What about an accumulated four years of it ? Would you have sold ? Of course, we know with the benefit of hindsight, and this table of subsequent returns, that selling Berkshire Hathaway in 1975 would have been a disastrous decision. As the famed value manager Peter Cundill once observed,

“The most important attribute for success in value investing is patience, patience and more patience. The majority of investors do not possess this characteristic.”

Which means that the majority of investors, like those US managers cited above, are destined to achieve inferior longer term returns.

Constant media coverage of (and the fund industry’s own focus on) the US stock market has crowded out coverage of many other markets that have been in the wilderness for years. Fund manager David Iben, in a note entitled ‘The Big Long’, points out that after the 2007 bubble and subsequent waves of QE, malinvestment “is now prevalent in finance, energy, commodities, consumer discretionary goods, emerging markets..” Investors fretted that stock prices were unsustainably high in 2007, a view validated by the ensuing crash. But “eight years later, prices are even higher for many US stocks, for high-end real estate, art, collectibles, tuition, healthcare and entertainment.” And tens of trillions of bonds are trading at the highest prices in the history of mankind. But as Iben suggests, this is not the beginning of a bear market – for many underlying investments, outside the major US indices, we are already in the late stages of a bear market.

MSCI All Country World Index ex-US, for example, looks somewhat different from MSCI World (which itself has a 59% weighting to the US):

Or consider the Baltic Dry Index:

Value is in the eye of the beholder. It remains a function of where you look. If your gaze is fixed only on the US stock markets, the chances are you’re not likely to see much obvious value on offer. If your field of view is geographically unconstrained, the chances are you can now see plenty of opportunities worthy of consideration. As Shelby Davis said, “Bear markets make people a lot of money, they just don’t know it at the time.” The bear market in the US may or may not be about to start. The bear market elsewhere has already been with us for years. Time to be bullish – provided it’s in the right markets. (If you want to know which markets we consider ‘the right markets’, you can see where we’ve put our investment convictions to work here. The S&P 500 index currently trades on a p/e of 19 and a price / book of 2.8x. Our unconstrained global value fund currently trades on a p/e of just under 14 and a price / book of 1.1x. Pay money. Take choice. But be aware of the risks of overpaying.)

Written By
Tim Price
More from Tim Price
“Mr Draghi announced this week that the ECB would not buy bonds...
Read More

0 replies on “Time to be bullish”