Money, generally accepted medium of exchange, acts as a veil that confuse and blurs economic relations. This is especially true when it comes to intertemporal considerations. Whilst probably the most important institution in a free market, money can be highly destructive when politicized. Why? Because politics is about power and distribution of real wealth. And since money affect almost every single transaction, politics can span throughout society with ease when in control of money. Amchel Rothschild was spot on when he allegedly said “[g]ive me control of a nation’s money supply, and I care not who makes its laws.” Power over money is power over people and power over people is, well, pure power. Money is thus the most sacred tool in a statist’s toolbox and has become instrumental in their quest to control society and allocate resources as they see fit.

It is within this context the monstrosity called the euro need to be analyzed. By pooling Western European countries within the realm of one central bank, power over people increases immensely. There is a catch though; as power increases, greed and corruption increases with it and the temptation to go too far is obvious for all to see.

Money coordinates production with consumption, saving with investment and properly done, money will create the means for a smooth flow of resources among the millions or even billions of people transacting with each other. Politicize money and economic imbalances, between economic agents and even over time, will grow and destabilize the system. It is no exaggeration to say that the welfare and prosperity of the populace depends on a well-functioning monetary system.

The most important function money has, in our view, is its ability to create recessions, or as we like to call it, disruptions of unsustainable resource flows. In a sound system, money will make sure recession occur before the imbalance will even be felt by the broader public. Sound money will remove tensions in fault lines before they turn into a massive earthquake with devastating consequences. However, it is true that economic imbalances can be fed for years if sound money is replaced with a politicized fiduciary medium. And herein lies the crux of the problem, no power hungry politician will voluntarily end the economic prosperity a boom apparently foster. Therefore, they feed it with money created ex nihilo instead; chipping away trust and letting the bubble grow larger and larger. As imbalances becomes ever more entrenched in the economic system, the mere thought of terminating it becomes terrifying. Abruptly ending today’s imbalances will be a truly cataclysmic event, so the once greedy money masters feel they have no choice but to keep the boom going; petrified of the pitchforks that may come their way if they do not.

This is where we are today. Central bankers are painting themselves further and further into the proverbial corner with no chance of getting out unscathed.

When the euro was first created it looked like a boon to all members. In the chart below we depict Irish and Greek contribution to euro area M3. Prior to the crisis these metrics grew at an astounding pace; between 2006 and mid-2007 the Irish M3 grew by an average of 30 per cent annual rate, and by 20 per cent in the two years prior. How was this even possible? In the pre-euro era the Irish punt would surely depreciate dramatically in value if they created new currency units at what would have then been considered a reckless rate. In a sound commodity based monetary regime recipients of new money would before soon exchange them for gold and the monetary inflation would come to a screeching halt before it could do too much damage.

Not within the euro system though. Irish banks created new loans so its customers could buy houses, which helped bring the price of real estate to new highs and naturally so did the value of the collateral posted to banks for new credit. Higher collateral valuations were obviously used to back even more loans ad infinitum. Inevitably, large sums leaked out of Ireland as every European, or even global citizen, would accept the Irish euros as a safe payment – whether the euro was manufactured in Ireland or Germany did not matter as they were both an equal claim on euro area production and assets. 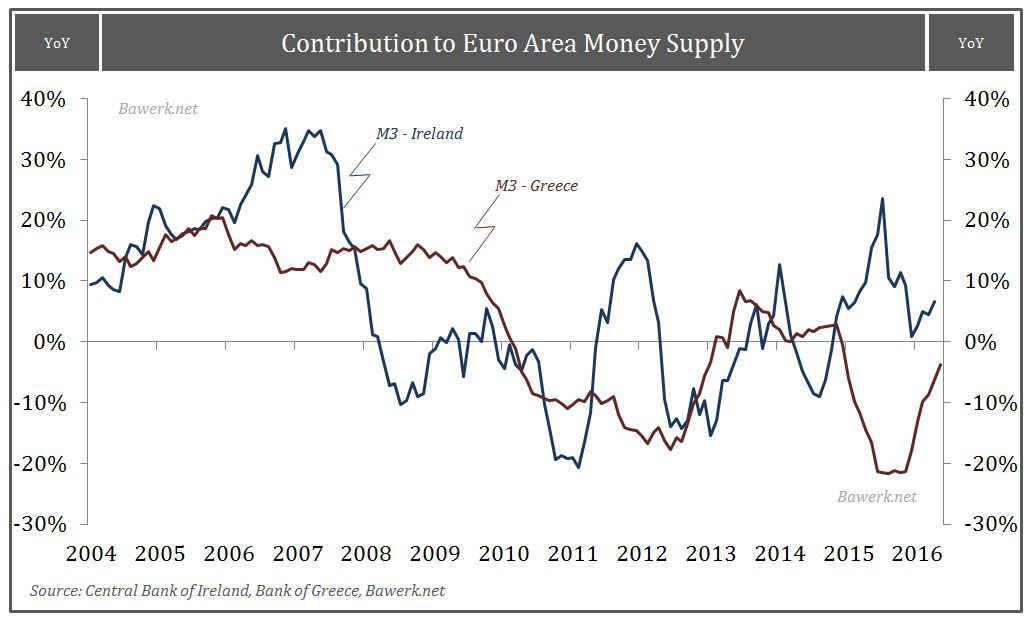 Unsurprisingly, the current account deficit quickly got out of control. Other peripheral countries fared even worse. There were absolutely no correcting mechanisms to halt these grossly unsustainable capital flows. As long as banks kept within easily manipulated capital standards, and they did because collateral values rose alongside the monetary inflation, they could produce euros as there were no tomorrow. The whole edifice actually turned into a tragic of the commonswhere the manufacturing base in Europe should be exploited to the fullest through money printing, before someone else did the same thing.  Also note that the European Central Bank (ECB) was, as every central bank is, fixing the price of its money. Increased demand for monetary reserves would normally put pressure on its price, but with zero cost supply, the ECB met increased demand by creating more money. It is the only “market” that actually works according to Keynesian principles where demand creates its own supply. There were essentially no checks on the amount of euros that could be created.

Naturally there is a limit to this madness; when Germans finally started to question the prudence of sending all the euros they received from peripheral countries back to the same countries to fund their current account deficits the vendor funded flow stopped and the boom came to an abrupt end. In enter the ECB with all sorts of backstops and promises to do “whatever it takes” to maintain the imbalances.

Somehow, the periphery still manages to fund current account deficits for years, even in the midst of crisis. Who on earth would be willing to fund this perversion? 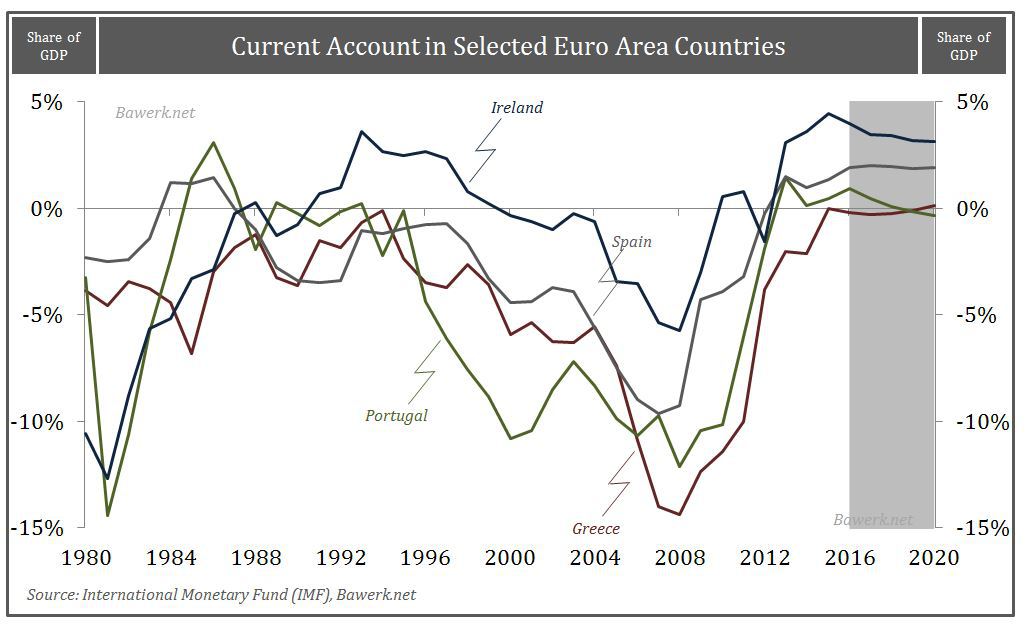 TARGET2 creates a liability for, say, the Bank of Spain, when a Spaniard sends money to a German bank through the Bundesbank, which in turn receives an asset on their balance sheet. These balance sheet items are cancelled when the final German recipient deposits his money at the bank if the bank then uses the proceeds to “invest” in Spanish banks, bonds, stocks or whatever it might be. However, if there are no reverse capital flows, if say the German bank or depositors are not willing to fund Spanish deficits anymore, balance sheet items at the national central banks accumulate. Instead of a much-needed restructuring of unsustainable resource flows, the TARGET2 allows the old ways to continue. In other words, even after taking away the correcting mechanism a sound commodity based money would have or the effect from a deprecating fiat money, the euro system allow trade to continue when people refuse to fund these imbalances.

We have followed TARGET2 for a long time as it essentially morphed into one of the largest bail-out facilities in Europe and give us a good indication on the stresses building in Europe. TARGET2 assets and liabilities peaked in August 2012, incidentally at the time Draghi gave his infamous speech. Since Draghi promised to bail-out everyone in need, Germans, half-heartedly believed him and started to send euros back to the periphery. TARGET2 imbalances shrank until the end of 2014, but then started to climb again and are now close to record levels. 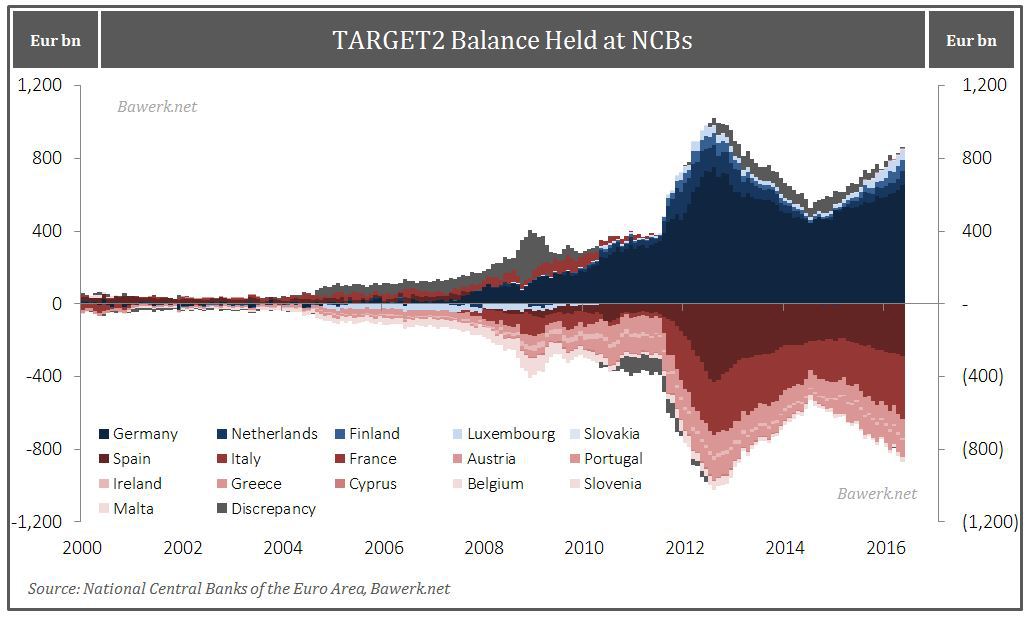 What the TARGET2 chart shows us is a breakdown of the central bank narrative. Despite the alphabet soup of bail-out facilities provided by the ECB, people still do not trust the system. In our view, the TARGET2 chart is the best way to assess trust in central banks and as it clearly shows, the narrative is failing.

Linking this back to our introduction the TARGET2 chart actually confirms and substantiates what we see in politics. The recent Brexit vote, with all its subsequent noise about following the Brits out of the EU witnessed in continental Europe and the general Pasokification of the political center is clear testimony off waning power by the elite. People are gradually rebelling against the failed status quo.

It seems impossible for Draghi to reestablish monetary confidence. While it looked promising back in 2012, the crisis of confidence keeps lingering on and the big reset seems to come closer by the day. Expect even more destructive creativity, from all central banks around the world, in the coming months. You know the global central bank narrative have failed completely when the Fed cut rates and the dollar rallies. Then it is too late to buy your gold coins.

Written By
Other Writer
More from Other Writer
The measures implemented by governments in the eurozone have one common denominator:...
Read More

0 replies on “Off Target”