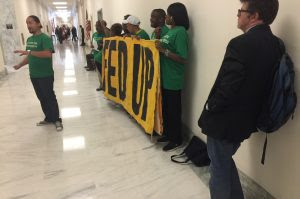 I’m fed up with the Fed too, with its chronic policy failures. A lot of evidence shows the Federal Reserve to be a prime cause of lackluster job growth and sluggishness in wage increases.

That said, sometimes a cure is worse than the disease. Now the left, with the support of Hillary Clinton, is threatening to take us, to mix the metaphor, out of the frying pan and into the fire.

Last week, about a dozen arch-progressives from “Fed Up” attended a hearing of a subcommittee of the House Financial Services Committee, “Federal Reserve Districts: Governance, Monetary Policy, and Economic Performance” in Rayburn House Office Building. I also attended.

The title of the hearing sounds boring. What was really going on was anything but boring.

I wrote about this hearing at length in my most recent column at Forbes.com, “The Left’s Fed Up Makes A Naked Power Grab For Control Of The Fed“:

In scope, the left’s plan makes trivial by comparison Auric Goldfinger’s “Operation Grand Slam” to contaminate America’s gold holdings at the US Treasury Depository at Fort Knox. Goldfinger planned to turn them radioactive. Those holdings amounted, in 1964, to about $14 billion. They are now valued at close to $200 billion.

Either way, a tidy sum. Yet it’s just a nickel compared to the Fed’s more than $4 trillion holdings.

Most impressive. The left is undertaking its own Operation Super Grand Slam.

It is doing so proficiently and systematically. Unfortunately for the left, fortunately for America, it has run into a real life James Bond: House Monetary Policy Subcommittee Chairman Bill Huizenga (R-MI). The irresistible force has met its immovable object. 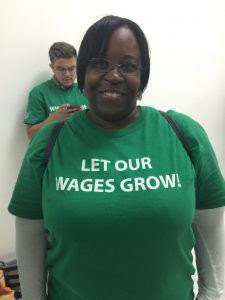 A Fed Up activist outside a Congressional hearing (photo credit: Ralph Benko)

Win or lose a skirmish, the left is relentless. There is a tug-of-war inside (with a lot of pressure from outside) the Fed as to whether it should “ease” or “tighten.” In practice this mostly refers to whether the Federal Open Market Committee should raise or lower the discount rate, the one interest rate over which the Fed has direct authority.

Those who favor lower interest rates for the economy are called “doves.” Those who favor higher, “hawks.” As for me, I believe the markets, not a group of central government planners, should set interest rates. Central planning has failed whenever it has been applied. Just ask those who lived in the USSR how that Gosplan thing worked out. Maybe that makes me an eagle.

Job creation, including rising wages (which, being a worker, I enthusiastically support) is one of the two key elements in job creation and rising wages. I am in complete solidarity with Fed Up’s ends, although not its means.  Fed Up is a project of the Center for Popular Democracy, which Wikipedia says is the successor, at least in part, to the somewhat notorious ACORN. According to the Center’s website:

The Federal Reserve has tremendous influence over our economy. Although our communities continue to suffer through a weak recovery and economic inequality keeps growing, corporate and financial interests are demanding that the Fed put the brakes on growth so wages don’t rise. There is a real danger that in early 2015 [sic], the Fed will cut the legs out from the recovery before the economy reaches full acceleration, costing our communities millions of jobs and workers tens of billions in wages.

The Democratic presidential contender is backing a proposal to remove private bankers from all the Fed’s regional boards, stripping them of their leadership role at the institution. That position is shared by a coalition of progressive groups and the Democratic Party platform committee. Sens. Elizabeth Warren (D-Mass.) and Bernie Sanders (I-Vt.) have also raised concerns about the over-representation of banks and corporations in senior roles at the Fed.

Top Federal Reserve officials, who have long dreaded interference by presidents and Congress, are vehemently opposed to the idea, arguing that the expertise of private bankers is vital. Two Fed presidents testified against the proposal on Wednesday before a House Financial Services subcommittee.

Clinton’s campaign, which is eager to boost support from progressive Democrats, has made a big play to align her with an increasingly influential coalition, called Fed Up. The group, organized by community and labor groups, is pushing for continued low interest rates to boost job growth. Trump on Monday called on the Fed to “change” rates, saying it was keeping them artificially low and creating a “false economy,” drawing the rebuke from Clinton.

Fed Up has also been promoting the proposal to restrict individuals associated with financial institutions from serving on the boards that oversee regional Fed banks across the country.

Earlier this year, Clinton gave the movement a big boost when her campaign announced that the Fed “needs to be more representative of America as a whole” and that there were “long overdue” reforms including the idea to take bankers off the Fed boards.

While the mainstream media is focused on non-issues, such as why Hillary Clinton delayed publicly announcing her diagnosis of pneumonia, or side issues, such as the presidential candidates dueling family leave proposals, the real battle for the American Dream — Prosperity and Justice For All — is taking place out of the limelight. It is being covered for political junkies in venues like Politico and the editorial page of The New York Sun and for economic policy junkies in places like CNBC.com and Forbes.com.

Donald Trump and Hillary Clinton have begun to clash over the Fed. It’s a big deal.

Let us hope Donald Trump escalates the matter and goes right to the essence — his instinctive favor of the gold standard — putting the critical issue of “good money” versus “easy money” center stage in the upcoming presidential debates.

Written By
Ralph Benko
More from Ralph Benko
A view from America, originally published at Forbes Blogs. The signals were...
Read More

One reply on “Fed Up! Hillary Clinton in Cahoots with Attempted “Hostile Takeover” of the Fed”