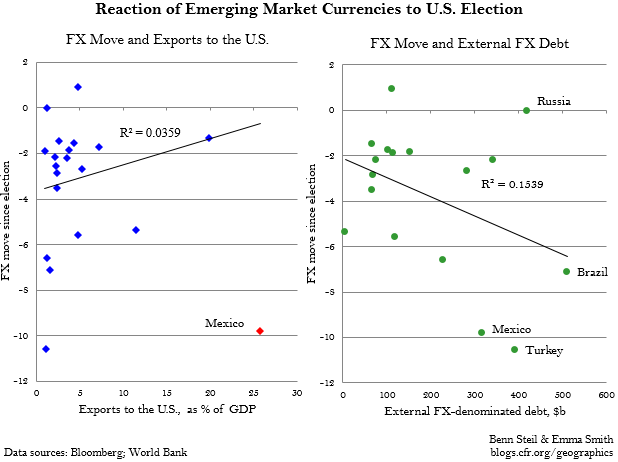 Emerging market (EM) assets have taken a beating since Donald Trump’s surprise election victory on November 8.  EM bond prices are down 4.4 percent, equities 4.6 percent, and currencies 4.1 percent.  But is this really, as the Financial Times proclaimed, about “fears of trade protectionism”?

No.  If Trump’s trade threats were the driver, we would expect a negative relationship between the size of an EM currency’s move and the country’s exports to the United States (as a percentage of GDP).  Instead, as the left-hand figure above shows, that relationship is slightly positive.  Only Mexico, whose trade surplus with the United States was a direct target of Trump’s during the campaign, shows the expected relationship.

So what is the driver?  Expectations of more U.S. government spending, higher interest rates, and a stronger dollar.  Markets now see a steeper path for U.S. rates—three Fed rate hikes are priced in between now and the end of 2017, compared to only one before the election.  This raises the cost of servicing EM dollar-debt.  And as the right-hand figure above shows, there is a positive relationship between the size of an EM currency’s move and the country’s external debt.  Russia is an outlier, as markets expect improved U.S.-Russia relations and relaxation of trade and financial sanctions.

In short, markets do not see Trump igniting a global trade war.  But they do see big challenges ahead for heavily indebted emerging markets.

Written By
Other Writer
More from Other Writer
Hayek brings Popper closer to the Austrians in asserting the limits of...
Read More

0 replies on “Benn Steil: Is the Emerging Market Currency Plunge Really About Trade?”