2016 was supposed to be the year that the Federal Reserve “normalized” its policies. As much as two years ago — after years of a near-zero target rate — the Fed was swearing that it would begin to raise rates back to “normal” levels and cut its balance sheet.

Yes, the Fed has increased its target rate from 0.25 percent to 1 percent over the past 19 months. But if we look at this in context, it would be absurd to declare a target rate of 1 percent as anything other than an easy-money stance. Remember that throughout the 1990s, the Federal Funds rate was usually between 5 percent and 6 percent.

After December 2008, though, the target rate remained at 0.25 percent for seven years. Now that we’re nine years into this “recovery” the Fed is talking about hiking rates, but we’re in a strange world indeed when a 1 percent target rate looks like a central bank “tightening.” 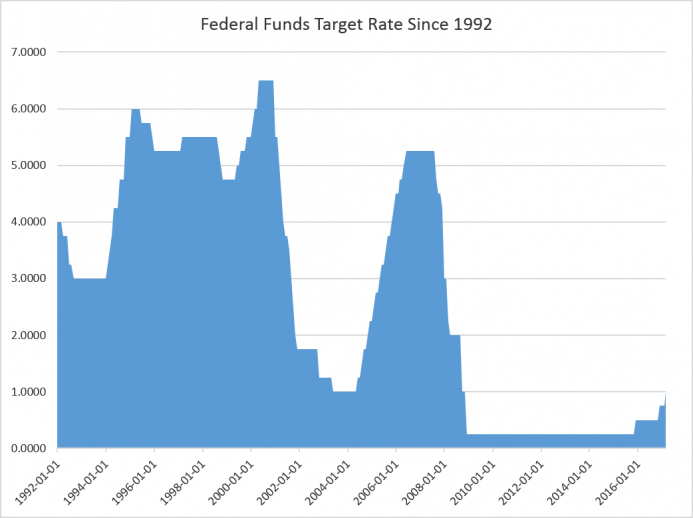 Moreover, we’re still hearing precious little about the Fed normalizing its balance sheet, which remains heavy with assets purchased in the wake of the financial crisis to prop up asset prices.

We keep hearing about how the the economy is showing signs of strength, but nearly a decade after the last financial crisis, central banks — the Fed included — are still treating the economy as if it is extremely fragile and may fracture if upset in the slightest.

This becomes all the more evident when we look at other central banks around the world. 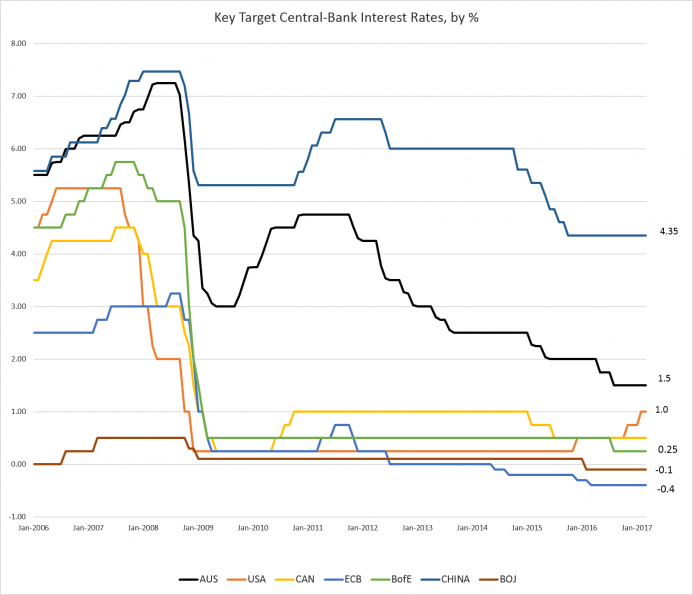 After all, the Fed is the odd man out when it comes to central banks, and is the only major central bank that’s raising rates.

Looking at the central banks of Australia, the EU, Canada, Japan, China, and the UK, we find no tightening at all. Since 2012, with the exception of the Fed, it’s been nothing but cuts in the target rate. Excluding the Fed, the last time we saw central banks move was when the Australian central bank and the Bank of England lowered their target rates in August 2016.

Meanwhile, the European Central Bank and the Bank of Japan continue to sit in negative territory.

The Bank of Japan has been saying it’s going to get serious about shedding its massive balance sheet, though — in the future. Last week, the Bank of Japan’s governor Kuroda said he might even release a report on the impact of unwinding the BOJ’s balance sheet. But talking about scaling back monetary stimulus and actually doing it are two different things.

The balance sheets at the big central banks of the US, EU, and Japan are so big that Bloomberg last month called the balance sheet issue, “the $13 trillion gorilla in the room.” It’s a combined total that’s so huge it’s “greater than either China’s or the euro region’s economy.”

Like Japan, the ECB is doing nothing at all right now, and “any discussion on when to start shrinking [the balance sheet] appears to be some distance away.”

Moreover, the Bank of England left its rock-bottom 0.25 percent rate unchanged and lowered its 2017 forecast. Earlier, the B of E had used Brexit as an excuse to ramp up the stimulus, and in spite of a stabilizing economy, has done nothing since.

And lest anyone think the smaller economies may be doing fine, we find that Moody’s is downgrading Canada’s six largest banks over fears the housing market there is too frothy. The Bank of Canada’s last move was to cut its target rate to 0.5 in 2015.

The cumulative effect of all of this is to drive home, yet again, that the central banks are simply too frozen with fear about the true state of the economy to take any hawkish action on interest rates.

If things are progressing so well, where are the rate hikes of a mere 0.25 percent?

We’re not seeing any, because the banks know that without a constant infusion of easy money, demand would likely collapse, and recession would follow soon after.

But, with the Fed the only major bank tightening rates, the world’s central banks are driving home yet again that we’re in a race to the bottom. Yes, the US is in the midst of an inflationary regime, but the ECB, BOJ, and others appear to have no qualms about keeping their own money spigots wide open. And thus, the dollar, for now, looks not so terrible by comparison.

Written By
Other Writer
More from Other Writer
Source: http://bawerk.net/2015/12/11/how-peak-debt-constrain-the-fed-from-moving-rates-higher/ We have argued for a long time that 2016 will...
Read More