The Federal Reserve (Fed) is widely expected to continue to tighten its monetary policy this year. According to a latest Reuters Poll, the Fed is likely to start shrinking its US$4 trillion balance sheet in September and, moreover, raise further its key interest rate, which is currently standing in a range of 1.0 to 1.25 percent, in the fourth quarter this year.

According to mainstream economic wisdom, the time has come for the US economy to return to a more normal level of interest rates. Industrial output is expanding at a decent clip, official unemployment has declined markedly, and prices in the stock and housing market show a sustained upward drift. Considering these circumstances, the US economy can now shoulder a tighter monetary policy, it is said.

It should be understood, however, that there will be side-effects, even unintended consequences, if and when the Fed hikes interest rates further. Most importantly, the Fed doesn’t know where the “neutral interest rate” is. If it does too much, the economy will collapse. If it does not do enough, it will only prolong the artificial boom, causing ongoing malinvestment and, ultimately, another crisis.

Admittedly, this is nothing new: The Fed has always been a cause of boom and bust. It sets into motion an artificial boom by issuing new fiat money through bank credit expansion. Such a boom, however, must sooner rather than later collapse and turn into a bust. It is, therefore, strongly advised to expect nothing good coming out of Fed interventions.

Going Through the Numbers

This of course holds true for the Fed’s plan to start selling securities it has bought during the financial and economic crisis to prop up the economic and financial system. Back in 2008 and 2009, the Fed provided the US banking system with an enormous cash infusion by granting loans to and purchasing securities from banks.

This, in turn, has reduced banks’ cash holdings to US$ 2,398.2bn. As a result, it has become impossible for the Fed to sell all the bonds it has purchased. Simply put: The US banking system does currently not have enough base money to pay for the Fed’s crisis-related bond purchases of US$3.755.8bn. 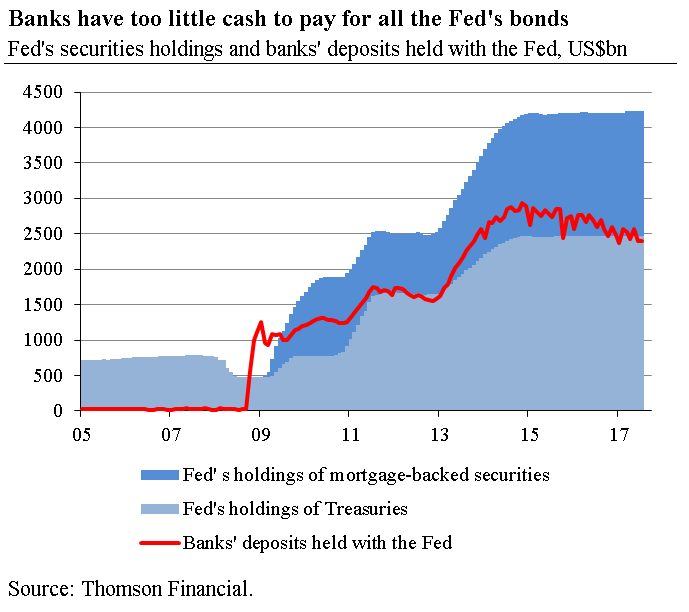 If the Fed were to shed just 64 percent of its current bond holdings, the base money supply in the US banking system would be completely wiped out, making the banking sector effectively illiquid. In this process, US interbank interest rates would presumably spike, sending shock waves through the economic and financial system, not only in the US but worldwide.

It is safe to assume that the Fed and the banks would want to avoid such a scenario. This leaves the Fed with three options. Option 1: The Fed sells only a (small) part of its current Treasury and MBS to avoid a liquidity shortage in the interbank money market. In other words: The Fed would have to keep sitting on a significant part of its bond holdings and buy new bonds once they mature.

Option 2: The Fed sells off its bond holdings and, at the same time, runs liquidity providing operations to keep banks sufficiently equipped with cash. It purchases, for instance, consumer and/or corporate loans from banks issuing new base money. As a result, the Fed’s assets in its balance sheet would see Treasuries and MBS go down, and consumer and corporate loans go up.

Option 3: The Fed swaps its Treasury and MBS holdings into short-term maturities and sells these papers over time, thereby reducing the base money supply in the banking system as far as possible. This way, the Fed would reduce its active involvement in the credit markets somewhat, confining it mainly to the short-term end of the market.

That said, it will be enlightening to see which option the Fed will ultimately choose. Option 1 and 2 would be indicative of the Fed wanting to retain its powerful grip on the price action and consequently the yields in fixed income markets. Option 3, in turn, would suggest that the Fed allows interest rates in the long-term end of the market to normalize at least to some extent.

Whatever option it chooses, however, the Fed will, one way or another, keep distorting interest rates. By issuing new quantities of fiat money through credit expansion, the Fed inevitably wreaks havoc on the economy’s price system. It manipulates the perception of risk and flatters the value of future cash flows.

This, in turn, causes many economic and social problems. Most importantly, the Fed’s actions debase the purchasing power of the US dollar, thereby destroying much of peoples’ life savings. What is more, the Fed’s policy coercively redistributes income and wealth, and it also brings about costly boom and busts.

Just to be on the safe side: The Fed is not the solution to all these problems. It is the actual cause. Whatever the US central bank will do: Be assured it will remain on course to trouble. And trouble there will be – and unfortunately so, whatever the Fed will be doing in terms of setting interest rates and dealing with the bonds it has purchased against issuing new fiat dollars.

While this is certainly a gloomy message, it might help investors to make wise decisions. Because if the Fed causes another round of trouble, it will most likely resort to even lower interest rates and issuing even more fiat money. So whatever happens short-term, there is good reason to expect that the fiat dollar — and this holds true for all fiat currencies — will lose value.

0 replies on “The Fed Remains on Course – to Trouble”