The first part of the title of this Macro Letter is borrowed from an excellent book originally written in 1994. Among several observations made by the author, Jeremy Siegel, was the idea that stocks would at least keep pace with GDP growth or even exceed it at the national level. The data, which went back to the 19th Century, showed that stocks also outperformed bonds in the long-run. The price one has to pay for that outperformance is higher volatility than for bonds and occasional, possibly protracted, periods of under-performance or, if your portfolio is concentrated, the risk of default. This is not to say that bonds are exempt from default risk, notwithstanding the term ‘risk free rate’ which we associate with many government obligations. A diversified portfolio of stocks (and bonds) has been seen as the ideal investment approach ever since Markowitz promulgated the concept of modern portfolio theory.

Today, passive index tracking funds have swallowed a massive percentage of all the investment which flows into the stock market. Why? Because robust empirical data shows that it is almost impossible for active portfolio managers to consistently outperform their benchmark index in the long run once their higher fees have been factored in.

An interesting way of showing how indexation has propelled the stock market higher recently, regardless of valuation, is shown in this chart from Ben Hunt at Epsilon Theory – Three Body Problem. He uses it to show how the factor which is QE has trumped everything in its wake. I’ll allow Ben to explain:-

Here’s the impact of all that gravity on the Quality-of-Companies derivative investment strategy.

The green line below is the S&P 500 index. The white line below is a Quality Index sponsored by Deutsche Bank. They look at 1,000 global large cap companies and evaluate them for return on equity, return on invested capital, and accounting accruals … quantifiable proxies for the most common ways that investors think about quality. Because the goal is to isolate the Quality factor, the index is long in equal amounts the top 20% of measured  companies and short the bottom 20% (so market neutral), and has equal amounts invested long and short in the component sectors of the market (so sector neutral). The chart begins on March 9, 2009, when the Fed launched its first QE program. 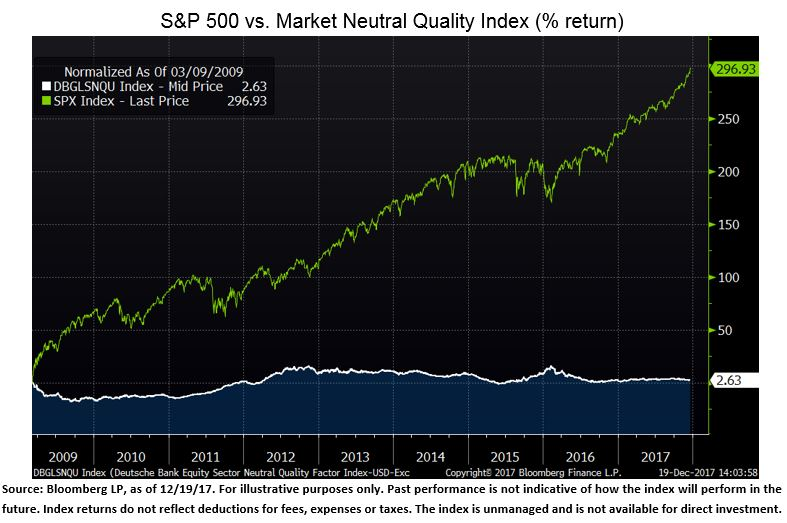 Over the past eight and a half years, Quality has been absolutely useless as an investment derivative. You’ve made a grand total of not quite 3% on your investment, while the S&P 500 is up almost 300%.

Long term there are two strategies which have been shown to consistently improve risk adjusted return from the stock market, momentum (by which I mean trend following) and value (I refer you to Graham and Dodd). Last month the Managed Futures community, consisting primarily of momentum based strategies, had its worst month for 17 years. Value, as the chart above declares, has been out of favour since the great recession at the very least. Indiscriminate Momentum has been the star performer over the same period. The chart below uses a log scale and is adjusted for inflation:- 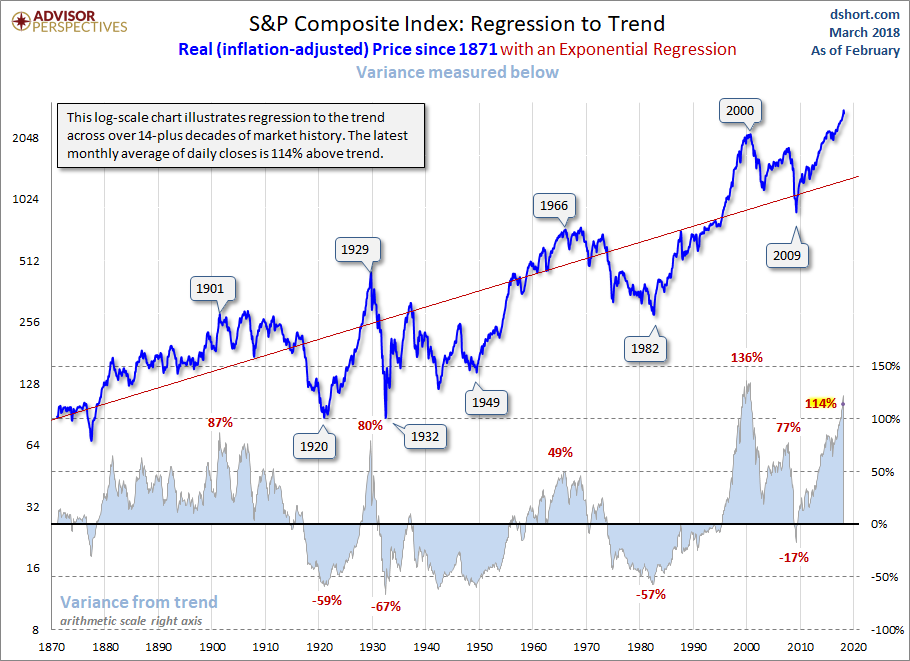 At the current level we are certainly sucking on ether in terms of the variance from trend. If the driver has been QE and QQE then the experiment have been unprecedented; a policy mistake is almost inevitable, as Central Banks endeavour to unwind their egregious largesse.

My good friend, and a former head of bond trading at Bankers Trust, wrote a recent essay on the subject of Federal Reserve policy in the new monetary era. He has kindly consented to allow me to quote some of his poignant observations, he starts by zooming out – the emphasis is mine:-

Recent debates regarding future monetary policy seem to focus on a degree of micro-economic precision no longer reliably available from the monthly data.  Arguments about minor changes in the yield curve or how many tightening moves will occur this year risk ignoring the dramatic adjustments in all major economic policies of the United States, not to mention the plausible array of international responses…

…for the first time since the demise of Bear Stearns, et al; global sovereign bond markets will have to seek out a new assemblage of price-sensitive buyers…

Given that QE was a systematic purchase programme devoid of any judgement about relative or absolute value, the return of the price-sensitive buyer, is an important distinction. The author goes on to question how one can hope to model the current policy mix.

…There is no confident means of modeling the interaction of residual QE, tax reform, fiscal pump-priming, and now aggressive tariffs. This Mnuchin concoction is designed to generate growth exceeding 3%.  If successful, the Fed’s inflation goal will finally be breached in a meaningful way…

…Classical economists will argue that higher global tariffs are contractionary; threatening the recession that boosts adrenaline levels among the passionate yield curve flattening crowd.  But they are also inflationary as they reduce global productivity and bolster input prices…

Contractionary and inflationary, in other words stagflationary. I wonder whether the current bevvy of dovish central bankers will ever switch their focus to price stability at the risk of destroying growth – and the inevitable collapsed in employment that would signify?

Hot on the heels of Wednesday’s rate hike, the author (who wrote the essay last week) goes on to discuss the market fixation with 25bp rate increases – an adage from my early days in the market was, ‘Rates go up by the lift and down by the stairs,’ there is no reason why the Fed shouldn’t be more pre-emptive, except for the damage it might do to their reputation if catastrophe (read recession) ensues. A glance at the 30yr T-Bond chart shows 3.25% as a level of critical support. Pointing to the dwindling of foreign currency reserves of other central banks as the effect of tariffs reduces their trade surplus with the US, not to mention the deficit funding needs of the current administration, Allan concludes:-

…Powell will hopefully resort to his own roots as a pragmatic investment banker rather than try to retool Yellenism.  He will have to be very creative to avoid abrupt shifts in liquidity preference.  I strongly advise a very open mind on Powell monetary policy.  From current levels, a substantial steepening of the yield curve is far more likely than material flattening, as all fiscal indicators point toward market-led higher bond yields.

What we witnessed in the stock market during February was a wake-up call. QE is being reversed in the US and what went up – stocks, bonds and real estate – is bound to come back down. Over the next decade it is unlikely that stocks can deliver the capital appreciation we have witnessed during the previous 10 years.

Whilst global stock market correlations have declined of late they remain high (see the chart below) the value based approach – which, as the Deutsche Bank index shows, has underwhelmed consistently for the past decade – may now offer a defensive alternative to exiting the stock market completely. This does not have to be Long/Short or Equity Market Neutral. One can still find good stocks even when overall market sentiment is dire. 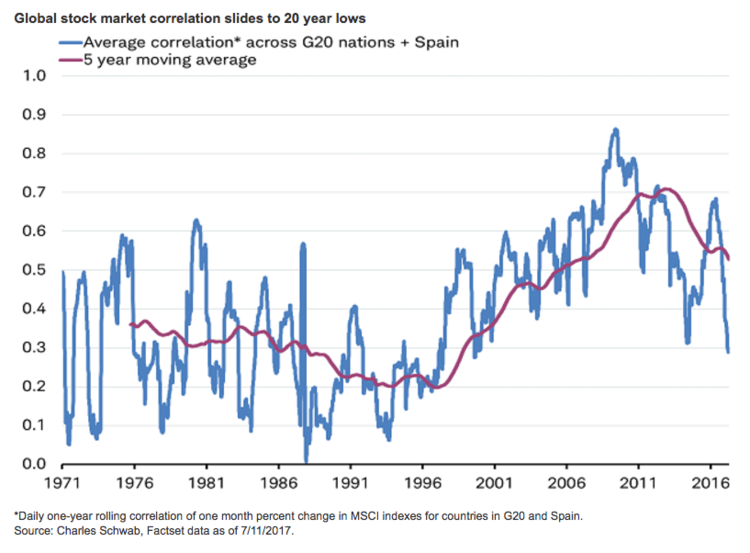 For momentum investors the first problem with stocks is their relatively high correlation. A momentum based strategy may help if there is a dramatic sell-off, but if the markets move sideways, these strategies are liable to haemorrhage via a steady sequence of false signals, selling at the nadir of the trading range and buying at the zenith, as the overall market moves listlessly sideways. Value strategies generally fare better in this environment by purchasing the undervalued and selling the overvalued.

The table below from Star Capital assesses stock indices using a range of metrics, it is sorted by the 10yr CAPE ratio:- 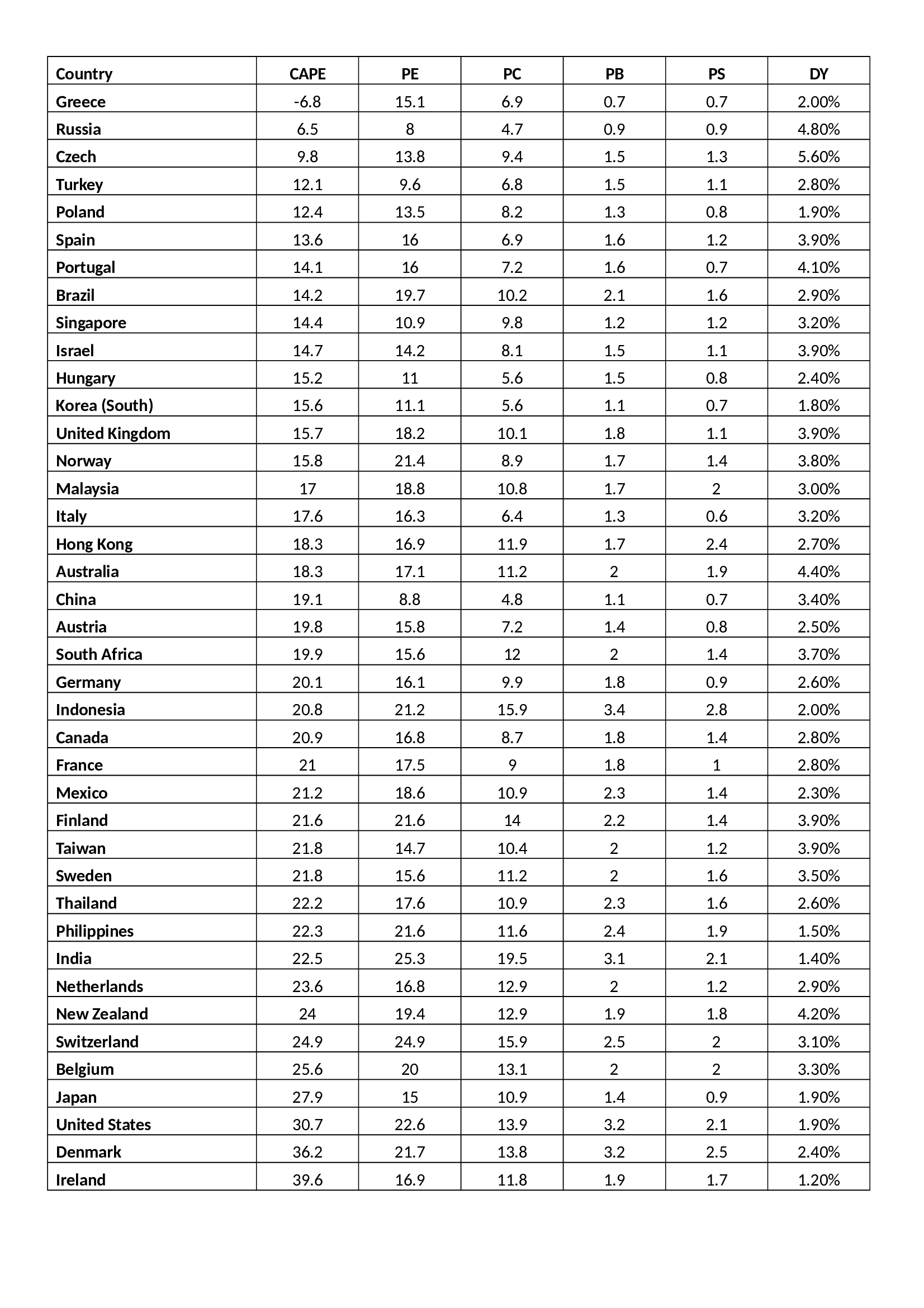 Of course there are weaknesses in using these methodologies even at the index level. The valuation methods applied by Obermatt in the table below may be of greater benefit to the value oriented investor. These are there Top 10 stocks from the S&P500 index by value, they also assess each stock on the basis of growth and safety, creating a composite ‘combined’ evaluation:- 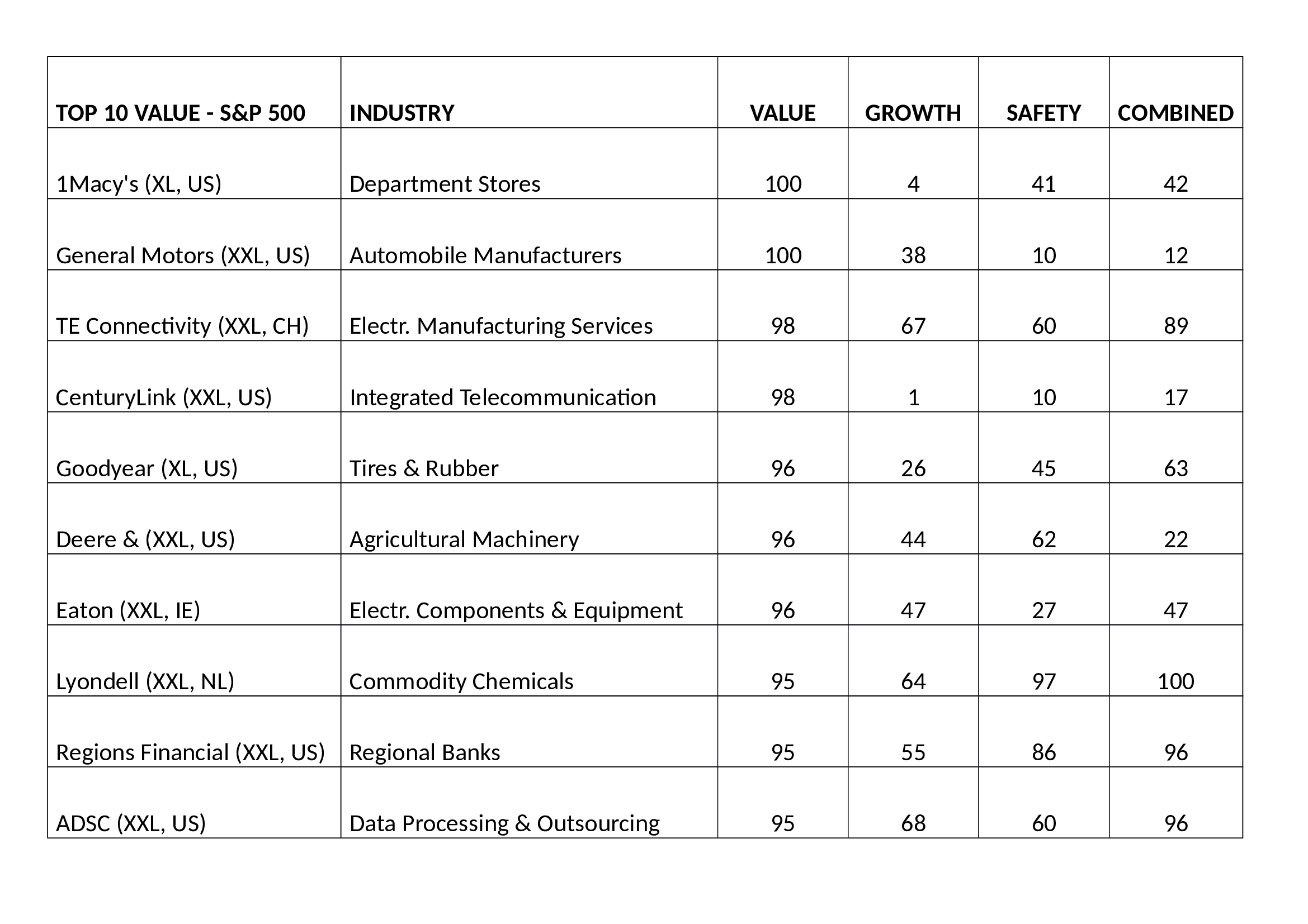 I was asked this week, why I am still not bearish on the stock market? The simple answer is because the market has yet to turn. ‘The market can remain irrational longer than I can remain solvent,’ is one of Keynes more enduring observations. Fundamental valuations suggest that stocks will underperform over the next decade because they are expensive today. This implies that a bear market may be nigh, but it does not guarantee it. Using a very long-term moving average one might not have exited the stock market since the 1980’s, every bear-market since then has been a mere corrective wave.

The amount of political capital tied up in the stock market is unparalleled. In a world or QE, fiat currencies, budget deficits and big government, it seems foolhardy to bite the hand which feeds. Stocks may well suffer from a sharp and substantial correction. Even if they don’t plummet like a stone they are likely to deliver underwhelming returns over the next decade, but I still believe they offer the best value in the long run. A tactical reduction in exposure may be warranted but be prepared to wait for a protracted period gaining little or nothing from your cash. Diversify into other asset classes but remember the degree to which the level of interest rates and liquidity may influence their prices. Unfashionable value investing remains a tempting alternative.