Every 10 years or so there is a banking crisis. We are due. However, the furthest thing from most people’s minds with the Trump boom is a banking/financial crisis, except for a few folks at the Brookings Institution, who just released a paper entitled “Liquidity Crisis in the Mortgage Market.”

You Suk Kim, of the Federal Reserve Board; Steven M. Laufer, who also labors on the Federal Reserve Board along with Karen Pence, plus, Richard Stanton of the University of California, Berkeley, and Nancy Wallace, also of University of California, Berkeley, to give away the punchline from their paper’s abstract, write, “We describe in this paper how nonbank mortgage companies are vulnerable to liquidity pressures in both their loan origination and servicing activities, and we document that this sector in aggregate appears to have minimal resources to bring to bear in a stress scenario.”

John and Joan Q. Public believe the 2018 mortgage business is like George Bailey’s Building & Loan in “It’s a Wonderful Life.” People deposit money, bankers lend it out, keeping the mortgage on their books. Easy Peasy.

As the folks from Brookings point out, it’s not that easy in these dark days of financial engineering. George Bailey’s handshake, promise and maybe a few words on a document to be signed by the borrower which meant simply, “I’ll pay you back,” has become a financial instrument, to be traded and hypothecated by faceless financial bureaucrats, each one taking a sliver of profit off the top.

Everyone remembers the crash of 2008 and plenty explanations have been posited. What the writers for Brookings explain is,

The literature has been largely silent on the liquidity vulnerabilities of the short-term loans that funded nonbank mortgage origination in the pre-crisis period, as well as the liquidity pressures that are typical in mortgage servicing when defaults are high. These vulnerabilities in the mortgage market were also not the focus of regulatory attention in the aftermath of the crisis.

Of particular importance, these liquidity vulnerabilities are still present in 2018, and arguably the potential for liquidity issues associated with mortgage servicing is even greater than pre-financial crisis. These liquidity issues have become more pressing because the nonbank sector is a larger part of the market than it was pre-crisis, especially for loans securitized in pools with guarantees by Ginnie Mae.

George Bailey and his little financial institution are nowhere to be found.

… Today almost two thirds of Ginnie Mae guaranteed securities are issued by independent mortgage banks. And independent mortgage bankers are using some of the most sophisticated financial engineering that this industry has ever seen. We are also seeing greater dependence on credit lines, securitization involving multiple players, and more frequent trading of servicing rights and all of these things have created a new and challenging environment for Ginnie Mae. . . . In other words, the risk is a lot higher and business models of our issuers are a lot more complex. Add in sharply higher annual volumes, and these risks are amplified many times over. . . . Also, we have depended on sheer luck. Luck that the economy does not fall into recession and increase mortgage delinquencies. Luck that our independent mortgage bankers remain able to access their lines of credit. And luck that nothing critical falls through the cracks…

Tozer said these words in 2015. The mortgage engine is built for perfection: a thriving economy, with low interest rates, allowing everyone, from the mortgage borrowers to the credit line providers and securitizers to keep their promises.

However, the world is anything but perfect.

Nonbank mortgage providers essentially borrow short and lend long, using warehouse lines of credit from banks to fund mortgages. From 2012 to the third quarter of 2017, commitments on warehouse lines has increased 70 percent. Of course, if all goes well, a mortgage will be sold quickly into the secondary market (on average 15 days) and the line will be reduced.

The Brookings authors identify three vulnerabilities in the process.

1) margin calls due to aging risk (i.e., the time it takes the nonbank to sell the loans to a mortgage investor and repurchase the collateral) and/or mark-to-market devaluations, 2) roll-over risk and 3) covenant violations leading to cancellation of the lines.

These vulnerabilities are very real, should there be a sudden increase in interest rates or other significant change in the market that causes collateral values to drop. Most nonbank lenders have multiple warehouse lines. However, cross default provisions will trigger a scramble amongst warehouse lenders for a mortgage originator’s assets should it default on one of its lines.

Mortgage servicers have liquidity issues because they are required to continue making payments to investors, tax authorities, and insurers if mortgage borrowers quit making payments. Servicers are eventually reimbursed for these “servicing advances,” however, they need to finance the advances in the interim. 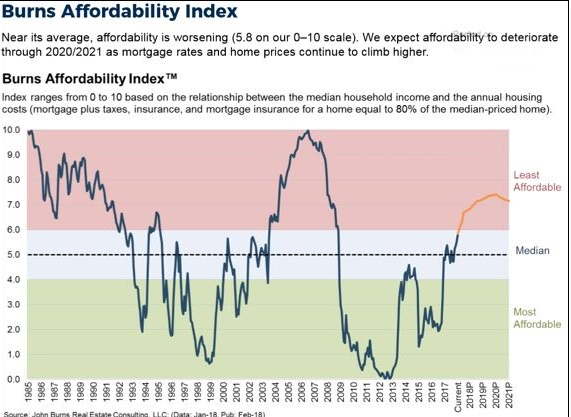 For example, servicers were stressed last year when hurricane victims were allowed payment forbearance by Ginnie Mae and the GSEs. Fortunately, the servicers were geographically diversified enough to manage through the strain.

Again, everything is dandy if borrowers make their payments. However, as Mike “Mish” Shedlock explains,

This is happening while debt-to-income DTI ratios are on the rise (Fannie Mae increased its DTI ceiling from 45 percent to 50 percent last July 29) and median FICO scores are dropping.

This is hardly surprising given homes are not affordable.

The crash clock is ticking.

Douglas French is former president of the Mises Institute, author of Early Speculative Bubbles & Increases in the Money Supply , and author of Walk Away: The Rise and Fall of the Home-Ownership Myth. He received his master’s degree in economics from UNLV, studying under both Professor Murray Rothbard and Professor Hans-Hermann Hoppe. https://mises.org/wire/looming-mortgage-liquidity-crisis

Written By
Other Writer
More from Other Writer
Source: http://bawerk.net/2016/05/19/fed-suppression-long-term-economic-repression/ The Federal Reserve really wants to raise rates, but they do...
Read More