“Mark Zuckerberg is now living out every young person’s worst nightmare: trying to explain how tech stuff works to the nation’s elderly.”

As explicit ‘value’ investors, coming across Tobias Carlisle’s tweet of last week was, on the face of it, shocking. The author of Deep Value, whose Twitter identity is @Greenbackd, posted two intriguing-looking charts, which are shown below: 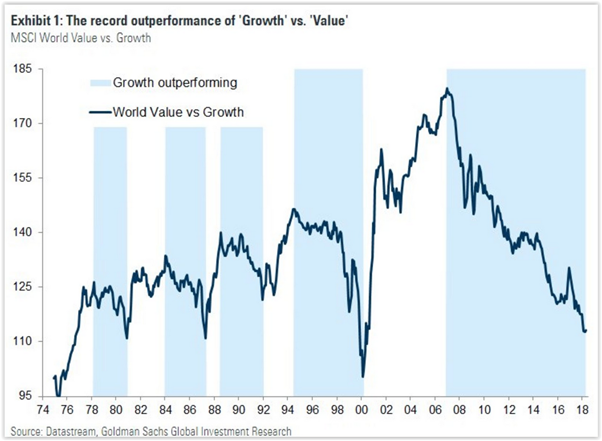 But then the caveats started to bubble up to the surface. Exhibit 1 “clearly” shows the outperformance of ‘Growth’ versus ‘Value’ – but on whose terms ? Well, as defined by index providers MSCI, which has over $3 trillion in assets “managed” according to MSCI World benchmarks. So we started digging a little deeper. In their words,

Those “value style characteristics” turn out to be price / book value; 12-month forward p/e; and dividend yield. Which in and of themselves are not outrageously contentious value characteristics (albeit we would prefer to see a metric that includes a sustained history of superior cash generation). It’s probably also worth clarifying that we prefer to select our global equities on an entirely unconstrained geographic basis freed from the tyranny of any indices, and for us that means potentially including companies that MSCI would overlook on the basis of being insufficiently capitalised on their terms. More to the point, MSCI’s ostensibly “World” Value Index looks suspiciously US-centric – which is understandable, given that the US stock market accounts for nearly 60% of the entire “World” Index. So of MSCI’s World Value Index, the top ten holdings are all US companies.

Nothing massively contentious there either, although we’d likely exclude some of these companies from any screens we conduct, on the basis that they’re banks, and as a result have balance sheets that we would consider utterly impenetrable to their own employees, let alone to outsiders.

But when you then consider which companies feature in MSCI’s World “Growth” Index, up pops Microsoft, again. Microsoft appears to have mastered the spooky ability to be present in multiple dimensions in multiple states simultaneously. Could it be that MSCI’s own index criteria are – how to put it – somewhat less than robust ?

The other top ten components within MSCI’s World Growth Index, incidentally, are:

Which, if it isn’t pure FAANG, is certainly fairly FAANGy.

The fate of the FAANGs in the months to come will be more than usually significant given the lack of breadth in the US market. 13D Research also point out that there is now a dual threat overhanging FAANG-like stocks: increased regulatory oversight of Big Tech, and the reversal of passive and algorithmic strategies linked to low volatility (it would be ironic if the rally in Big Tech was ultimately crushed by Big Tech too – like the Terminators starting a war but beating themselves in the process). 13D’s piece was originally published on 5 April 2018:

FAANG stocks lost $78.7 billion in market value on Monday as the continued barrage of negative tech headlines spooked investors. Yet, the bleeding was not reserved just to the giants targeted by the political and regulatory backlash. As The Wall Street Journal’s Tuesday recap suggests, investors fleeing tech-heavy indexes likely spread the pain: “As the rout intensified, shares of companies ranging from chip makers to electronic-payment providers to biotechnology firms tumbled too, highlighting the indiscriminate selling spreading across the technology industry. Every stock in the S&P 500 technology sector ended lower for the day.”

Throughout the near-decade-long bull run, tech giants and passive and algorithmic investing ascended hand-in-hand. The more a small group of tech companies dominated market returns, the less active investors could outperform tech-heavy indexes. And the more capital herded to passive and quant strategies, the less firm-by-firm price discovery could restrain tech stock inflation. It was a virtual feedback loop and the consequence is historic capital concentration in the tech sector.

Companies in the NYSE FANG+ Index are valued at a multiple that’s almost three times that of the broader gauge, a greater divergence than at the top of the dot-com bubble. According to a Morgan Stanley analysis, “the e-commerce bubble” — which includes FANG plus Twitter and Ebay — has inflated 617% since the financial crisis, making it the third largest bubble of the past 40 years behind only tech in 2000 and U.S. housing in 2008.

Now, the key question is: What would cause tech-heavy passive and quant strategies to unwind and where will capital go when they do? ..To understand the implications of the tech drawdown that could result, it is essential to understand how tech’s bull run sculpted the passive and quant investing revolution.

However, digging deeper into the passive investing universe, the tech overweighting grows even more severe. Almost 10% of all ETF assets under management — or roughly $340 billion — track either growth or value indexes, as Nicholas Colas reported for Bloomberg View last month. These indexes have very concentrated sector and stock holdings. Colas writes:

Now Wes Gray may well be right when he suggests that ‘value’ can get a lot worse before it gets better, but it really depends on what you mean by ‘value’ in the first place. Trying to define an entire strategy and philosophy by using just a handful of snapshot financial metrics is clearly imprecise. Even sectoral biases don’t quite get us there: any type of company can plausibly be considered a ‘value’ opportunity – at the right price. We’re just not convinced that some of the FAANGs, for example, will ever be cheap enough on our terms for us to engage with them with a high degree of confidence of obtaining that elusive “margin of safety”. Perhaps we’re on surer ground by speaking in terms of objectives. Our ‘value’ approach will be successful if a) we and our clients enjoy decent returns when we get it “right”; and also if b) we and our clients don’t suffer too much when we get it “wrong”. Where MSCI’s indices and ETFs fall down is in their implicit assumption that all investors want the same thing from the markets. This is not the case. We highlighted the work of Daniel Bernoulli in last week’s commentary for a very specific reason. We are more concerned with capital preservation and the generation of attractive absolute returns than we are with “beating the market” – especially if “the market” has now become a handful of tech stocks where the water seems to have gone distinctly off the boil.

“Everyone is bullish. Contrarians know that must be bearish. However, everyone has been bullish for a while, yet the S&P 500 rose to a…