In our latest Toward a New World Order, Part III we ended by promising to look closer at investment implications from the political and economic shift we currently find ourselves in; and that story must begin with the dollar. While known to the investing public for years, the Bank of International Settlements (BIS) recently acknowledge that the real risk-off / risk-on metric in global markets is the dollar and nothing else.

In the chart below, which we recreated from an absolute brilliant presentation by Macro Intelligence 2 Partners via RealVision-TV, we see the potential scale of the coming “dollar-problem”.  The dollar moves in cycles as most things. The lower extreme around 84, only broken when Bernanke pushed through QE2, means financial conditions for emerging markets and other commodity producing economies have gotten so out of hand that conventional risk-metrics finally lead investors to pull back. The trigger, as can be seen in the chart, is often policy driven, but the underlying structural imbalance has been building for years, if not decades, prior.

Before we move on it is of utmost importance to understand that many of the dollar liabilities accumulated outside the United States are not backed by actual dollars, but are rather claims to dollar proper. This is the infamous Eurodollar market whereby banks, mostly international European ones, fund various economic activities by issuing claims to dollars, but for which no such dollars exists.  Think of it as another layer of fractional reserve lending on top of fractionally created money in the first place.

When risk metrics stray too far from what is considered prudent, investors start to pull money out from emerging markets, and obviously demand that their investments are paid out in dollars. To comply, international banks scramble to get hold of as many dollars as they can in the shortest time possible in order to fulfil their part of the bargain. The value of the dollar jumps as demand suddenly outstrips supply. Financial conditions in emerging markets tighten significantly and it becomes impossible to fund further expansion. Emerging market banks, with dollar liabilities and LCU assets are particularly vulnerable. The boom turns to bust as the Eurodollar market breaks. If the cycle gets out of hand, as it did from 2008 onwards, banking solvency is not only limited to local emerging market banks, but to the international banking community at large.

Taking a closer look at the previous dollar cycles, as represented by the real broad based dollar index we find that the initial shock pushes the dollar 20 – 25% higher from its low. It then pauses, drops 5% before starting a second leg higher (we outlined this process back in October). This is exactly where we are at now and if history repeats itself, which we believe it will, a new financial crisis is brewing just under the surface as the dollar moves into its second leg. 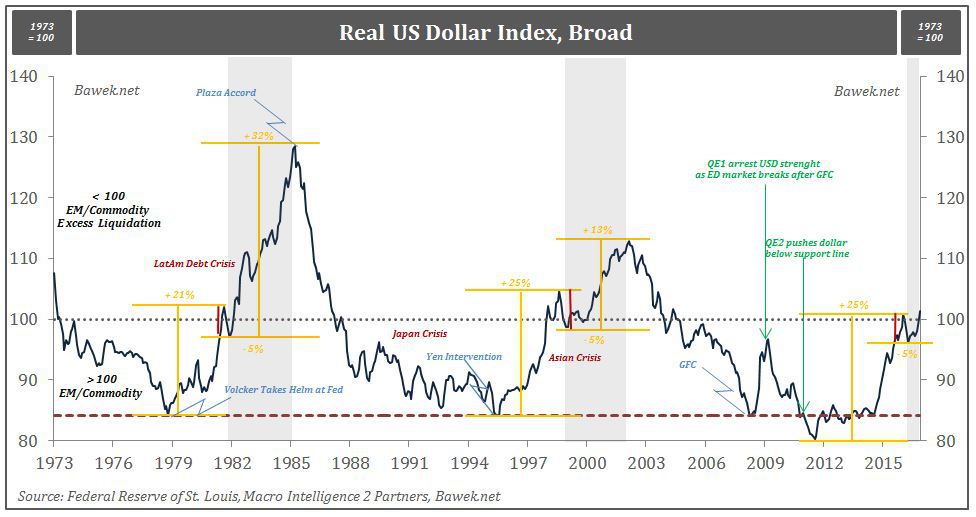 There are also other compelling arguments for the strong dollar case. If President-Elect Trump moves forward with his policy promises, such as changing the tax-system in accordance with the principle of destination based taxation; exports will be tax exempt, while imports will fully taxed at the corporate rate. The dollar may strengthen as much as 10 – 15% on this tax alone. Furthermore, if American companies repatriate some of their trillions held abroad it will put additional pressure on the price of dollars. Some may argue that dollars held in Wall Street are just as fungible as those held in Tokyo, Hong Kong or London, but given new money market regulations that may no longer be the case. Prime funds are starved of cash, while those investing in government bills are flush. It is therefore highly likely that repatriated cash will be stuck in New York money markets and create additional pressure on Eurodollar markets. 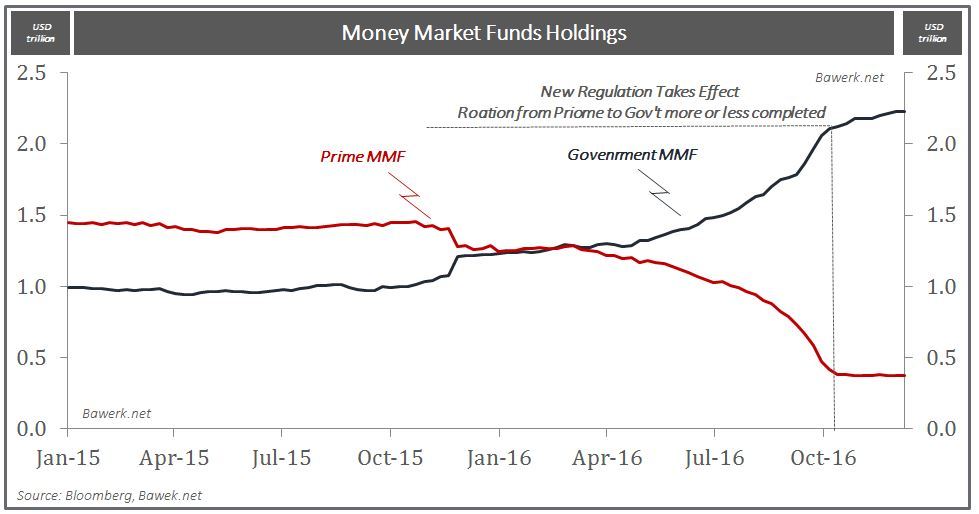 In Toward a New World Order, Part III we showed several structural breaks occurring in US economic time series after 2008. Similar breaks can be found throughout the world. These are all directly related to a broad based funding problem stemming from Eurodollar scarcity and a higher price of the dollar. While dollar-QE interrupted this downward trend intermittently, it was never a solution to the problem, which is one of misallocation of capital and malinvestments. QE only help fund capital consuming economic activities, commonly referred to as bubbles, and as soon as QE injections stop, capital reallocation toward a sustainable economic constellation resumes. QE is thus an extremely destructive policy as it depletes an already stretched pool of real savings available to fund economic projects.

We created a proxy for the state of the Eurodollar by summing up balance sheets of major European banks and what that simple exercise reveals is not a recession and weak recovery, but the ongoing depression that has been so detrimental to Western economies for the last ten years.

Our Eurodollar proxy peaks with the financial crisis, falls rapidly despite QE1 (which was a more technical program designed to fund shadow banks within the US and didn’t really increase the supply of dollars globally), but recovers slightly during QE2 with its focus of pushing dollars into the global system. It is interesting to note how different the proxy reacted to QE3, a program designed just as QE2. 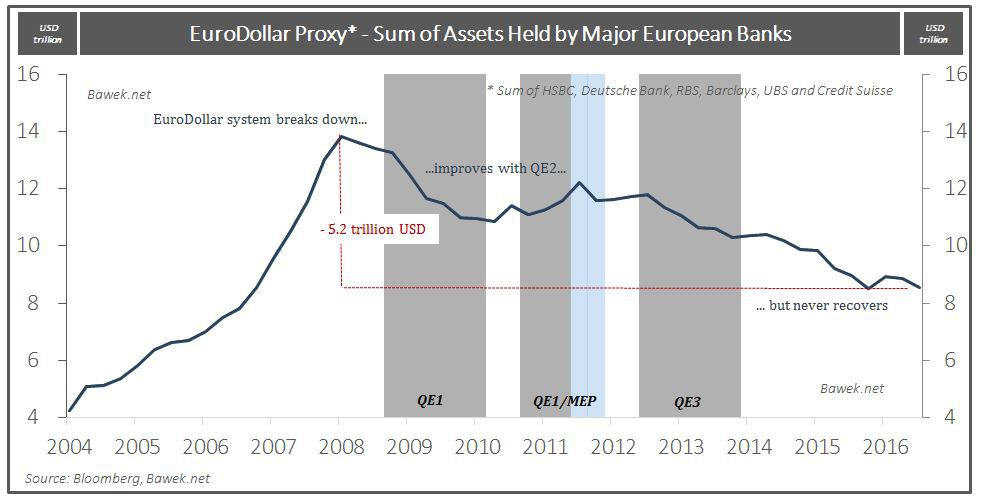 Our proxy showed tentative signs of a global financial system finally able to adjust to the new reality. By late 2015 the Eurodollar market had stabilized. Forced by unforgiving market forces and zealous regulators, banks increased their capital ratios and scaled down. However, just as the system started to cope, our money masters in their infinite stupidity decided they wanted to force banks to re-leverage their balance sheets again in what can only be interpreted as a schizophrenic Leviathan; regulators (often within the central bank itself) told banks to deleverage, while central bank policies tried to make banks leverage. We are of course talking about negative interest rates. By charging banks to hold their excessive reserves at the central banks, the idea was that banks would feel compelled to invest money in the main street economy.

As is now clear to all, maybe with the exception of the Ph.Ds. polluting the world central banking community, negative interest are a deflationary force in itself. Yield curves crashed, net interest margins were squeezed, and with Main Street at peak debt, there have been little appetite for more debt. It has been such an abject failure that the Bank of Japan have more or less admitted their mistake by introducing yield curve control. That step was originally an attempt to steepen the yield curve, but has since backfired spectacularly as the JGB 10-yr rushed through the zero percent level with the election of Donald J. Trump for the US Presidency. Now they are forced to put a lid on JGBs in order to maintain the zero target.

Lastly, if the US current account deficit shrinks, as tariffs and arm-twisting make US Inc. think twice about moving production abroad or even re-shoring some of their existing capacity and a resurgent shale oil industry increase oil production on back of OPEC jawboning, the global dollar supply / demand imbalance will only be aggravated.

In 2017 we expect the dollar to gain another 10 – 20%. This will create immense pressure in several emerging markets such as Turkey, South Africa, Indonesia, Brazil and India. While they have managed to reduce their current account deficits considerably, large amounts of dollar denominated liabilities need to be rolled over in 2017. The US, which currently experiences a mini-boom on the anticipation of Trump policies on top of large dollops government spending prior to the election, will head into recession as the Trump-amplifier turns out to be a dud. Deflation expectations re-emerge to the great surprise of most pundits, but a US led deflation will be nothing compared to what the inevitable Yuan devaluation (or stronger pace of depreciation) will create; in this respect, the German economy, with its heavy reliance on capital goods exports, looks particular vulnerable.

We expect gold to fall below USD1.000 per ounce (which will be a great buying opportunity). 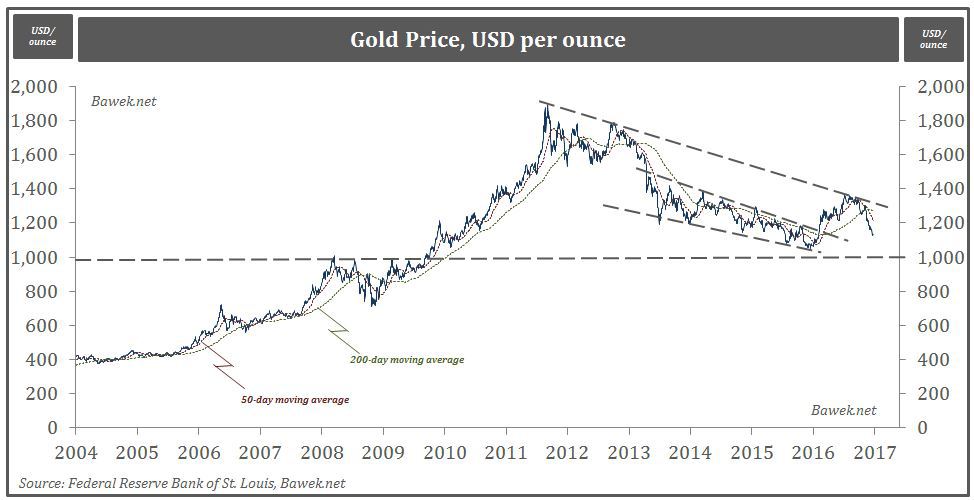 Crude oil will probably fall into the low USD20s per barrel as the OPEC-deal fails to materialize and demand projections prove too optimistic. If OPEC fully comply with the announced deal inventories will start falling in Q1 2017 and provide data oil traders will justify further bullishness. In other words, short term, crude may move higher on OPEC and Trump, but in the medium term it is highly likely the glut will persist and pull the rug under all the bullish bets out there. 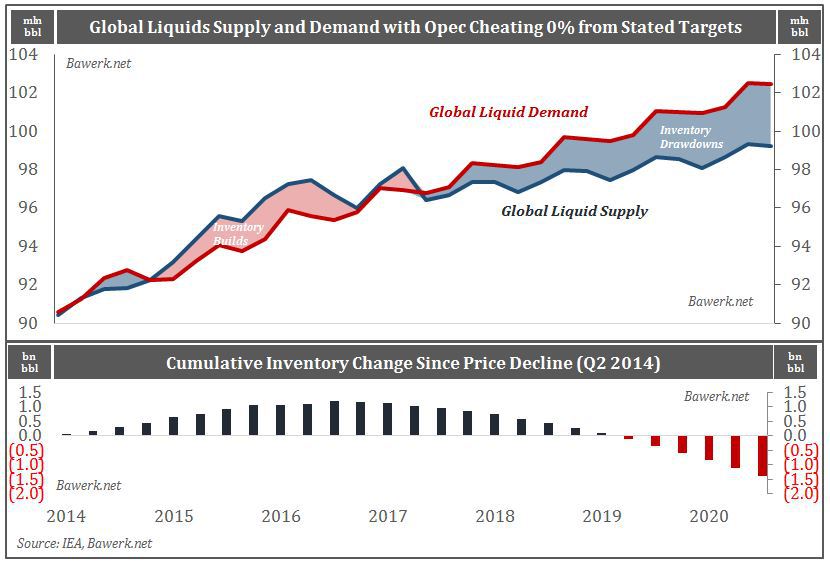 However, if OPEC cheats only 5% from the announced deal the first inventory drawdown will be postponed one year, and the cumulative inventory overhang will persist well into the 2020s. 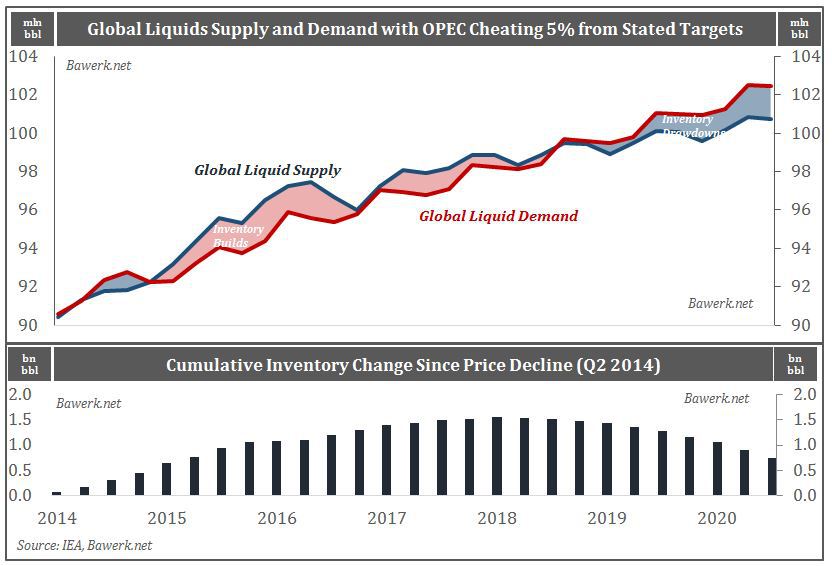 Yield steepeners are in vogue today, but if the dollar thesis plays out as expected, you should load up on cheap yield flatteners in the “safe havens”.

The most important and interesting question though is this; what will the Fed do when they realize that their hiking cycle triggers the global risk-off trade? QE4? At that point everything we just said changes. QE4 will probably be the sign that velocity is about to take off and create the dreaded deflation-inflation whip-saw we expect over the longer term.

Written By
Other Writer
More from Other Writer
Source: https://en.irefeurope.org/publications/online-articles/article/whats-right-and-whats-wrong-about-the-expression-britaly/ written by Sergio Beraldo According to The Economist, these turbulent times...
Read More

0 replies on “Bawerk.net: How to Invest in the New World Order”