Physicists say that the universe is expanding. However, they hotly debate (pun intended) if the rate of expansion is sufficient to overcome gravity—called escape velocity. It may seem like an arcane topic, but the consequences are dire. If the rate of expansion is too low, then it will get slower and slower until expansion stops entirely, then begin collapsing again in a Big Crunch. That’s bad enough. But the other possible fate of the universe is even worse. If the expansion is fast enough, then the universe will keep expanding forever. Things will get colder and colder, which is the heat death.

Our monetary system is based on an irredeemable currency which is backed by debt. Debt at all levels has been growing for decades. This leads to the existential question of the economics universe. Will credit continue to grow, and with it the economy? Or will some law of economics slow and stop it? Is a heat death in our future?

For a process or system to be sustainable, it means that there is no reason why it cannot continue indefinitely (well at least until the sun goes red giant and engulfs the Earth…) Are the economy and monetary system sustainable?

This ought to be a similarly vigorous controversy in economics as in physics.

Let’s look deeper. To service their debts, every debtor must generate income. If they fail to pay at least the interest when due, then they begin to default and the creditors suffer losses. This impairs their capacity and appetite to lend to others, which suffocates other businesses who need capital. More and more businesses have reduced income, and default.

They key to sustaining credit growth is that debtors generate enough income to pay the interest. I would add on top of that they ought to amortize the principal too.

Heat death is a pretty good analogy. Physicists are not interested in just one object, say a NASA probe chilling down near absolute zero as it leaves the solar system. They are looking at the universe as a whole, including all stars and all planets.

Similarly, economists should not look at just one business, say a maker of obsolete mobile phones that can only do voice calls. Of course that company will shut down. That is not under question. But can it happen to the entire economy? Can the entire monetary system fail?

So far, we have seen that income (i.e. net income after expenses) must exceed debt service. And perhaps it should income should support debt amortization too.

As an aside, the Bank for International Settlements defines a zombie firm basically as one whose profits cannot service its debts. They published a graph showing the growth of zombies over the past decade. The graph ends in 2015. The sharply-rising trend had hit about 10.5 percent. This is not good.

3 Zombie firms are defined as listed firms with a ratio of earnings before interest and taxes to interest expenses below one, with the firm aged 10 years or more. Shown is the median share across AU, BE, CA, CH, DE, DK, ES, FR, GB, IT, JP, NL, SE and US.

Measuring and projecting income and debt service decades into the future, would be quite a challenge. Just like measuring the velocities and distances of all objects in the universe.

Fortunately, we can look at something much easier: the change in income and debt service. The variable we want to measure is called marginal productivity of debt. MPoD, as I will call it here for brevity, is a measure of how much new GDP is added for each freshly borrowed dollar.

Here is a graph of MPoD: 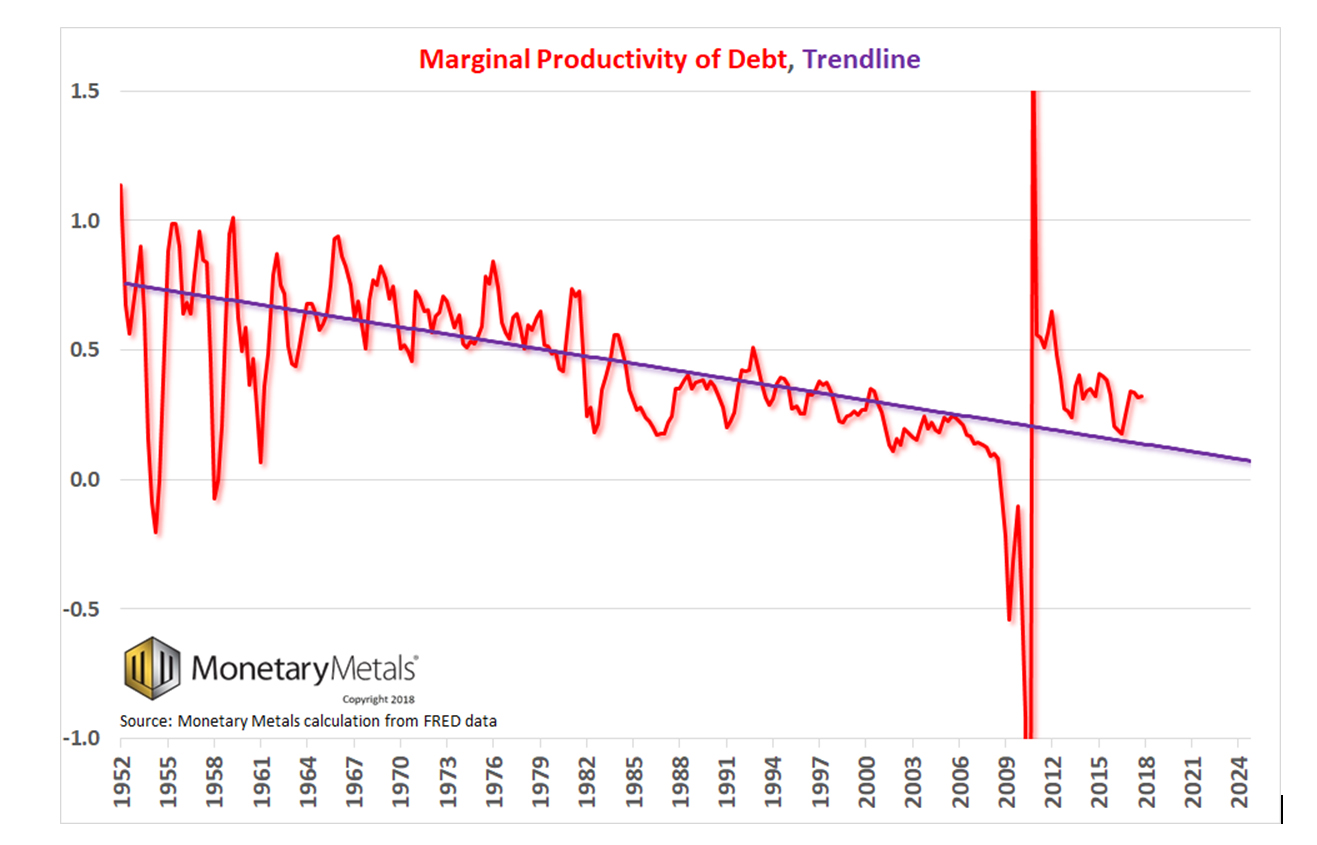 Aside from the anomaly when MPoD moved up sharply in the wake of the great financial crisis (which I discussed here), it is an unmistakable falling trend. Post 2010, it is falling again from that higher level. This trend spans many decades, and it is no fluke.

A falling MPoD means we get less and less GDP for each newly-borrowed dollar. Or conversely, we have to borrow more and more dollars to get a dollar of GDP. This is the key, as growth in net income can be no greater than growth in GDP. This graph is saying that the income to debt ratio is falling.

Normally, debt service would grow proportionally with debt. That is, if the debt doubles, then the interest expense also doubles. However, things are not normal. Thanks to central banks, we have had 37 years of falling interest rates so far (with corrections along the way, such as presently).

Falling interest might seem to have the potential to save the day. At 1% interest, the same debt has a lower monthly payment than at 10%. This is why many economists say there is no problem. They say that debt service today is not a greater percentage of GDP than it was decades ago.

Maybe. But their argument is flawed. Sustaining debt service depends on a falling interest rate. But falling interest is, itself, not sustainable. Here is another good analogy to physics. Physics asks what happens at a temperature of zero. Literally nothing happens. Motion stops on even a molecular level.

Economists should ask what happens at an interest rate of zero percent. When businesses can borrow at zero, obviously, the cost of debt service goes to zero (not including amortization of the principal). What’s not so obvious is that businesses can finance activities that produce no economic value.

Normally, businesses seek to engage in wealth-generating activities. Zero interest would seem to free them of this constraint. Zero interest allows them to stagnate, which is no real goal.

And zero interest is not sustainable anyway. Assuming that some amount of amortization is required, then the debt service becomes unbearable as debt outgrows income. The interest rate must keep falling. It will inevitably go negative (as it has in Switzerland, Japan, and other countries).

If businesses can borrow below zero, that is pay back less than they borrow, they can engage in capital-destroying activities.

For example, suppose an enterprise destroys its investors’ capital at 1% per year. That’s bad. It should go out of business as quickly as possible. Its remaining capital and its employees should be reallocated to companies that generate profits.

But if it can borrow capital at -2%, then the business nets +1%. Positive one percent. Its positive return comes by consuming its investors’ capital. At negative rates, investors lose a bit of their capital every year. They are subsidizing the businesses, which destroys it bit by bit every year.

What is profitable to do, enterprises will do at large scale, across the entire economic universe. They will continue until rates rise above zero, or until all consumable capital is consumed.

So now I can write an economic law:

If MPoD < 1, the economic universe is moving towards its heat death

Note that MPoD was under 1 even as long ago as the 1950’s (I suspect this pathology began either around the time of President Roosevelt’s gold confiscation in 1933, or the creation of the Federal Reserve in 1913). Prior to the crisis of 2008, MPoD had fallen below 0.1. Today, after the post-crisis jump up, marginal productivity of debt was 0.32 at the end of 2017—debt is growing three times faster than GDP.

If any economist wants to step forward and argue that marginal productivity of debt will reverse its decades-long trend and begin to rise, then that would at least be an argument against the coming heat death.

If not, then we must face the truth that the problem with the debt-based dollar system is intractable. And then it is time for gold to enter the mainstream monetary discussion.

The virtue of the gold standard is not constant prices, which is neither possible nor desirable. Its virtue is a stable interest rate and MPoD. With gold, if you don’t like the interest rate you can take your gold coin home. This forces the interest rate to tick up. The time preference of the saver has real teeth.

A gold standard is a free market in money and credit. Left free, people choose gold. They always have. It is about gold in the hands of the people, by right. A working gold standard is when anyone who wants to, can deposit his gold and earn interest on it.

This is my radical and simple vision for how we reverse the destructive trends of the dollar. We must bring back the gold interest rate. There is no other path forward to the gold standard.

Disclosure: my company Monetary Metals has begun this process. We pay investors interest on gold.

Written By
Keith Weiner
More from Keith Weiner
On January 6, we wrote the Surest Way to Overthrow Capitalism. We said:...
Read More

0 replies on “The Heat Death of the Economic Universe”