“China’s HNA Group said on Wednesday that Wang Jian, 57, the group’s chairman and co-founder, accidentally fell and died from his injuries during a business trip in France.

“The company said the death occurred on Tuesday, but didn’t provide further details.

“One of China’s most acquisitive companies, HNA has been under heavy financial and regulatory pressure since last year due to its heavy debt load.”

The world of economics is indebted to JK Galbraith, author of The Great Crash 1929, for his coinage, the bezzle.

To the economist embezzlement is the most interesting of crimes. Alone among the various forms of larceny it has a time parameter. Weeks, months, or years may elapse between the commission of the crime and its discovery. (This is a period, incidentally, when the embezzler has his gain and the man who has been embezzled, oddly enough, feels no loss. There is a net increase in psychic wealth.) At any given time there exists an inventory of undiscovered embezzlement in – or more precisely not in – the country’s businesses and banks. This inventory – it should perhaps be called the bezzle – amounts at any moment to many millions of dollars. It also varies in size with the business cycle. In good times people are relaxed, trusting, and money is plentiful. But even though money is plentiful, there are always many people who need more. Under these circumstances the rate of embezzlement grows, the rate of discovery falls off, and the bezzle increases rapidly. In depression all this is reversed. Money is watched with a narrow, suspicious eye. The man who handles it is assumed to be dishonest until he proves himself otherwise. Audits are penetrating and meticulous. Commercial morality is enormously improved. The bezzle shrinks.

Ivar Kreuger, the so-called “Match King”, was a Swedish financier who founded the construction company Kreuger & Toll in 1908. Kreuger was also a fraudster described by JK Galbraith as the “Leonardo of larcenists”; Price Waterhouse described the statements accounting for his financial empire as follows:

The manipulations were so childish that anyone with but a rudimentary knowledge of bookkeeping could see the books were falsified.

..on Saturday, 12 March, 1932, Ivar Kreuger shot himself dead in his Paris apartment at eleven o’clock in the morning local time. This was six hours before the New York Stock Exchange closed. With the cooperation of the Paris police, the news was withheld until the market closed.. In the case of Kreuger, it should be added, the security system of the Paris police was less than perfect. It is fairly certain that there was heavy selling that morning – including heavy short selling – of Kreuger & Toll by continental interests..

It may be premature to assume that Wang Jian’s death last week may not have been entirely accidental, but there are markets that have a solid reputation for corporate governance and ‘lack of bezzle’, and China doesn’t happen to be one of them. As a Hong Kong fund manager suggested to us a couple of years ago, if there are 1.4 billion people in China, it may be fair to assume that 1 billion of them are crooks.

Lack of adequate corporate governance is one reason why we don’t currently invest in China, but the (over-)valuation argument against investing there is even more compelling. 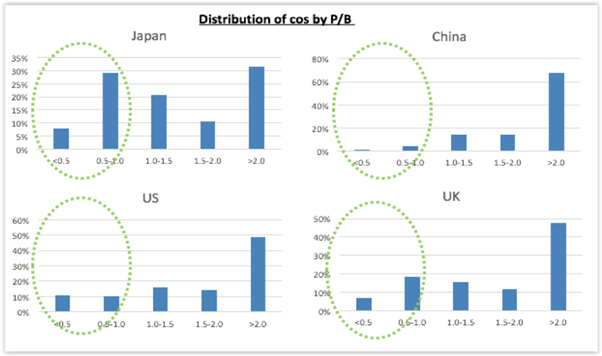 The charts above show the distribution of companies by their price / book ratio, across Japan, China, the US and the UK respectively. Note that over a third of the Japanese stock market, for example, trades on a price / book ratio of less than 1. Note that in China, conversely, there are hardly any companies so inexpensively priced. A chart of the distribution of p/e ratios in each market – shown below – tells a similar story. Whereas Japan again looks outstandingly cheap, China simply does not. 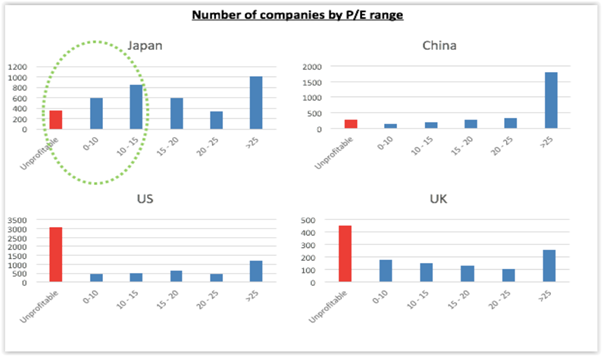 At this point western investors typically attempt to ascend the moral high ground by noting that the Chinese authorities are continually intervening in their stock (and currency) market. Unfortunately, this relativistic argument, like the ill-fated Wang Jian, quickly falls down, given that all major G7 administrations have been interfering in their own capital markets for the past decade, through the disruptive – though asset price inflationary – financial magic of QE and ZIRP.

If one acknowledges that central bank stimulus has artificially inflated the prices of most equities, bonds and real estate, it makes pragmatic sense (to us, at least) to favour those investments that optically, at least, display the characteristics of a lack of tangible overvaluation. Given that QE and ZIRP have been global phenomena, it is hardly surprising that conspicuous undervaluation is somewhat thin on the ground. But it can be located, provided that one looks beyond the constituents of the (widely owned) major indices for it.

Easy money has a tendency to trigger what will, after the fall, become known as malinvestments. Ultra-low interest rates combined with strong upwards price momentum can become a heady cocktail. In Warren Buffett’s words, nothing sedates rationality like large doses of effortless money. Could the highly valued concept stock Tesla, for example, end up as one of the higher-profile casualties ? Twitter users may enjoy the running commentary provided by @TeslaCharts, proudly “Charting the poster child of ZIRP absurdity”.

Should the American economy ever achieve permanent full employment and prosperity, firms should look well to their auditors. One of the uses of depression is the exposure of what auditors fail to find. Bagehot once observed: ‘Every great crisis reveals the excessive speculations of many houses which no one before suspected.’

Or as Warren Buffett more colourfully put it, it’s only once the tide goes out that you discover who’s been swimming naked. The stock market rally since early 2009 has been a wonder to behold, but what were tailwinds a decade ago (most notably the forces of QE) are turning into headwinds now (most notably QT, or Quantitative Tightening). US interest rates have started to rise, and the prospect of a fully-blown global trade war is not conducive to boosting valuations. It is certainly not helping Chinese stocks, whether those companies happen to be cooking their books, or not. There now seem to be a lot of ungenerously clad bathers out there, and we suspect that the tide is on the turn.

On multiple fronts there appears to have been a resumption of hostilities in the global currency wars. A subtle indication of this is the…