According to the US President, the Chinese are an official currency manipulator. Given that they have never relaxed their exchange controls, one must regard Trump’s statement as rhetoric or ignorance. One hopes it is the former.

Sino-US relations have now moved into a new phase, however, on August 5th, after another round of abortive trade discussions, the US Treasury officially designated China a currency manipulator too. This was the first such outburst from the US Treasury in 25 years. One has to question their motivation, as recently as last year the PBoC was intervening to stem the fall in their currency against the US$, hardly an uncharitable act towards the American people. As the Economist – The Trump administration labels China a currency manipulator – described the situation earlier this month (the emphasis is mine): –

After the Trump administration’s announcement of tariffs on August 1st added extra pressure towards devaluation, it seems that the PBOC chose to let market forces work. The policymaker most obviously intervening to push the yuan down against the dollar is Mr Trump himself.

China does not meet the IMF definition of a ‘currency manipulator’ but the US Treasury position is more nuanced. CFR – Is China Manipulating Its Currency? Explains, although they do not see much advantage to the US: –

Legally speaking, the issue of whether China meets the standard for manipulation set out in U.S. law is complex. The 2015 Trade Enforcement Act sets out three criteria a country must meet to be tagged a manipulator: a bilateral surplus with the United States, an overall current account surplus, and one-sided intervention in the foreign-exchange market to suppress the value of its currency. The Treasury Department’s most recent report [PDF] concluded that China only met the bilateral surplus criterion.

But the 1988 Omnibus Foreign Trade and Competiveness Act [PDF] has a different definition of manipulation, saying it can emerge either from action to “[impede] effective balance of payments adjustments” or action to “[gain an] unfair competitive advantage in international trade.” The United States is likely to argue that the recent depreciation was intended to give Chinese exports an edge. China would counter that it has no obligation to resist market pressures pushing the yuan down when the United States implements tariffs that hurt China’s exports.

In the past (2003-2013) China has intervened aggressively to stem the rise of its currency, since then it has intervened in the opposite direction, to the benefit of the US. Earlier this month it briefly appeared to withdrawn from the foreign exchange market, allowing the markets to set their own level based on perceptions of risk. As the Peterson Institute – Trump’s Attack on China’s Currency Policy – puts it: –

This depreciation is due to market forces: Trump’s tariffs push the dollar up against all currencies, the Chinese currency weakens as a result of the trade hit, and China will undoubtedly lower its interest rates to counter that slowdown. There is no evidence that China has sold renminbi for dollars to overtly push its exchange rate down.

Since the inflammatory pop above 7 Yuan to the US$, China has sought to calm frayed nerves, indicating that it wishes to maintain the US$ exchange rate at around current levels: nonetheless, a pre-US election sabre has been rattled.

Speculation about the next move by the Trump administration is, as always, rife, but the consensus suggests the ‘currency manipulator’ label may be used to justify an escalation of US tariffs on Chinese goods. In this new scenario, every tariff increase by the US, will precipitate a decline in the Yuan; it will be a zero-sum game, except for the US importer who will have to foot the bill for the tariffs or pass them on to the consumer. Either a weaker Yuan will mitigate their effect or the tariffs will bite, leading to either a slowdown in consumption or higher prices, or possibly both.

Barring a weaker Yuan, this sequence of events could also threaten the independence of the Federal Reserve. The central bank will be torn between the opposing policies required to meet the dual mandate of price stability and full employment. In the worst case, prices will be rise as employment falls.

Current estimates of the increased cost of tariffs to the US economy are in the region of 10%, yet during the past year the Yuan has already declined from 6.3 to 7 (11%). As the chart below shows, a move back towards 8 Yuan to the US$ cannot be ruled out, enough to significantly eclipse the impact of US tariffs to date: – 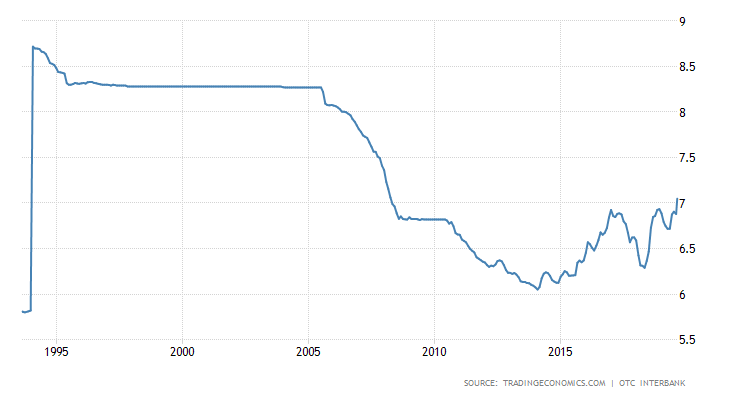 In the run-up to the November 2020 presidential election, US foreign policy towards China is likely to remain confrontational. China, as always, has the ability to play the long game, although the political tensions evident in Hong Kong may highjack even their gradualist agenda. Either way, the Yuan is liable to weaken, pressurising other Asian currencies to follow suit. The US$ may appear relatively strong of late but, as the chart below shows, it is more than 50% below its 1980’s peak: – 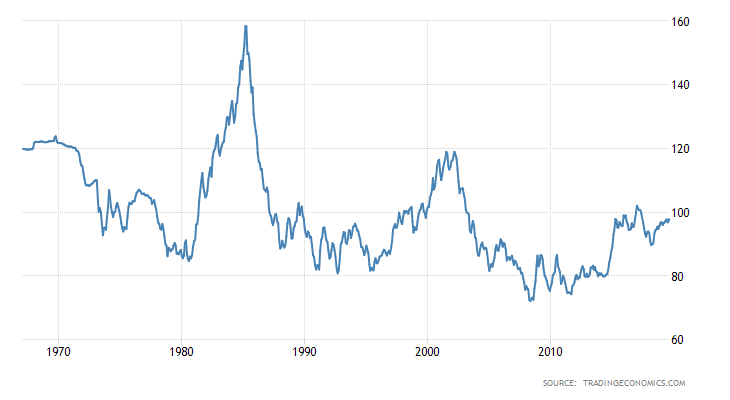 The US bond yield curve has been steadily inverting, a harbinger, some say, of a recession. The other interpretation is that US official rates are much too high. Relative to other developed nations US Treasury yields certainly offer value. I expect the Fed to cut rates and, if inflation rises above the 2% level, expect them to point to tariff increases as a one-off inflation effect. They will choose to target full-employment over price stability.

Barring a catastrophe in Hong Kong, followed a US military response (neither of which can be entirely ruled out) any risk-off weakening of stocks, offers a buying opportunity. Further down the road, when US 10yr bond yields turn negative, stocks will trade on significantly higher multiples.

I speak to the excellent Professor David Howden about the future of the euro, how Cyprus changed everything, and what’s happening in Iceland… Episode…