My title is the first part of JM Keynes famous remark, ‘When the facts change, I change my mind.’ This phrase has been nagging at my conscience ever since the Coronavirus epidemic began to engulf China and send shockwaves around the world. From an investment perspective, have the facts changed? Financial markets have certainly behaved in a predictable manner. Government bonds rallied and stocks declined. Then the market caught its breath and stocks recovered. There have, of course been exceptions, while the S&P 500 has made new highs, those companies and sectors most likely to be effected by the viral outbreak have been hardest hit.

Much has happened since, yet, in my conclusion, I stated: –

…the facts always change but, unless the Covid-19 pandemic should escalate dramatically, the broad investment themes appear largely unchanged. Central banks still weld awesome power to drive asset prices, although this increasingly fails to feed through to the real economy.

… Like an addictive drug, the more the monetary stimulus, the more the patient needs in order to achieve the same high. The direct financial effect of lower interest rates is a lowering of bond yields; lower yields spur capital flows into higher yielding credit instruments and equities. However, low rates also signal an official fear of recession, this in turn prompts a reticence to lend on the part of banking intermediaries, the real-economy remains cut off from the credit fix it needs. Asset prices keep rising, economic growth keeps stalling; the rich get richer and the poor get deeper into debt. Breaking the market addiction to cheap credit is key to unravelling this colossal misallocation of resources, a trend which has been in train since the 1980’s, if not before. The prospect of reserving course on subsidised credit is politically unpalatable, asset owners, especially indebted ones, will suffer greatly if interest rates should rise, they will vote accordingly. The alternative is more of the same profligate policy mix which has suspended reality for the past decade. From an investment perspective, the facts have not yet changed and I have yet to change my mind.

To judge by the current level of the Nasdaq 100 (current level 9,683 as at COB 03-06-2020, just 1.6% below its all-time high) the unprecedented crisis has been met by an equally unprecedented policy response. The S&P 500 has lagged the Nasdaq somewhat and the MSCI World Index still more: – 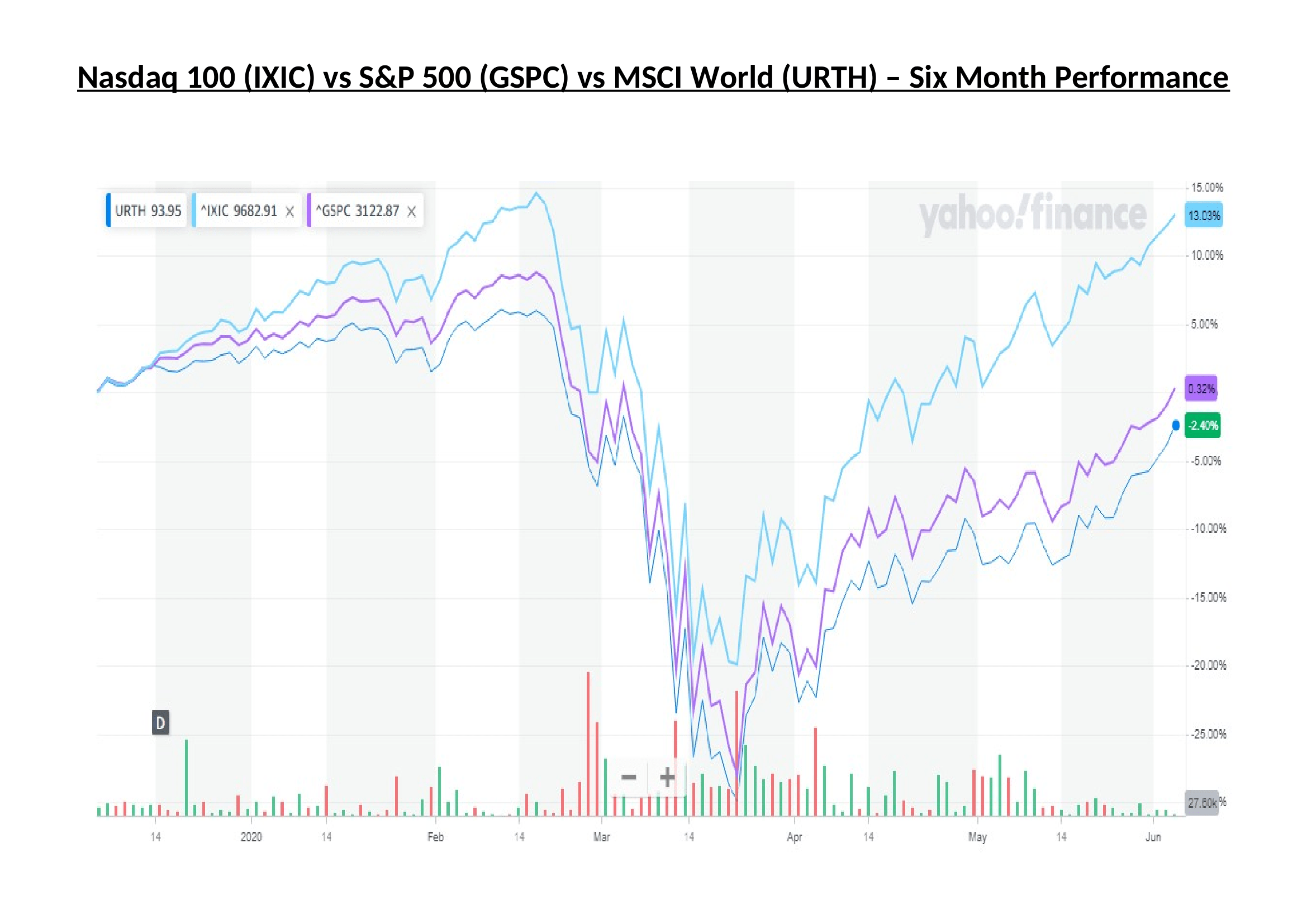 Returning to my letter from February, the facts have changed, governments and central bankers have responded to a crisis, a crisis which proved far worse than anticipated. The stock market collapsed, but has now regained composure, nevertheless, the main driver of stock market performance for more than a decade – ability of central banks to lower interest rates – has been exhausted. The central bankers’ armoury is not quiet empty, however, they still have the QE bazooka which can be aimed at corporate bonds and even common stocks, but, not wishing to exceed their mandates they have turned to their respective governments’ for guidance and succour.

Governments’ can and have responded to the pandemic in a manner which is both broader and more direct in its impact on the economy and businesses. Going forward the effect of government largesse will be felt in a less consistent manner than the largesse of central banks. For governments’ employment will take precedence over corporate profits, corporate executives would be wise to recognise the profound change in the terms of engagement. Stock performance can no longer be assured by increasing debt to repurchase stock. Mergers which rely on rationalisation will be thwarted from above. Wages are unlikely to rise given the increase in unemployment, but the cost of making incumbent employees redundant will have adverse consequences both seen and unseen. Firms that hire will find favour, those that trim payrolls will not.

We will witness the return of the Value Investor, an endangered species who underperformed the Index Trackers during the decade since the great financial crisis. The great rotation away from index tracking or hugging is about to begin. Technology will continue to provide new employment opportunities even as more roles in the wider economy become automated. The public sector will create opportunities. Infrastructure spending is set to bring a ‘New, new deal’ to those in need of work. Healthcare will continue to expand as the population of developed countries age and life expectancy increases.

Other changes are also afoot. Working from home is about to become the norm for many people. Video conferencing, now widely adopted, brings into question the need for excessive travel. Demand for office space is already in retreat. Many firms are reporting unexpected productivity gains from the enforced ‘work from home edict,’ and have cancelled leases in favour of smaller, more flexible office space. Meanwhile, those eponymous start-ups, for whom flexible office space was the norm, have made a virtue of necessity, slowing their cash-burn – and mollifying investors in the process – by closing their offices altogether.

As economies recover from the effects of the lockdown, companies will fall into three categories based on their prospects for recovery from the dual supply and demand shock – ‘L,’ ‘U’ and ‘V’. The Tech giants (V) have rebounded and their prospects remain strong, even at these exalted valuations. Investment Grade Corporates (U) will take longer to recover, but even before interest rates were lowered by the Federal Reserve (Fed) these corporations were preparing for an economic slowdown. Q1 corporate debt issuance surged to the highest since records began in 1980: – 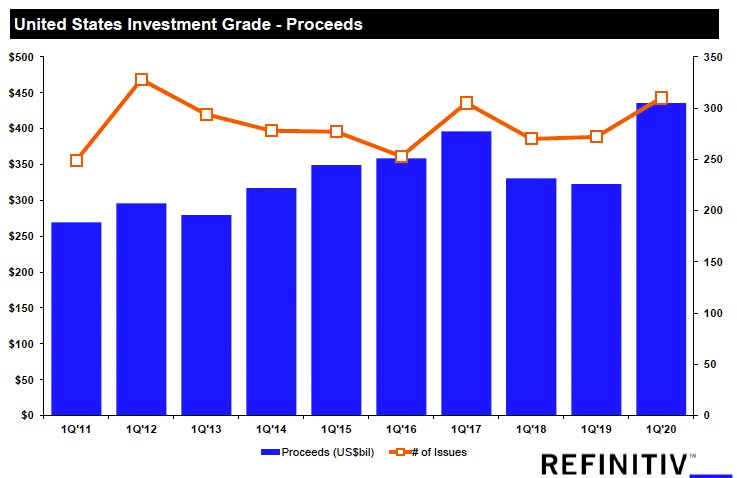 The High-Yield bond market followed in the wake of Investment Grade issuers, although the sudden widening of credit spreads in March dampened their ardour. Issuance returned with renewed urgency as soon the Federal Reserve announced that ‘Junk bonds’ where to be included in its expanded asset purchase program: – 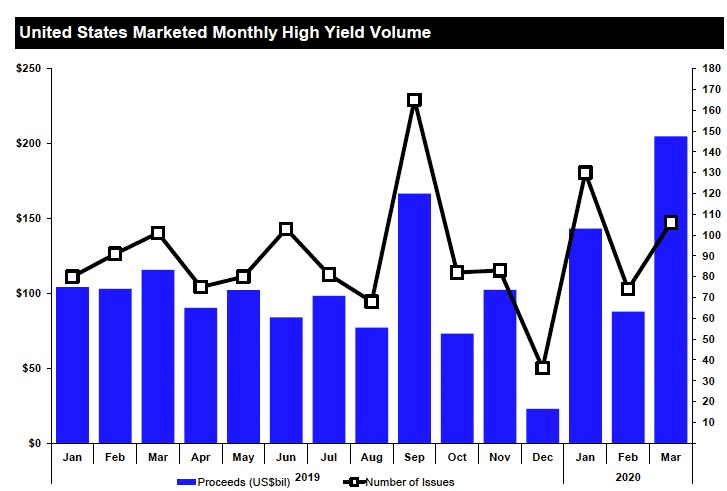 High yield bond yields remain elevated despite the interest rate cuts and Fed asset purchase promises. On 3rd June they averaged 5.8% up from 3.56% in mid-February, but far below their 23rd March high of 10.87%.

Many of the firms in the high yield sector (L) are involved in the Oil and Gas industry. As oil and gas prices rebound, they will regain some composure and, being high profile employers, they should receive government support. Other firms may fare less well, these are those destined to follow an ‘L-shaped’ recovery. Their survival will be dependent on their ability to provide employment, some will be saved, others will fail.

Stock and corporate bond markets have regained much of their composure since late March. Central banks and governments have acted to ameliorate the effects of the global economic slowdown. As the dust begins to settle, the financial markets will adjust to a new environment, one in which value-based stock and bond market analysis will provide an essential aid to navigation.

The geopolitics of trade policy, already a source of tension before the pandemic struck, has been turbo-charged by the simultaneous supply and demand shocks and their impact on global supply chains. Supply chains will shorten and diversify. Robustness rather than efficiency will be the watch-word in the months and years ahead. This sea-change in the functioning of the world economy will not be without cost. It will appear in increased prices or reduced corporate profits. Value-based investment analysis will be the best guide in this brave new world.

News flash from the Commissariat of Monetary, Mystical and Magical Affairs: A glorious bountiful future is upon us! Science has conclusively proven that savings…