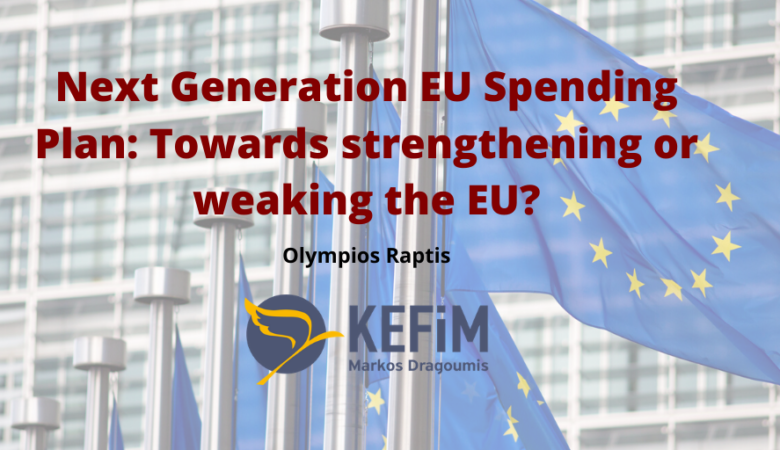 While the media, right and left-wing parties and the average newspaper reader celebrate in anticipation of “helicopter money” from Brussels, or otherwise the so-called “Next Generation EU”, classical liberals wonder where all this money will come from while worrying about the potential impact on future generations. This article is not meant to cast doubts on the capacity of heavily indebted countries, like Greece and others, to repay their increasing debts in response to the dire effects of the COVID-19 pandemic. The main concern is about the European Union itself in the long run. Are we heading towards further strengthening of the EU or towards a debt crisis, which could weaken the Union gradually?

Let us have a closer look at five reasons for concern:

The European Federalists have been arguing since long time for the EU to be less dependent on Member-States funding by being allowed to borrow and tax at the EU level. Shortly after the 2 trillion-euro recovery plan suggested by the European Parliament (15/5/2020), in their game-changing agreement, Chancellor Merkel and President Macron put a number to such calls – 500 billion.

Now, under the German Presidency, the Member-States are prompted to negotiate on the basis of a compromising proposal by the Commission to the tune of 750 billion euros.

However, the naked truth is that all calls and proposals for a step-change in EU’s spending plans feature a fundamental ambiguity. Nowhere is there a single mention whatsoever of the expected cost of borrowing at the EU level (bonds) and the anticipated annual budget deficit.

The only facts published in the Commission proposal are:

– The instrument will be “exceptional and temporary” – there will be no additional borrowing after 2024 (seriously, who could resist calls for continued tax-and-spend policies once enacted, especially if a significant growth rate were to occur at the start?),

– These taxes could contribute to the payoff of the debt. This is not the same as they “would”, isn’t it? The Commission declares that it will suggest additional own resources through taxation (on top of the already suggested taxes) between 2021-2027,

– The member-states would start repaying the bonds issued in the name of the EU on the basis of their participation rate in the EU’s budget after 2027, and – to secure member-states’ consent – the rebates will be phased out more gradually than it had previously been planned.

This point is essential. If the EU is to receive excellent ratings on its long-term bonds from the credit rating agencies, its own revenues must be sufficient to help honour its borrowing obligations. However, as it was the case of Greece, and in stark contrast to Cyprus and Ireland, bridging excessive deficits primarily through taxation spikes is a policy well known for its detrimental results in employment and growth rate. The late economist Alberto Alesina had compellingly showed how spending cuts as opposed to increased taxes is a more efficient and less “costly” policy. Nevertheless, this option is out of reach since the “policy vision” here is for new debt – a “quasi-federal” debt.

Having gained the explicit political support at the EU level in the form of the recent resolutions from the European Parliament, the Commission is now suggesting to the Council the introduction of new taxation at a pan-European level – on top of the existing national taxes – aiming to raise revenues from:

– digital technology companies (which may admittedly have been avoiding taxes)

– thousands of companies with a revenue higher than 750 million euros per year, in return to their benefits from “accessing the common market”, as well as

According to the Treaties, taxation, as a policy area, is subject to unanimity at the Council level in two stages: at the beginning, as a discussion to accept it or not as an item on the agenda and at the end, as a new legislative proposal (if there is agreement).

Currently, the Commission is trying to lure member-states into giving the green light to have 70,000 of high-revenue firms pay an annual lump sum to the EU. However, the challenge would be not only to convince the member-states currently implementing more liberal policies, such as the Netherlands, but also these many other member-states applying much higher corporate tax rates. How could they all be convinced if afraid of significant capital flight to other more market-friendly destinations inside or outside the EU?

Moreover, the anticipated amount of tax revenues may be overestimated. For instance, in the past the Commission had estimated a “digital tax” to bring 5 billion euro annually into the EU coffins – now this value has been doubled to 10 billion euros. In applying unilaterally such measure in its own soil, France collected 500 million per year. Are we sure the EU has another 20 economies similar in size to that of France, to help attain the 10 billion euros goal?

As a long established practice the Commission accompanies its legislative proposals by impact assessment studies. However, due to this unprecedented economic crisis as a result of the pandemic and the pressure to act as fast as possible, there is no indication whatsoever as to whether this suggestion of additional taxation would negatively impact the competitiveness of the European economy or what the optimum taxation rate should be. If it’s already doubtful whether taxation at the EU level can help finance a 750 billion euros-worth debt, how would things evolve if this debt were to rise to 2 trillion euros – the levels suggested by the European Parliament? To note that the Parliament threatens to veto the negotiations on the multiannual EU budget if its demands are not met.

In 1790, Alexander Hamilton, the first Secretary of the Treasury of the United States, devised an innovative solution to the debt troubles of the Northern states by introducing federal debt which would be covered – as we expect to happen in Europe now – through federal taxation (against the wishes of Thomas Jefferson and James Madison).

Currently, the European Commissioner for Budget and Administration Johannes Hahn holds that this is not a “Hamilton moment” because – as stated previously – the proposed EU’s tax-and-spend plan is “exceptional and temporary”. On the other hand, for liberals such as Guy Verhofstadt we are on the verge of such a historic transition if EU leaders rise to the challenge of endorsing higher levels of borrowing and taxing at the EU level.

The discussion however is misleading and incomplete if we do not also consider two fundamental differences between the US in its origins and the EU today.

First, for decades after issuing federal debt in the USA (end of the 18th century and beginning of the 19th century), the federal budget was mostly in surplus. In order to achieve that, the US implemented a variety of policy options, including selling off parts of the territory. However, in Europe nowadays the narrative is not for fiscally conservative policies but for (unknown levels of) debts and budget deficits.

Second and most importantly, in the US the ratio of public spending (i.e. the combination of federal, state and local levels) to GDP is about 35%. Accounting state & local spending alone ranges from merely 5% to maximum 22% of GDP. In other words, it can be argued that in spite of its colossal debt the federal government has the potential to borrow further or create a budget deficit. In contrast, national government spending alone in Europe rose to 45% in 2019. Equally important, in none of the member-states was this ratio below the level of 30%, even after the decade of putative “austerity” frequently decried by the Left.

In a nutshell, while almost half of the European economy is dependent on public spending, what are the margins for additional federal-like spending from “Brussels”? This discussion is far from being theoretical. The well-known “Juncker Plan” that leveraged hundreds of billions of public and private investments only managed to bring a 0,9% increase in EU’s GDP. If Europe wishes to recover the sudden 10-20% drop in its GDP through an increase in EU public spending the amounts to be borrowed and the taxes to apply maybe inversely proportional to the fiscal capacity of the EU and its Member-states as a whole.

Conclusion: The thick red line that national expenditure in Europe needs no rationalizing but on the contrary what we need is for the EU to be able to raise new debt, taxes and deficits in parallel with its member-states doesn’t necessarily bear the hallmarks of a strengthening of the EU. On the contrary, in spite of best intentions, this may trigger a debt crisis that could eventually weaken the EU in the long run.

This article was originally published in Greek by Liberal.gr in partnership with KEFiM. Translated by Marina Kotsa.