“Lenin is said to have declared that the best way to destroy the Capitalist System was to debauch its currency….Lenin was certainly right. There is no subtler, no surer way of overturning the existing basis of society than to debauch the currency. The process engages all the hidden forces of economic law on the side of destruction, and does it in a manner which not one man in a million is able to diagnose.”1

Keynes does not provide a concrete source backing his words but deliberately used the phrase “is said to have declared.” For a good reason. As Frank W. Fetter (1899–1991) pointed out, there is no evidence at hand that Lenin actually said or wrote these words, and anyone quoting Lenin on inflation would be indeed be referring to Keynes’s opinion.2

Be that as it may, it is pretty obvious that Lenin had a good understanding of the evils of inflation caused by the issuance of large amounts of unbacked paper money. He writes:

There is another side to the problem of raising the fixed grain prices. This raising of prices involves a new chaotic increase in the issuing of paper money, a further increase in the cost of living, increased financial disorganisation and the approach of financial collapse. Everybody admits that the issuing of paper money constitutes the worst form of compulsory loan, that it most of all affects the conditions of the workers, of the poorest section of the population, and that it is the chief evil engendered by financial disorder.3

Indeed price inflation caused by the increase in the quantity of money does not only cause serious economic problems. It also brings severe sociopolitical problems. Inflation makes most people poorer, degrades their social status, destroys their dreams of a better life. People become desperate and open to radical political programs.

In times of high inflation, all too often political agitators succeed in making people believe that the free market, capitalism, is to be held responsible for their plight. They promise that the collectivist-socialist program offers the solution—like, say, imposing price stops or price controls, raising corporate taxes and taxing the “rich,” controlling capital flows, etc.

That said, it becomes clear that ramping up inflation is actually a proper tool for those political forces that wish to overthrow the existing economic and social order—to get rid of what little is left of the free market system, as desired especially by those inspired by Marxist or Neo-Marxist ideas.

In a nutshell, militant Marxism wants to topple capitalism by means of a bloody revolution. Neo-Marxism follows a different strategy. It wants its ideas to attain “cultural, moral and ideological hegemony.” Once this is achieved, people will have no other choice than adopting socialism.

The supporters of Neo-Marxism attack people’s values—family, hard work, thriftiness—stir conflict among people, discredit Christianity, and manipulate language (via calling for “political correctness”) to estrange people from their societal order, moving them away from the capitalist economy.

Neo-Marxism is alive and kicking. It has increasingly found its way into the political mainstream. For instance, the so-called political elite in many countries advocates a “Great Reset,” a “new world order,” to transform the economies, steering them away from the free market system.

Of course, inflationary policy is already being used to finance the state and its expansion. However, in most advanced countries the rate of inflation has been kept relatively low, that is, at a level that has not been stirring up outright public unrest. Inflationary policy follows the motto “Milk the cows, don’t kill the cows.”

What if Neo-Marxism makes it into central banks’ monetary policymaking? Well, you could say that it has already succeeded in doing so, for the concept of central banking is essentially a Marxist one. In their Communist Manifesto, Karl Marx (1818–83) and Friedrich Engels (1820–78) set up a list of ten “means of entirely revolutionising the mode of production.”

Among them is “Centralisation of credit in the hands of the state, by means of a national bank with State capital and an exclusive monopoly.” However, Neo-Marxism has not yet mustered sufficient supporters of outright monetary destruction, that is, a policy of very high inflation, for triggering an economic and societal revolution.

This is no reason for relief, though. As noted earlier, Neo-Marxist ideas have been gaining ground in basically all kinds of policy—education, law and order, transportation, conservation, money and credit, you name it. And so it would be consistent if Neo-Marxism increasingly undermined the consensus that relatively low goods price inflation is beneficial.

It is in this context that the US Federal Reserve’s latest change to its inflation target deserves mentioning. In August 2020 the Fed announced that it aims to achieve its 2 percent inflation goal only on average in the long term. This means that the Fed will allow for inflation in excess of 2 percent if and when inflation is below 2 percent in preceding periods.

The reason is obvious: the Fed is monetizing debt on an epic scale, through which it increases the quantity of money heavily. By the end of August 2020, the US money stock M1 had grown 40 percent compared to last year, M2 by 23 percent. The increased quantity of money will, sooner or later, most likely to be reflected in higher prices, be it consumer and/or asset prices. 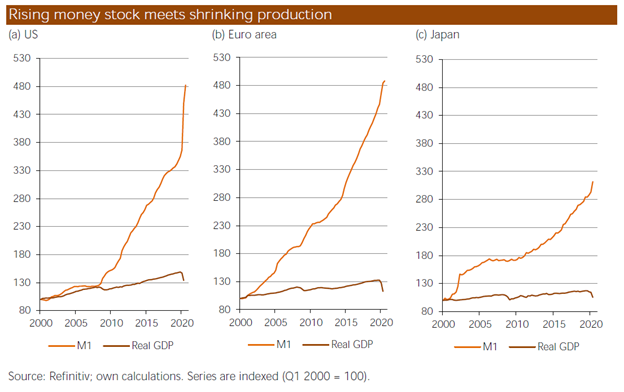 This may not be fueled by a deliberate Neo-Marxist creed, but the Fed—and this holds true for other central banks as well—is certainly playing into the Neo-Marxist goal to shatter civic order, to drive people into socialism, and this is achieved as Lenin allegedly suggested: through the debasement of the purchasing power of money.

0 replies on “Inflation and Marxism”