It should not come as a shock to readers of your author’s musings to learn that he views the mindless, repetitive, near-valueless kerfuffle which exercises the vast majority of the journeymen toilers and scribes involved in the game of prognosticating of their beloved GDP aggregates, with an amusement which is tinged with just a soupçon of contempt.

The weather was unseasonably dull, those confronted with the surveyors’ clipboards had just argued with their spouses, the price of Apple stock halted its upward surge, or the football season got off to a poor start, so ‘consumer confidence’ has drooped and, ergo, by misapplying Keynes’ trite observations on ‘animal spirits’ to spenders, rather than to the businessmen he so despised, that means retail sales will be soft. Since – in yet another tautological nonsense – ‘consumers make up two-thirds of GDP’, then the holy number itself must be headed lower.

Ye gods! Quick, before we sink into the quagmire of a ‘liquidity trap’ or the ‘multiplier’ becomes instead a divisor, the government had better spend even more – no matter how uselessly or counter-productively – to keep up ‘demand’ while the central bank, for its part, had better stand ready to induce people whose present distress is largely attributable to their past over-borrowing to contract yet further, barely-payable obligations and to fritter the proceeds away on it-matters-not-much-what as long as a cash register rings somewhere, as a result.

Let us once more enumerate the problems inherent in the fixation on GDP, since to look beyond this false god, seems to us a sine qua non of the attempt to perform any more useful an analysis.

Firstly, let us note that the measure is so far from being all-encompassing that it actually ignores roughly two-thirds of the spending which routinely takes place in an advanced economy. In essence, this means that it excludes much of the microeconomic exercise of discretion and entrepreneurial decision-making that goes on and hence is blind to matters which both assure the continuity and give rise to the main variations in the complex, delocalised, real-world economy which surrounds the blinded windows and sound-proofed walls of the statisticians’ ivory tower.

Secondly, it overlooks the fact that if the government arbitrarily orders you to wear two shirts to work in place of the usual one, or forces you to take a far more roundabout route to get there, the resulting increase in textile sales and gasoline usage will nevertheless be counted as a valued addition to output, not a petty act of tyranny.

Thirdly, it is blithely indifferent to the fact that capital is inherently heterogeneous and that labour is only partially versatile. Hence, it cares not a whit that it is all too easy to spend good money in filling the fridge with otherwise fine foodstuffs for the preparation of which we have neither the requisite skills nor the necessary kitchen utensils to hand; or which, when cooked in combination, will offend against the palate of the prospective diners.

Furthermore, it neglects to give any contemplation to the sheer inadmissibility of simply adding a side order of fries to an airbag activating device, to an anti-theft window lock, to an aircraft instrument system as a means of counting the combined material blessings of several hundred million souls – people who also each reckon their enjoyment of whatever small smattering of this mind-boggling diversity it is they partake of in a wholly idiosyncratic and non-additive manner.

But beyond even these epistemological objections, the  quaint truth is that all the blind econometrics, all the angels-on-a-pin correlation analysis, all the past-is-prologue trend extension which goes into the many attempts at predicting this swirling, statistical duck soup of a number are often no more than grand exercises in GIGO – garbage in, garbage out – since the data themselves are inherently suspect.

Take, for example, the recent revisions to the series for the years 2007 to date. It turned out that this latest, ostensibly improved guess at GDP came up a cumulative $264 billion short of the former one – a difference of around $10 billion a month. All very well, you say, since the error amounts to no more than 2% of the typical annual total, or  under a $1 per day per capita, but then reputations are routinely made and lost, fortunes wagered and won, and far-reaching political and financial policy decisions taken on far smaller margins than that.

Even more droll was the discrepancy in something that the State should surely have been aware of all along since it was (a) bailing out half the banks, brokers, and Big Businesses in the country at the time and so presumably took the pains to glance, however cursorily, at their accounts and (b) it has long insisted, in any case, that they submit reasonably representative financial information (and binding tax returns) once every quarter.

Thus, to find that, for 2007-9 combined, after-tax corporate profits turned out to be $304 billion less, the second time around the spreadsheets – a sum representing around a two-fifths of the annual average –and with a $254 billion, 190% revision in the tottering financial sector component alone – well, it does make you wonder. 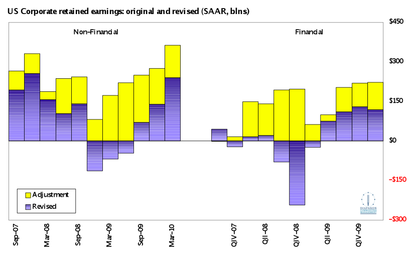 The BEA number crunchers even managed to understate non-financial corporate dividends by $243 billion – or by roughly one half – meaning that (given the accompanying profit shortfall) cumulative retained earnings were out by $295 billion – a mere 245% of their period average! To put this into context, that missing retention would have almost been enough – at the prevailing rates -to have paid the wage bill of a fifth of the entire manufacturing workforce across the nation during those three, blighted years of cutback, curtailment, and contraction.

Astrology may be no more scientifically burdened than is most modern macroeconomics, but at least the guys with the pointy hats and the Catweazle beards know exactly where and when Venus will be passing through the House of Aquarius, and will not therefore come knocking on your door two years hence to say: ‘Sorry, it must have been a speck of dirt on the telescope lens. You should have avoided tall dark strangers at all costs, not married one of them!’ 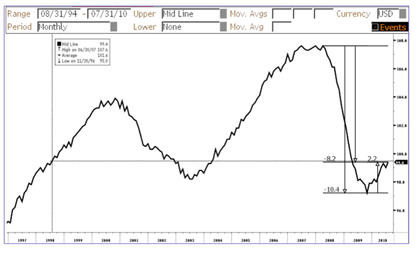 Incidentally, it will be very interesting to see just how ‘cash-rich’ corporate balance sheets turn out to be when these new estimates are incorporated into the Flow of Funds numbers in a month’s time. Certainly, this might go someway to explaining why it is that, this far into the recovery and after the application of record amounts of so-called ‘stimulus’, private hours worked are still where they were back in 1998, having recouped only around a fifth of their losses from the peak, while the headcount has made good barely one in every fourteen jobs shed in the course of the slump.

Ironically, the fact that the trade gap is once more burgeoning as exports stall and imports march on upward is seen by the Gee-whiz GDP-ites as a call for more stimulus (what else?) whereas what it really signifies is that even with so much labour and capital idled, America is living, once again, far beyond its means and hence borrowing the money to do so, wracking up record imports of – and a record imbalance in – consumer goods, as it does.

However, we should not wax too indignant at the prevailing Flat-Earthism of the economists and the investors whose views they colour, for the current growing apprehension about the strength and sustainability is exactly what we have been anticipating since the start of the year, if not before.

Our argument has been based – and broadly validated by subsequent events – on the three-pronged supposition that:-

With forcible, ‘unorthodox’ QE having largely peaked (pro tem) and with the more traditional fiscal-deficit monetization process of re-inflation having also reached its upper bound (at least until resort is once more made to the credit–jacking of the remaining, higher-level sovereigns and supras in support of their weaker peers and sub-divisions), real monetary growth has been everywhere decelerating since the turn of the year.

Lo and behold! With the usual lag of two-three quarters, the all-important growth in business revenues (and, hence, in business spending) has responded and has been reflected in those key sentiment indicators – such as the NAPM and IfO surveys – which these largely determine.

Given their significance, we make no apology for trotting out the relevant charts once more, by way of substantiating this claim. 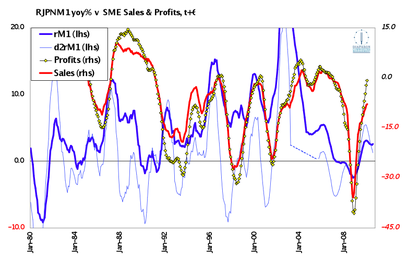 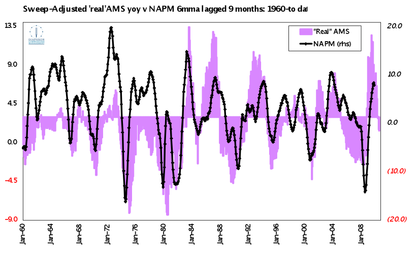 Most importantly, the slowdown in real money creation in China has been dramatic: dropping by a   third from 34% yoy to 23% in just six months – a shift which is, moreover, probably understated given the unrepresentative nature of a Chinese CPI construct which is not only sullied by the inclusion of many administered (i.e., artificially fixed) prices, but which excludes many important private expenditures. The impact of this monetary slackening on such real-side quantities as industrial production could not be more clear. 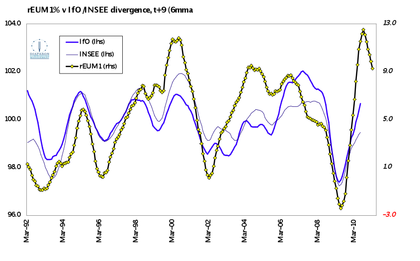 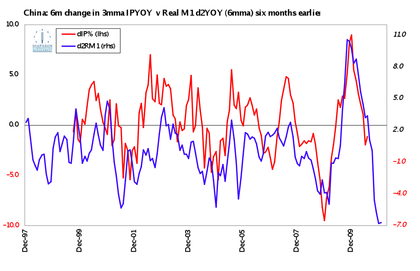 Is this the dreaded “double-dip”? Not necessarily of itself, but the emerging retardation – even if this would not otherwise become a retrograde motion – may nonetheless give financial markets a fright sufficient for them to undermine a fragile real economy which remains largely uncleansed of the toxic waste of the Boom and whose functioning is still impaired by the many inappropriate constellations of capital and labour held over therefrom, largely at the behest of the State.

In such a condition – and absent sufficient incentive or means for corrective entrepreneurial action to effect a curative re-ordering – this unsteady structure is likely to sway and shudder once more. As it does, it will appear to the many 1937-paranoids in authority (who are sadly unwilling to allow it to be partially dismantled and properly re-assembled) to stand instead in need of further, ad hoc buttressing.

The next downswing – should it become aggravated by a new wave of violent deleveraging – will thus contain the seeds of the next monetary intervention and thence the next ersatz rebound, all of which cosmetic surgery is likely to postpone, not promote, a genuine recovery for far longer than is in any way necessary.

Almost certainly prices for goods in Cyprus will rise as a result of its banking crisis, because the imposition of capital controls will restrict…