According to the National Bureau of Economic Research (NBER), the official recession arbiter, the US economy is currently at its fourth longest expansion in history. By the sheer nature of a capitalistic society with its inherent cyclicality it is a safe bet that a new economic recession will hit in the not too distant future. We have argued since June last year that the next recession is imminent and we now feel increasingly confident that our prediction will come true before November’s Presidential Election. Even mainstream forecasters seem to jump on the increasingly likely recession-bandwagon. 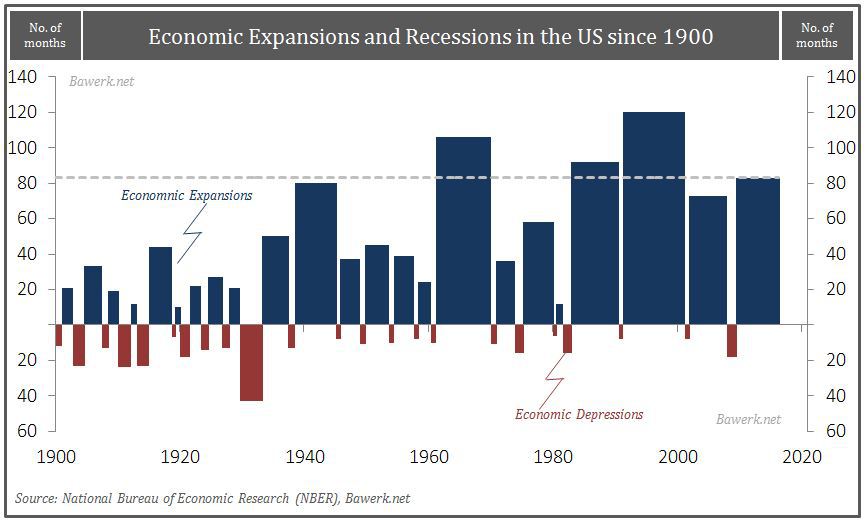 Since recessions are measured by the change in a highly flawed GDP concept, where money outlays on final consumption account for about two thirds of overall flow it is natural to start our analysis with retail spending. According to latest Census Bureau data total retail sales fell 0.2 per cent in March following a slight contraction in both February and January. In other words, retail sales fell over the entire first quarter as once surging motor vehicle sales (on back of lowered credit standards) reached its apex in Q4’2015. 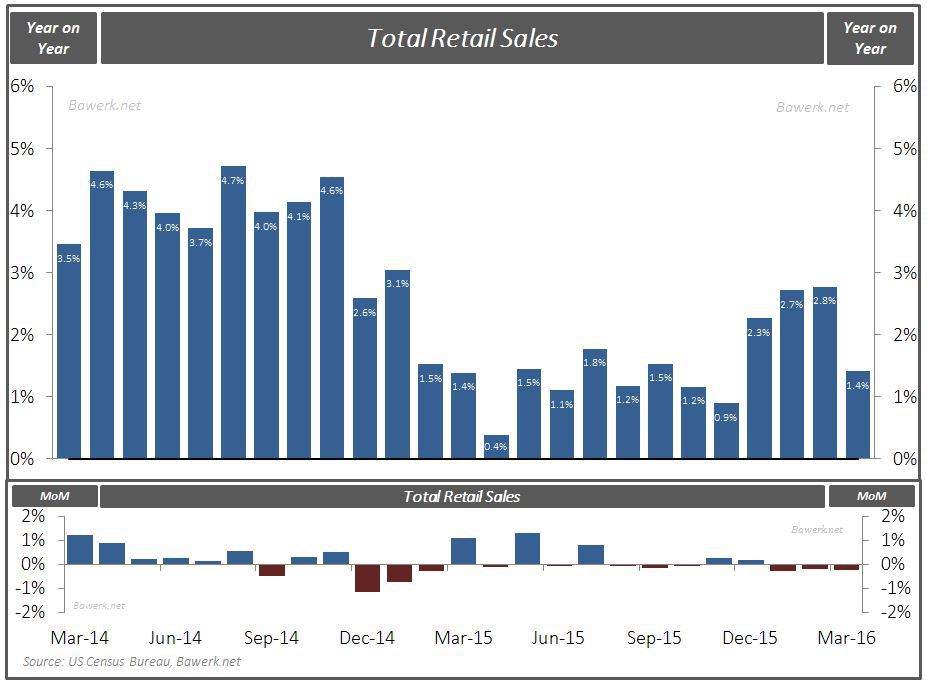 Issuance of auto loans have been running at an annualized rate of USD80bn pushing up the share of auto loans to disposable income. Debt funded consumption is not a viable long term growth strategy and as usual the American economy pulled future demand into the present by issuing ever more lax car loans. We have seen the story before and we know how it ends. 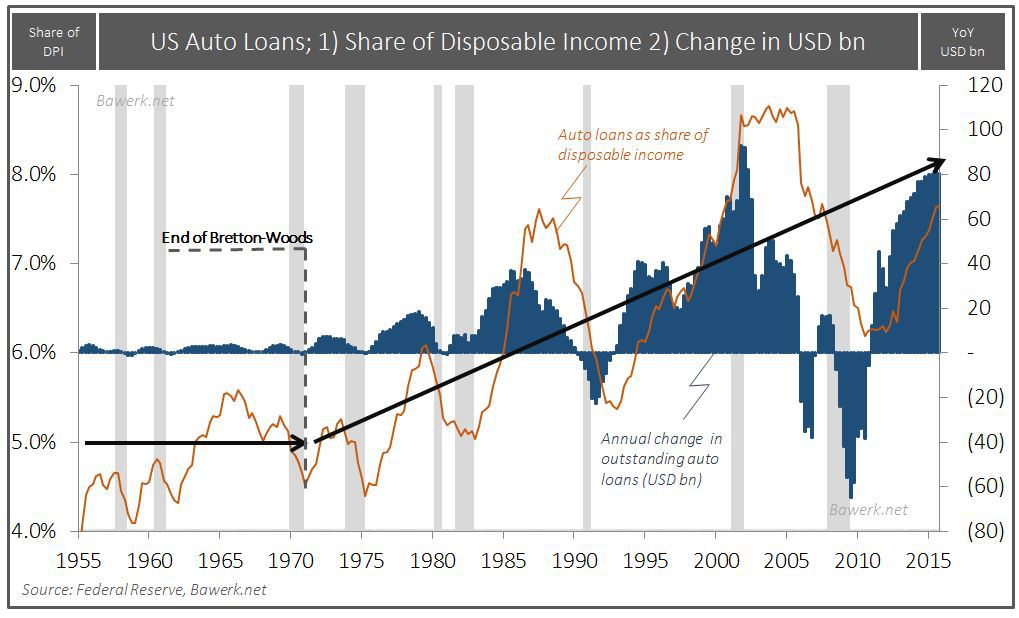 As the consumer reaches a breaking point in terms of how much new credit that can be piled on top of legacy debt, even at rock bottom interest rates (NIRP anyone?), inventories of cars are growing faster than sales and auto assemblies seem to have peaked for now. At 12 million units annual rate we are certain there is not much growth potential going forward 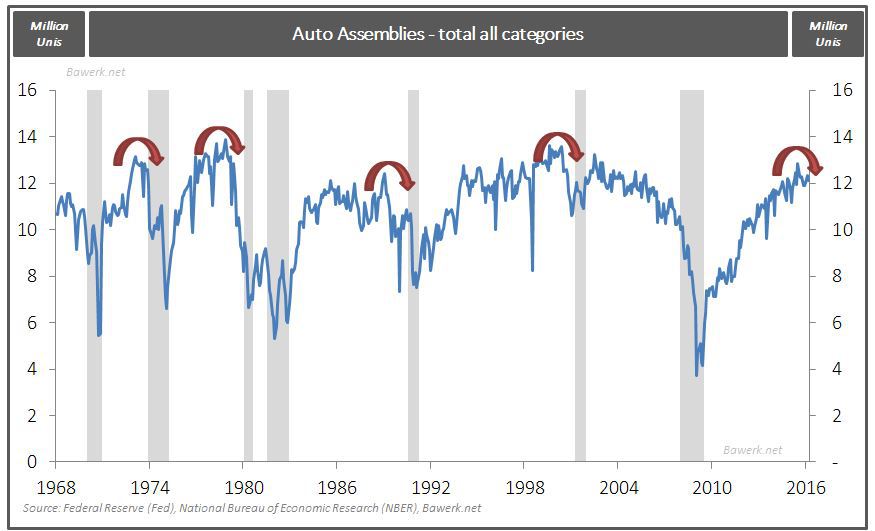 Looking at retail sales over a longer horizon we find that every time the yearly rate of growth fell below three per cent the US economy went into recession. 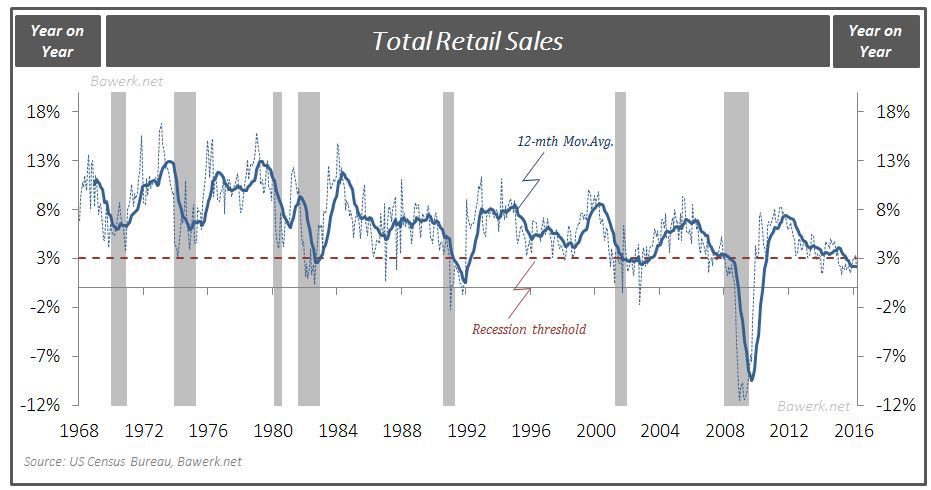 Inventory to sales are obviously moving higher. However, due to increased efficiency enabled by more sophisticated computers and software the ratio has been structurally trending down for decades. In other words, we need to look at the difference from trend to get a complete understanding of current retail sales to retail inventories; levels are now on par with the worst of the GFC. 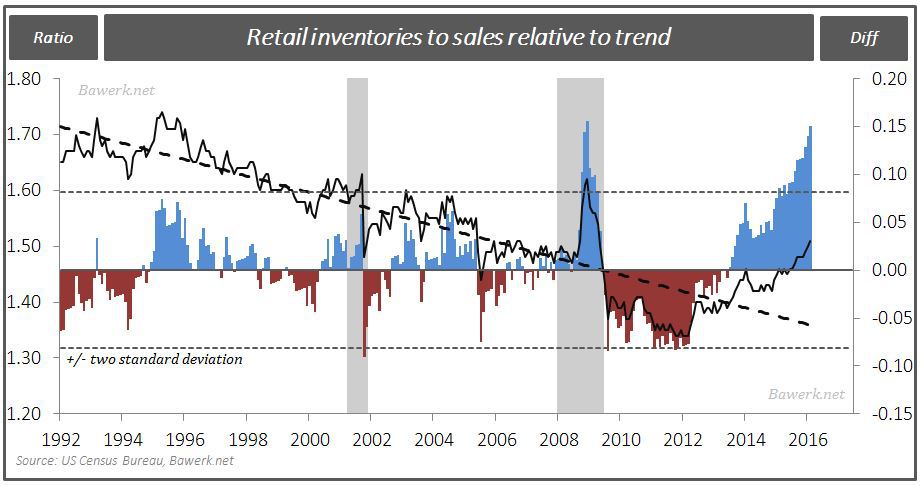 Wholesale sales are in even worse shape with inventories still growing on a year on year basis while sales have contracted for the last 14 months. The inventory to sales ratio need to trend adjustment to show what is glaringly obvious to us all – the US wholesale industry is in recession! 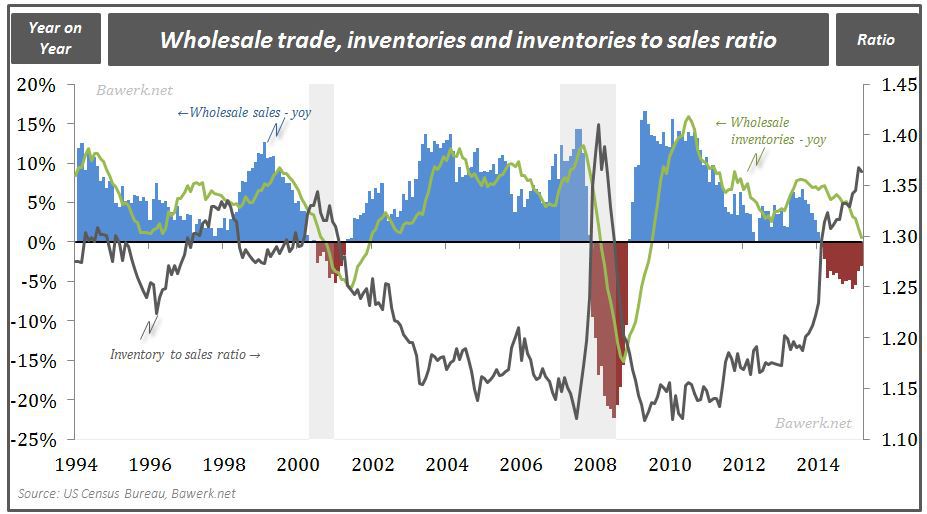 Total business sales have rolled over, falling for the last seven months and thus substantiate our argument of a materially weaker US economy. 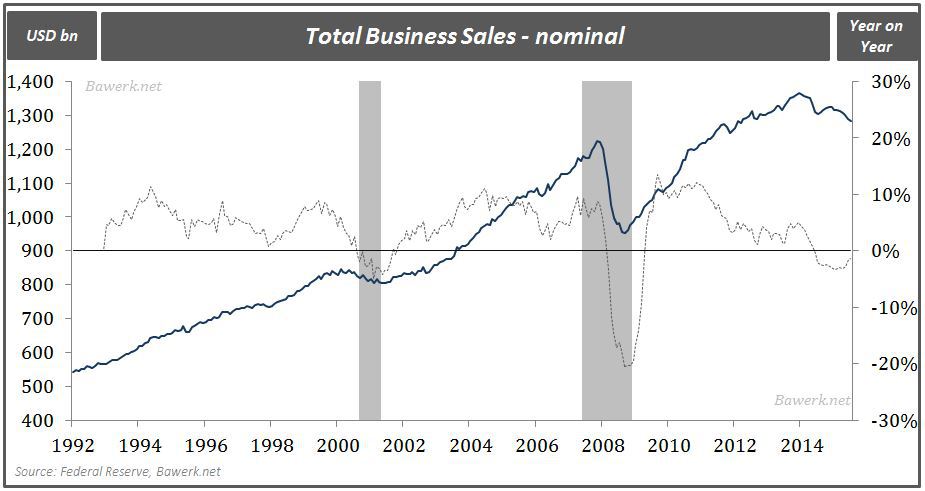 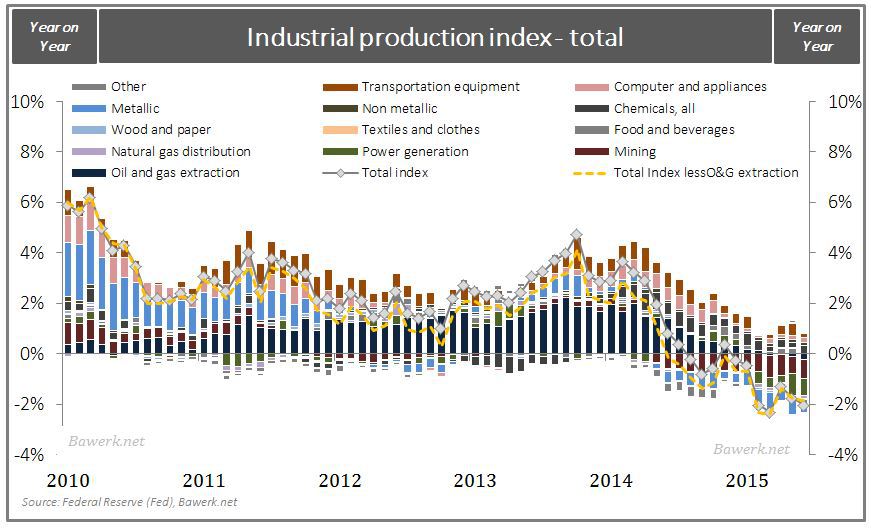 It is interesting to note that the US economy has never experienced more than eight months of month on month contractions over the last 12 months without entering a recession. That level has been breached a long time ago. 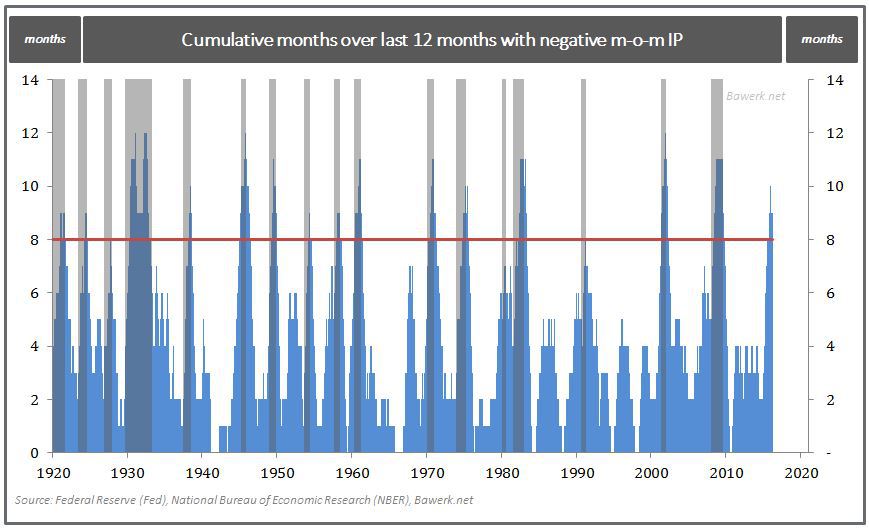 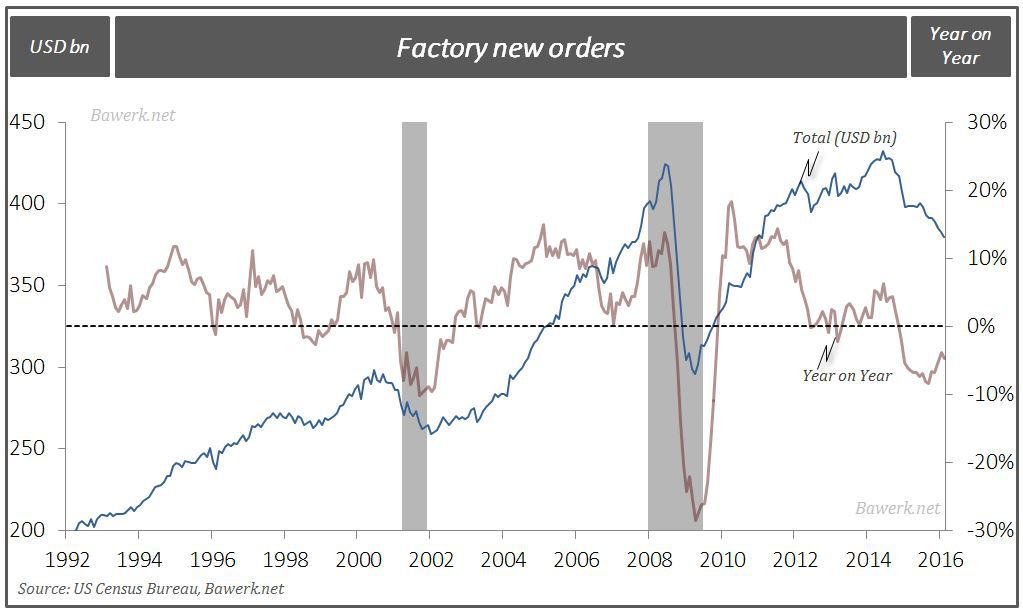 Exports and imports are both falling on a year on year basis. While this time series is more volatile (value based) we know that the US economy has never experienced the current level of export contraction without being in a recession. Some would counter that this is mainly due to lower prices on refined oil products, which the US has become a net exporter in, but adjusted for this exports are actually contracting even more. 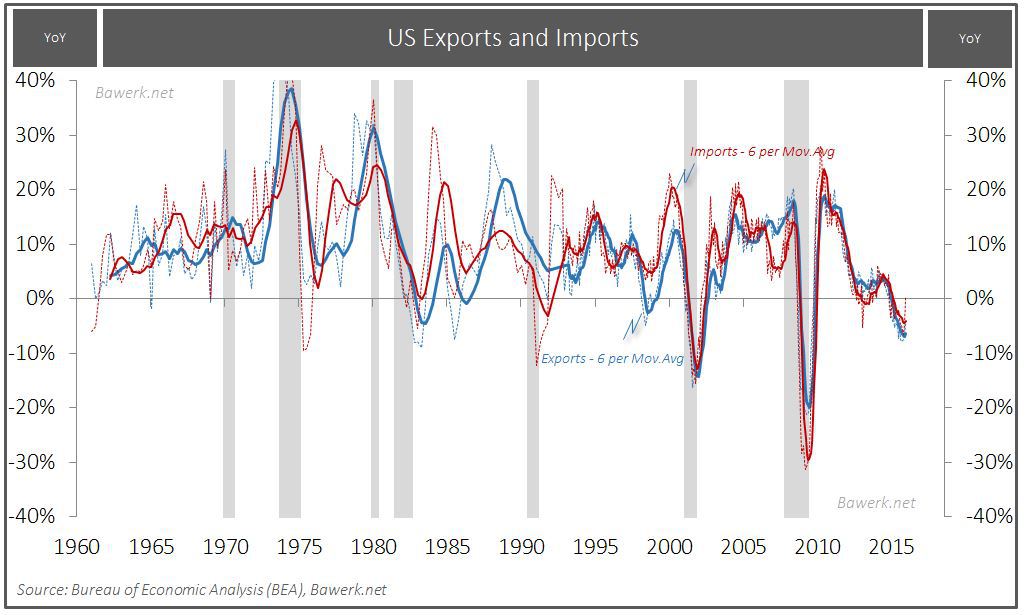 With falling sales, exports and imports, rising inventories and lower output it is no coincidence that corporate profits are falling. Historically falling profits are one of the best recession indicators we have with only one false signal since the 1950s. In the fourth quarter of last year non-financial profits were down more than 14 per cent on the previous year, the second consecutive quarter of falling profits. 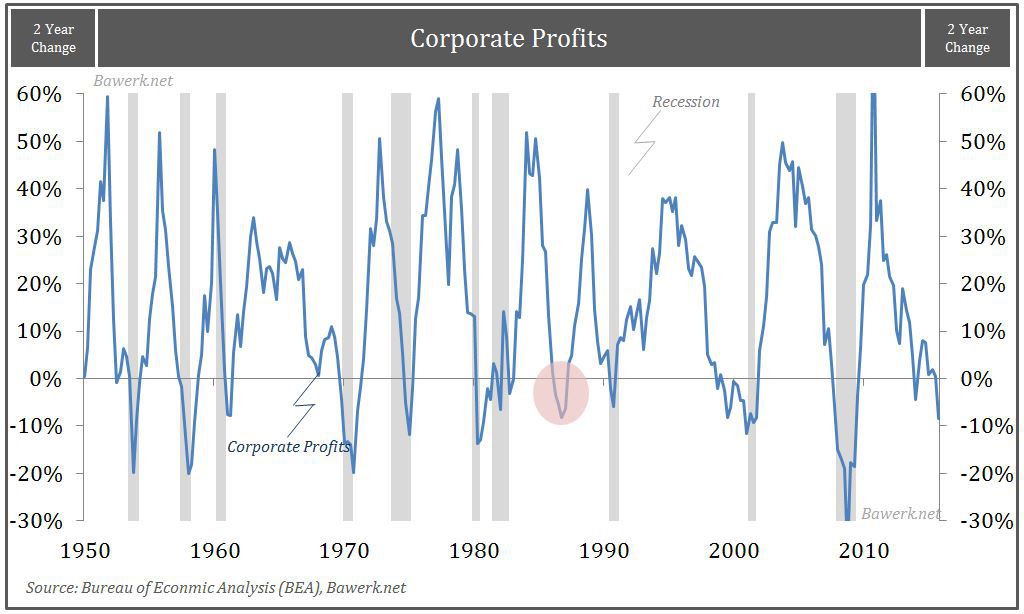 Per the above argument it’s safe to say large parts of the US economy is already in a recession, but one last piece of the puzzle remains to be solved. How come the labour market performs so well despite all the gloom and doom we witness in the overall economy? According to the Bureau of Labor Statistics (BLS) the US economy created 2.8 million jobs over the last 12 months; that is almost on par with the booming economy of the 1990s. Despite this, we do not see pressure on employees to work more hours, nor do we see employers bidding up wages. Something does not add up. Some could even say BLS is actually just BS

First of all, note that the establishment survey is model based and hence lagging in nature. You will never spot a trend break in real time by looking at the monthly BLS numbers. We looked at the unrevised payroll data going into previous recessions and we find that original data are always revised down after the recession fact. As the recessions gain momentum the trend becomes negative and subsequent revisions out of the recessions tend to be upwards, as we would expect from a lagging indicator.

In other words, if the US is in fact slowing down and heading into a recession it is highly likely that the current strong payroll data will be revised down. 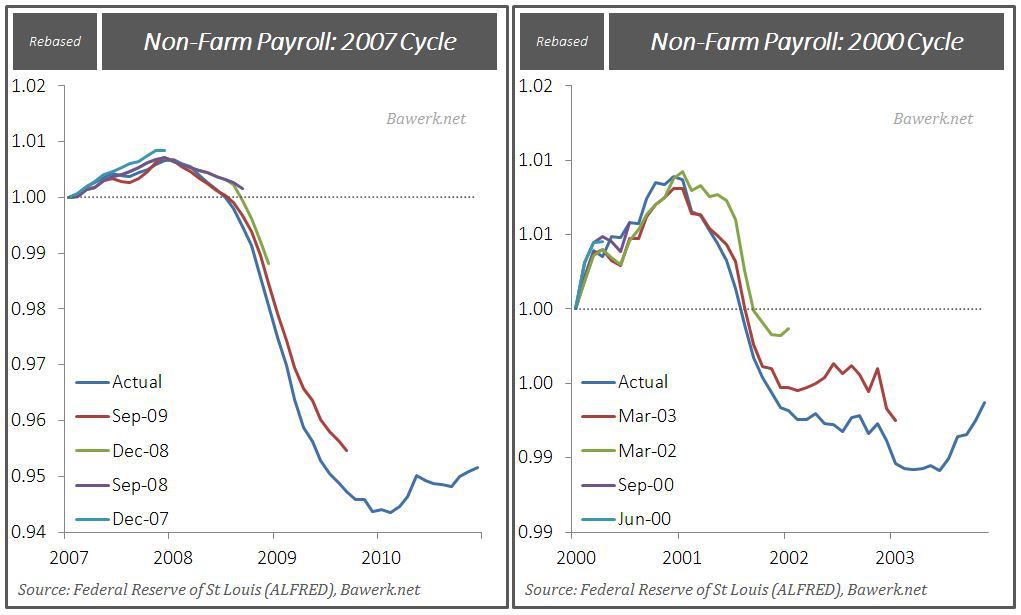 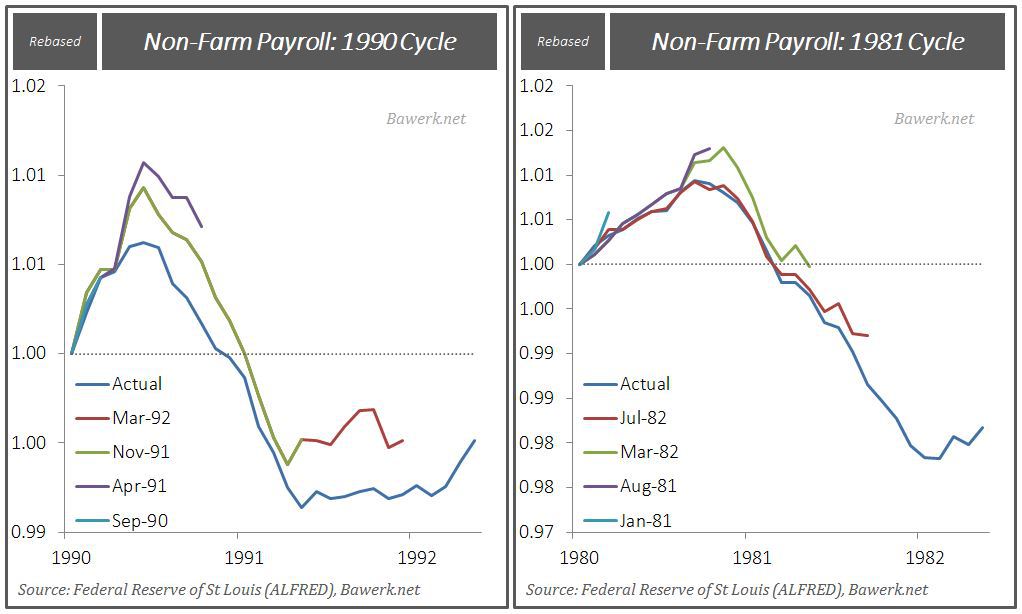 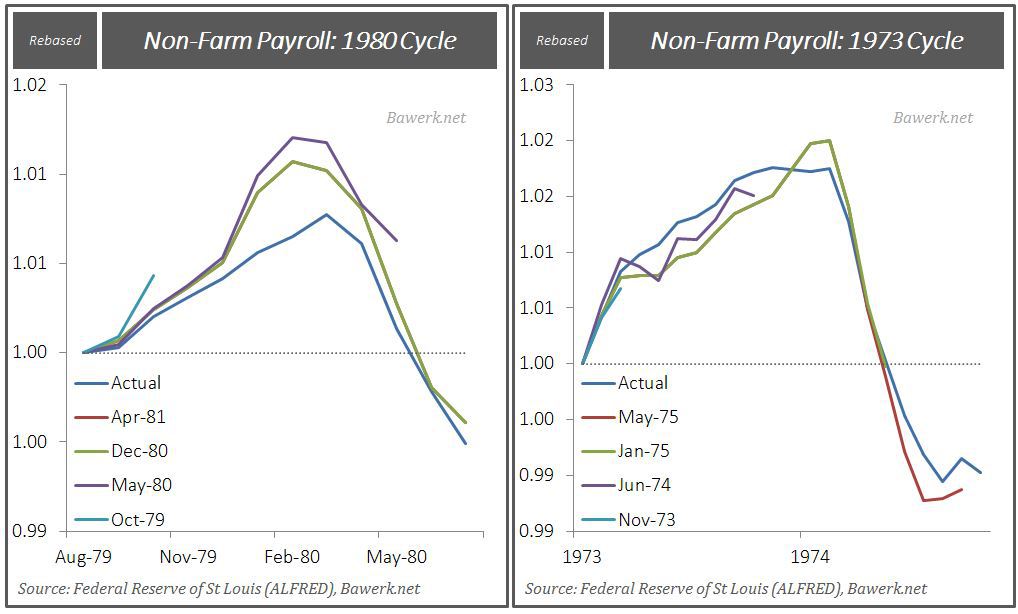 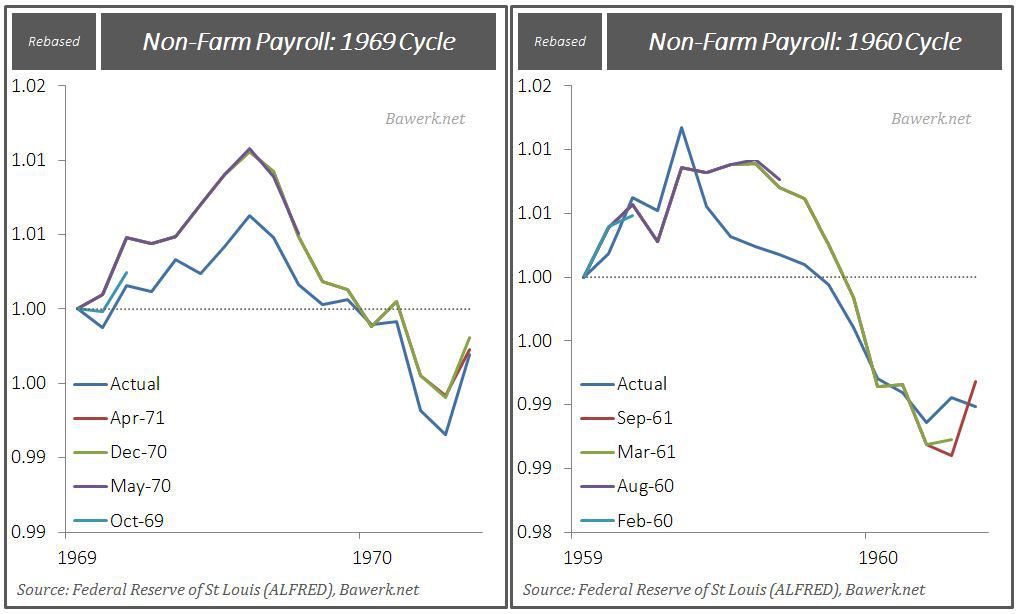 Secondly, the BLS added on average more than 70k jobs per month over the last 12 months from its so-called Birth/Death adjustments. These are fictional jobs based on the assumption that businesses are created every month and thus employs people that are not captured in the BLS estimates. As always, these adjustments are based on historical data. However, as the chart below shows, new business entries have been declining since the late 1970s while business exits have remained stable. After the crisis more businesses exited than entered rendering the BLS birth/death adjustments useless. In 2013, the latest year with data, business entry and exit rates were more or less identical. Over the last 12 months the US economy added almost 900k fewer jobs than the official estimate if we disregard birth/death adjustments. 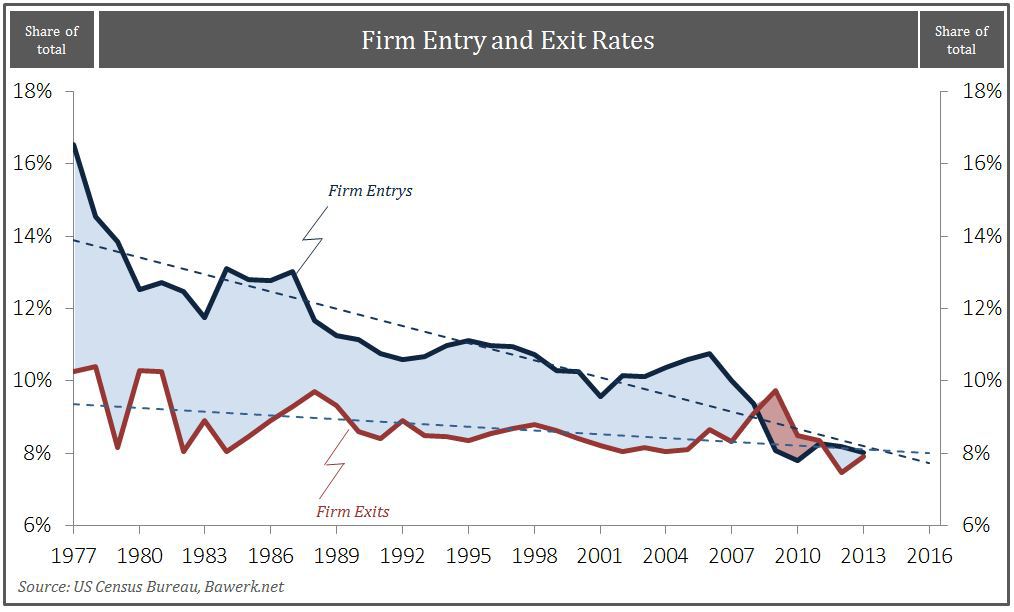 US retail sector added almost 400k jobs last 12 months, which is strange given the fact that retail sales performed poorly throughout the year. 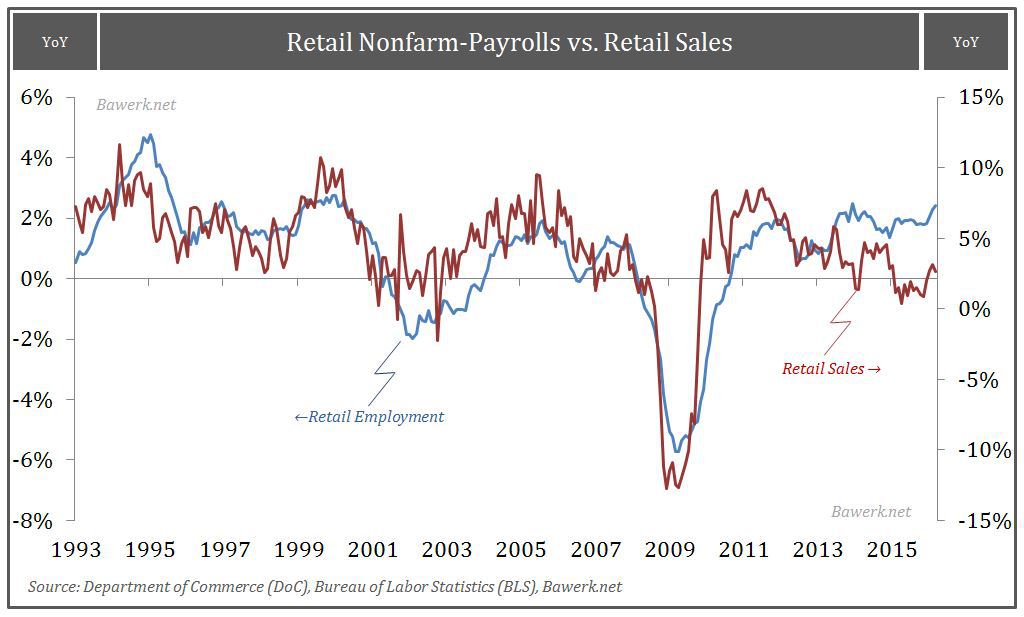 We have also seen a decoupling of paid in withholding taxes on income and employment versus annual payroll growth. Lower growth rates in real withholding taxes suggest 1) Americans are hired in either part-time and/or lower paid jobs (which we know is true) or 2) the current pace of employment growth is not reflecting the real state of the labour market. The truth is probably somewhere in between the two. 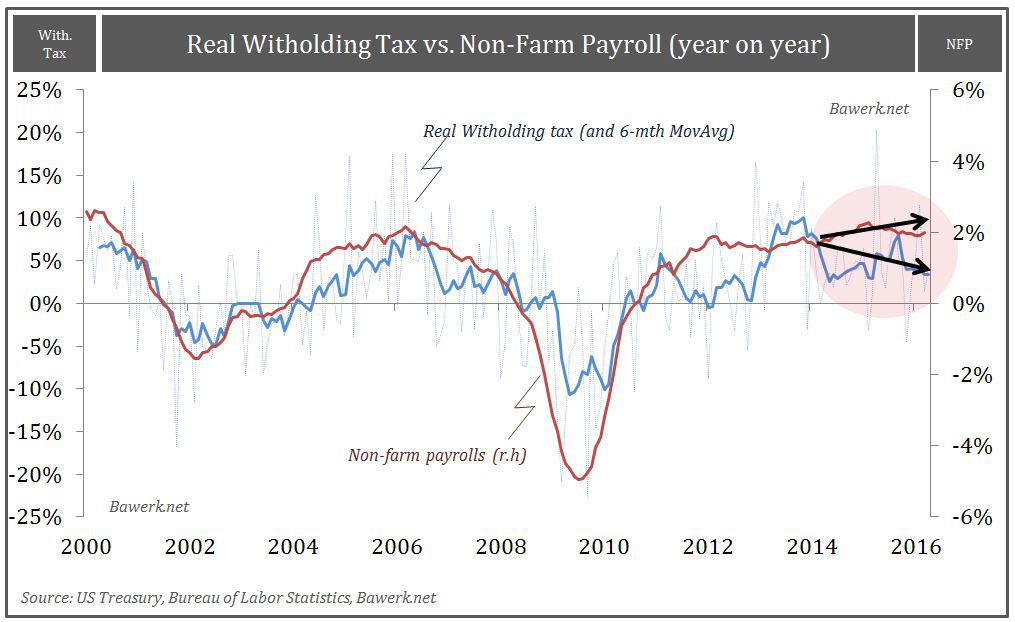 As companies and household are under increasing stress a feedback loop starts to emerge in financial markets. Financial stress indicators, such as the one provided by the Federal Reserve Bank of Cleveland, are at high and rising levels. 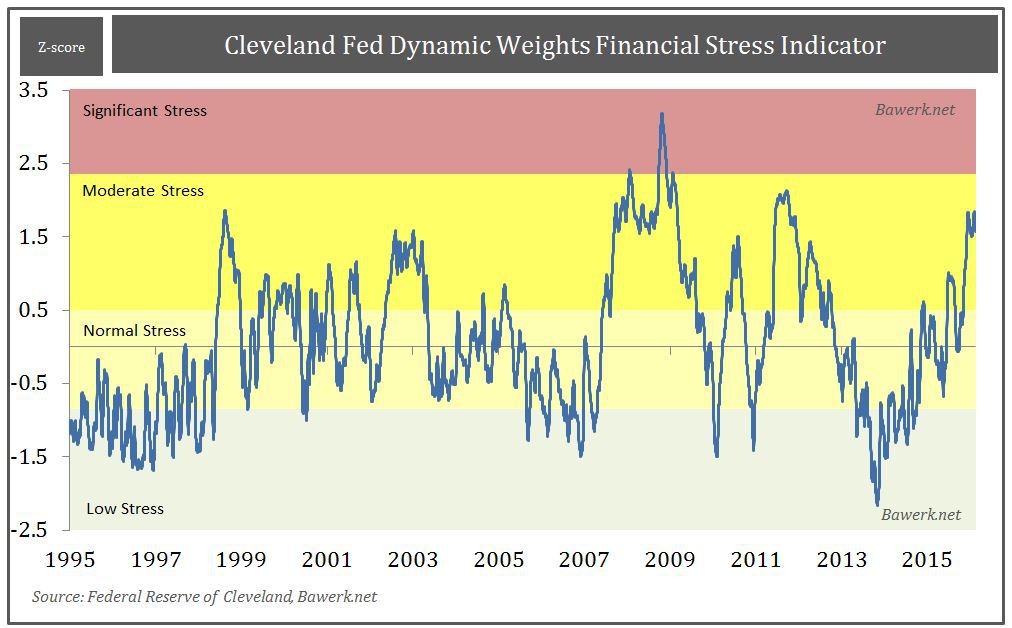 Later today (April 28 2016) the Bureau of Economic Analysis will release their advance estimate of first quarter GDP. Federal Reserve Banks of Atlanta and New York have released their “nowcast” and both point to somewhere between 0.5 and 1 per cent annual rate. However, that could easily be tilted, in both directions, by changes in bloated inventory levels. As our cumulative inventory / sales chart show the absolute difference between sales and inventories have never been larger, even beating the level prior to the GFC. Remember, these things always take the escalator up and elevator down. When inventory liquidation starts in earnest we will see materially lower growth and then suddenly contraction. 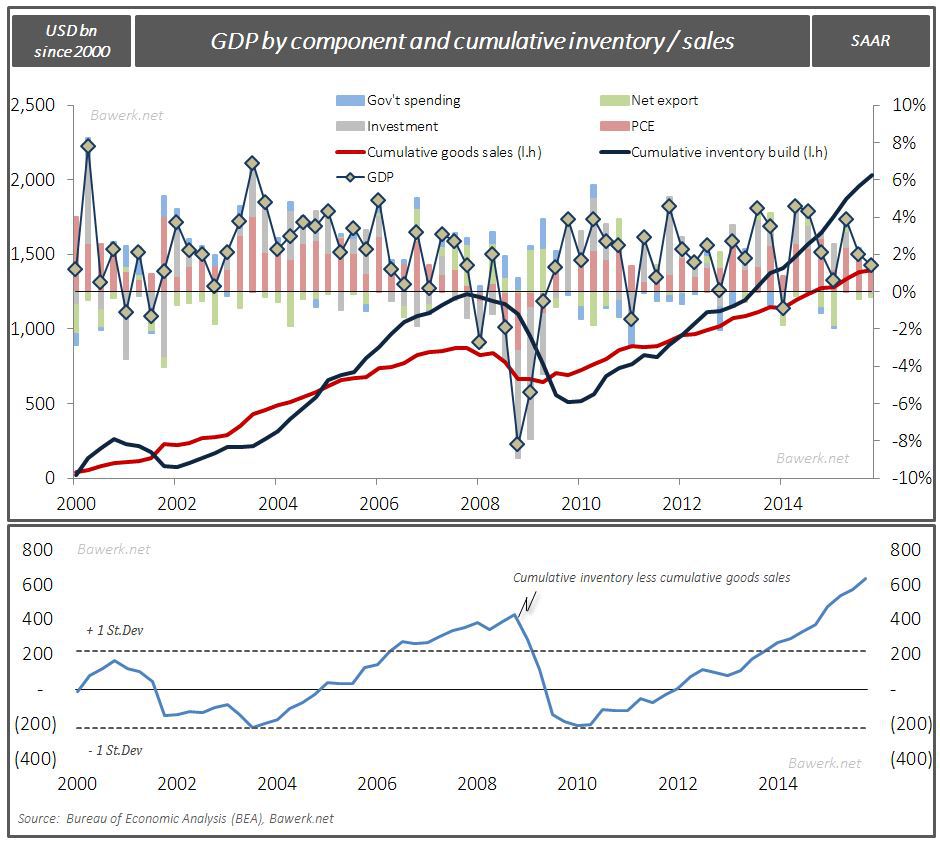 To conclude our very chart heavy update we would like to point our readers to the time series that will eventually make the most bullish sell-side analyst throw in the towel; weekly initial jobless claims. When this series break trend and move higher we know with full certainty the US is in a full blown recession.

A windswept Peter Schiff, on August 17th, discusses more negative fundamentals for the US Dollar after news from China that the Chinese government are recently…