Sean Corrigan, Chief Investment Strategist at Diapason Commodities Management, has kindly agreed to the reproduction of his briefing “Material Evidence” by the Cobden Centre. For this, 29 July 09, edition, Toby Baxendale provides commentary on Sean’s preferred measure of national economic performance: rPNNPpc. Corrigan shows that real wealth in the USA is now back to pre-1995 levels.

As most Austrian-school economists are never given jobs by the mainstream in academia, they are forced use their knowledge to create wealth: they largely succeed. The linked PDF is from one of the great contemporary thinkers and writers in economics: Sean Corrigan.

Now, if governments — as the monopoly issuers of money — pump an additional 10% of newly-minted cash into the economy through ‘quantitative easing’, it will come as no surprise to find an increase in the number quoted as GDP.

This, of course, is just a game of smoke and mirrors. As I have pointed out elsewhere, it is only the forgoing of consumption through real savings that allows investment in longer and more complex — and thus more productive — methods of production to create sustainable, growing wealth. So, what we as eager participants in the economy want to know is not the value of some inflated figure, but what Corrigan calls Real, Private, Net National Product Per Capita or rPNNPpc1.

What is “Real, Private, Net National Product Per Capita”?

Governments can only take wealth that has been previously created. They dispense this confiscated wealth at will, perhaps to people who are less productive2, perhaps creating expensive capital projects, or perhaps even destroying people and wealth by waging war in other countries.  Sean writes:

[L]et us discard the government portion [of GDP] since the economic worth of this is not only highly contentious ‐ being priced at cost, being involuntary in its provision, and arguably being composed of as many negative ‘bads’ as positive goods – but is also moot because it can only represent a forced redistribution of wealth already created elsewhere, in the private sector.

After excluding government, Sean then deducts capital consumption: this is just replacement of existing capital that has been worn out. You can then see the real wealth of the nation and work out a per capita amount based on population. Sean deflates his figure by the median Consumer Price Index for the time series to arrive at rPNNPpc:

[I]n the attempt to make a fair comparison across an era of a chronic erosion of the value of the unit of account – and cognisant of all the inherent distortions involved therein — we will deflate the result using the median CPI index. What this leaves us with may be rather a mouthful — being a measure of real, private, net national product per capita – but it is also a reasonable first estimate of the effective income flow experienced by the average person.

Emphasis mine. Corrigan’s plot of rPNNPpc is revealing: 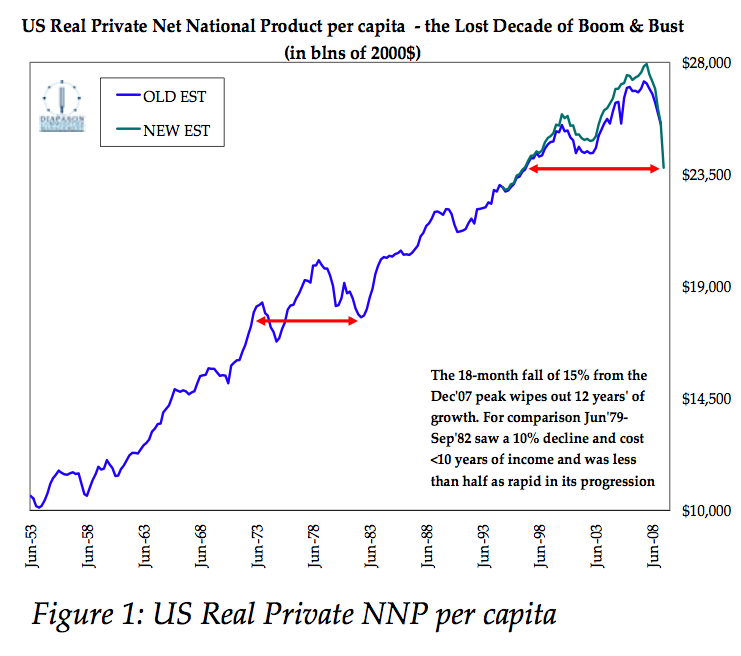 Corrigan shows that real wealth in the USA is now back to pre-1995 levels, wiping out gains from the recent credit bubble as well as the preceding tech bubble. In comparison, the official data for GDP shows only the last couple of quarters in decline. Corrigan writes:

To get some sense of the scale of the collapse, the fall to date has been half as big again – and more than twice as rapid in its progression – as that suffered around the second oil shock of 1979‐82, otherwise the worst since WWII.

I suspect the figures for the UK would show a similar effect.

Written By
Toby Baxendale
More from Toby Baxendale
http://www.ft.com/cms/s/0/c4e12218-ced4-11de-8a4b-00144feabdc0.html Caitlin Long warns us that there is another impending credit fuelled...
Read More

0 replies on “The Problem with GDP”