Despite the massive fiscal stimulus package of nearly $800 billion approved by the Congress early last year, and trillions of dollars pumped by the Fed, the rally in various key economic data seems to be coming to an end. After falling to 32.5 in December 2008 the ISM manufacturing index peaked at 60.4 in April this year. In August the index stood at 56.3. Also the unemployment rate remains stubbornly high at 9.6% with almost 15 million Americans out of work. 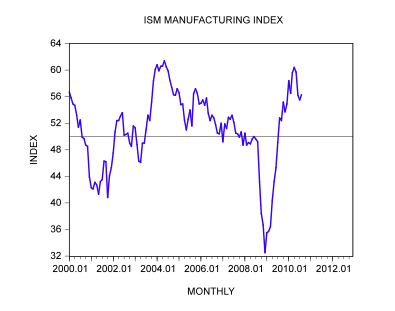 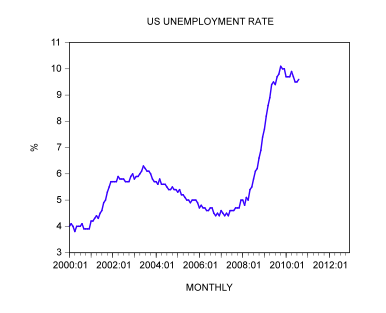 Also the housing market remains depressed despite the stimulus policies and record low interest rates. In July the yearly rate of growth of existing home sales plunged by 25.5% while new home sales fell by 32.4%. Furthermore, according to the Fed’s August report, known as the Beige Book, the US economy has shown widespread signs of slowing with an ample supply of qualified applicants for open positions. 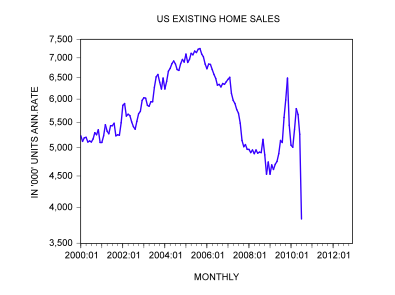 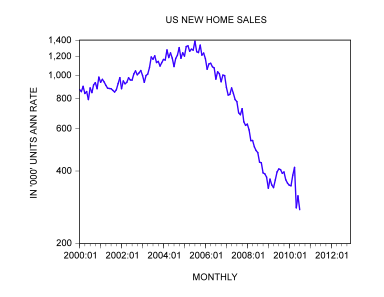 Against this background some economic commentators and the US President Barack Obama are of the view that there is a need for another stimulus program to lift the economy out of the black hole. In fact on September 8 the US President proposed $50 billion more in infrastructure spending and a $100 billion extension to a tax credit on research and development.

But why should another stimulus program be effective given that the previous program appears to have failed?

Some commentators hold that the last year’s stimulus package wasn’t big enough to revive the economy. It is argued that given a $15 trillion US economy in terms of GDP, the $800 billion was far too small to make a meaningful impact – a much larger stimulus is required.

For some commentators such as Paul Krugman only a very large stimulus program is likely to produce the needed result.

According to Krugman the main focus of any stimulus program should be to generate as much employment as possible in a short period of time. With improved employment consumer demand will follow suit and this will lift the economy, so it is held.

The popularizer of the magical power of the multiplier, John Maynard Keynes, wrote,

If the Treasury were to fill old bottles with banknotes, bury them at suitable depths in disused coal mines which are then filled up to the surface with town rubbish, and leave it to private enterprise on well-tried principles of laissez-faire to dig the notes up again (the right to do so being obtained, of course by tendering for leases of the note-bearing territory), there need be no more unemployment and with the help of the repercussions, the real income of the community, and its capital wealth also, would probably become a good deal greater than it actually is.[1]

For Krugman and other Keynes followers the key here is monetary expenditure. The larger the expenditure the larger the income and real economic growth is going to be, so it is held.

Is funding about money?

It is also argued by the proponents of a larger economic stimulus package that in the present economic slump boosting employment by means of various stimulus programs is not going to be at the expense of other activities. This means that employing more Americans is going to be costless. Accordingly to the proponent of this view, Paul Krugman,

The point is right now we have mass unemployment. If you put 100,000 Americans to work right now digging ditches, it is not as if you are taking those 100,000 workers away from other good things they might be doing.  You are putting them to work when they would have been doing nothing.[2]

But how is the increase in employment going to be funded? Who is going to pay for this? It seems that Krugman and most commentators hold that funding can be easily generated by the central bank by means of printing presses.

When baker trades his saved loaves of bread for potatoes he in fact provides a means of sustenance to the potato farmer. Equally the potato farmer provides a means of sustenance i.e. his saved potatoes, to the baker. Note that the real savings sustain producers in the various stages of production. (Real savings support the producers of intermediary goods and the producers of final consumer goods and services).

Observe that in order to maintain their life and well being what people require is final goods and services and not money as such, which is just a medium of exchange. Money only helps to facilitate trade among producers— it doesn’t generate any real stuff. Paraphrasing Jean Baptiste Say, Mises wrote,

Various tools and machinery or the infrastructure that people have established is for only one purpose and it is to be able to produce the final consumer goods that are required to maintain and promote people’s life and well being.

This of course means that through the increase in real savings a better infrastructure can be built and this in turn sets the platform for a higher economic growth.

Higher economic growth means a larger quantity of consumer goods, which in turn permits more savings and also more consumption. With more savings a more advanced infrastructure can be created and this in turn sets the platform for a further strengthening in economic growth.

The savings of wealth generators are employed to fund various individuals that specialize in the making and the maintenance of the infrastructure. (Real savings also fund individuals that are engaged in the production of final consumer goods).

Contrary to Krugman and other commentators, the artificial creation of employment such as digging ditches is not going to be cost free. The unemployed individuals that will be employed in useless projects must be funded. Since government doesn’t produce any real wealth the funding will have to be diverted from wealth generating activities. This however, is going to undermine wealth generators and is going to weaken the real wealth generation process.

In an economy, which is comprised of a baker, a shoemaker and a tomato grower, another individual enters the scene. This individual is an enforcer who is exercising his demand for goods by means of force. Can such demand give rise to more output as the popular thinking has it? On the contrary, it will impoverish the producers. The baker, the shoemaker, and the farmer will be forced to part with their product in an exchange for nothing and this in turn will weaken the flow of production of final consumer goods.

Since government doesn’t produce any real wealth obviously it cannot save and therefore it cannot fund any activity. Hence for the government to engage in various activities it must divert funding i.e. real savings from wealth generators.

Can something be generated out nothing?

Can an increase in the demand for consumer goods lead to an increase in the overall output by the multiple of the increase in demand as suggested by Keynes and Krugman? If this can be achieved then one could conclude that something useful can be generated out of nothing.

Production cannot expand without support from the pool of real savings i.e. something cannot emerge out of nothing. This of course means that only wealth generators can set in motion an expansion in real wealth.

Why data by itself cannot produce facts

How then are we to reconcile the so called facts that are supposedly presented by various studies, e.g. the ‘fact’ that stimulus programs can grow the economy? For instance, in his New York Times article from September 5 2010, Paul Krugman suggests that it is the massive government borrowing during the war in 1940 to 1945 that laid the foundation for long-run prosperity. Thus in 1943 the budget deficit as % of GDP stood at almost 28%. The rate of growth in real GDP after falling to minus 11% in 1946 jumped to almost 8% by 1951. 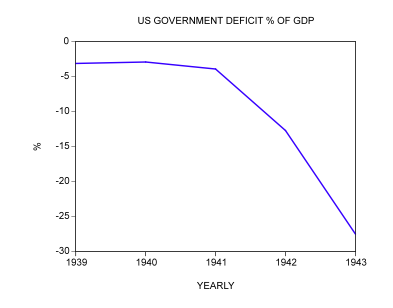 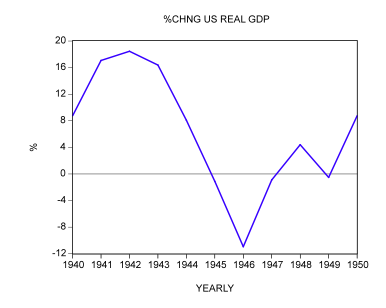 Note that the so-called economic growth here is assessed in terms of real GDP, which depicts monetary expenditure.  Hence we suggest that an important force behind the strong increase in real GDP must be the monetary factor. Indeed we had strong increase in the money supply rate of growth from minus 11% in January 1947 to 6% in May 1951. 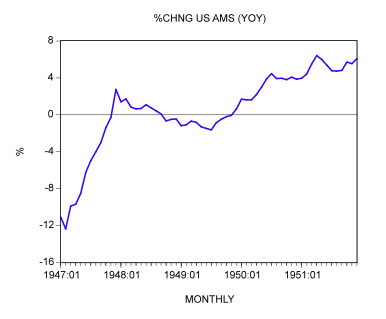 Now, even if we were to accept that notwithstanding all the shortcomings of real GDP and grant that the US economy had prosperity after 1946, it doesn’t necessarily follow that this occurred on account of large budget deficits as suggested by Paul Krugman and other commentators.

Contrary to the popular way of thinking, data cannot talk by itself and present so called facts. The data must be assessed by means of a framework that can withstand some basic scrutiny such as whether the government whilst not being a wealth generator can grow the economy.

Once we reach the conclusion (based on logical analysis) that the government cannot grow the economy we can emphatically reject various studies and assertions that tell us the exact opposite.

It must be realized that the data out of which various so called “facts” are produced appear to be supportive of various empirical research conclusions as long as the private sector of the economy generates enough real savings to support productive and non productive activities. As long as this is the case various so-called empirical studies can produce “support” for any pie in the sky theory such as that the government can grow an economy and that something can be created out of nothing.

Once the process of wealth generation is damaged and loose policies become ineffective in “reviving” the economy various commentators such as Krugman are quick to suggest that the laws of economics must have changed. For them this means forgetting logical analysis based on the essential laws of economics and going for massive spending. Now if the laws of economics have changed, on what grounds can Krugman and others employ the 1940’s events to make their policy recommendations? If everything is in a state of flux, why should laws that were valid in 1940 be applicable today?

We are at unusual times where usual intuition doesn’t apply here, getting this economy moving is the best thing we can do, not just for the present, but for the future and for our children.[4]

Despite the massive $800 billion fiscal stimulus package introduced last year the US economy is struggling to recover. Various economic indicators, after having a short rebound, are starting to display visible weakening. Many experts, including the US President Barack Obama, are of the view that a larger fiscal stimulus package might do the trick. Our analysis indicates that not only can fiscal stimulus not revive the economy, but on the contrary, it can make things much worse. The key factor for a sustained economic recovery is the build-up of real savings. This build-up can only be secured by wealth generators and not by government spending, which weakens the process of wealth formation.

2 replies on “Does the US economy need another stimulus package?”