I do not doubt that the Government is sincere in its wish to make Britain “open for business” and to deliver greater life chances through reform of the welfare state. I gave some time to the Centre for Social Justice and now I see many of their ideas filtering through to public policy.  I support those reforms from both a practical perspective and in view of their moral necessity.

The Prime Minister is correct to talk of the culture we have lost, particularly in respect of private shame. I am put in mind of C S Lewis’ book The Abolition of Man: there is, after all, such a thing as right and wrong. Lewis predicted humanity’s ultimate destiny on the path which embraces subjective morality: a dystopian society in which “we find the whole human race subjected to some individual men, and those individuals subjected to that in themselves which is purely ‘natural’ — to their irrational impulses.”

Some readers will recognise the problem and the dangers but reject the state’s role in finding a solution. However, we do not live in that world where the state is comprehensively rejected. There is a welfare state and it needs reform. The Government is getting on with it, and in the right direction too.

However, what the Government is not addressing is the de-civilising effects of inflation, that is, increasing the money supply.

What is commonly called “inflation” – a rise in the general price level – is an automatic consequence of debasing the currency. And currency debasement has been fierce in our lifetimes: the consequences have been and remain profound.

There is a presentation which, in one form or another, I have given many times. It shows, in a few charts:

By the end of the presentation, I have explained our banking, fiscal and economic crisis. Given that what it shows is a monetary and fiscal catastrophe, people receive it surprisingly well. As far as I can tell, people can handle the truth and they want it. 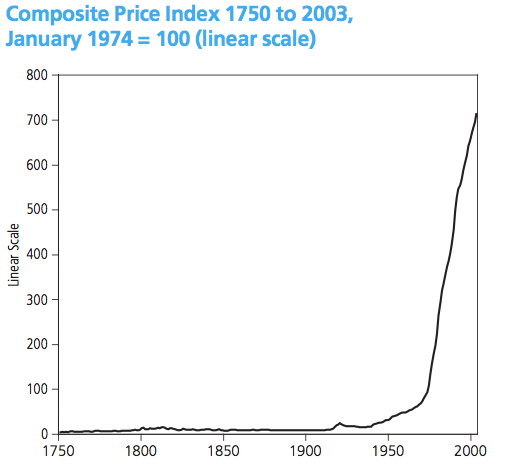 The grotesque debasement since 1971 – when Bretton Woods finally collapsed – hides the detail of the nineteenth century on a linear scale, so I include the same chart on a log scale. The log chart shows that, despite a number of crises and fluctuations, a pound in 1900 bought about the same basket of goods as a pound in 1800.

In contrast, money has lost almost all its value since the Second World War.

The Ethics of Money Production by Jörg Guido Hülsmann is particularly relevant at this point. Hülsmann writes:

To appreciate the disruptive nature of inflation in its full extent we must keep in mind that it springs from a violation of the fundamental rules of society. Inflation is what happens when people increase the money supply by fraud, imposition, and breach of contract. Invariably it produces three characteristic consequences: (1) it benefits the perpetrators at the expense of all other money users; (2) it allows the accumulation of debt beyond the level debts could reach on the free market; and (3) it reduces the [purchasing power of money] below the level it would have reached on the free market.

While these three consequences are bad enough, things get much worse once inflation is encouraged and promoted by the state. The government’s fiat makes inflation perennial, and as a result we observe the formation of inflation-specific institutions and habits. Thus fiat inflation leaves a characteristic cultural and spiritual stain on human society

He goes on to write of inflation’s tendency to centralise government, to extend the length of wars, to enable the arbitrary confiscation of property, to institutionalise moral hazard and irresponsibility, to produce a race to the bottom in monetary organisation, to encourage excess credit in corporations and to yoke the population to debt.  He explains how “The consequence [of inflation] is despair and the eradication of moral and social standards.”

That all sounds familiar.

Hülsmann’s work is not scripture of course, but neither are his ideas isolated. Consider Ayn Rand:

Whenever destroyers appear among men, they start by destroying money, for money is men’s protection and the base of a moral existence.

It is my firm view that inflation – the debasement of money – was the primary cause of the banking crisis. That inflation was a deliberate policy choice of welfare states. You may recall Eddie George’s remarks in 2007 and now Mervyn King has said, “Of all the many ways of organising banking, the worst is the one we have today.”

Moreover, if Hülsmann, Rand and other scholars including Mises and Hayek are to be believed, then inflation is also a major contributor to the moral and spiritual decline of our country. No amount of welfare reform alone will solve that.

All is not lost however. To return to that log-scale price index, money’s value was substantially more volatile in the first half of the nineteenth century than in the second. In 1844, the Bank Charter Act, Peel’s Act, took from the banks the privilege of extending bank notes in excess of specie (coins of inherent worth).  It was recognized that this extension of candy-floss credit un-backed by prior production of real value was a systemic cause of economic and banking crises.

Unfortunately, that Act left the banks unmolested in their ability to create deposits. As our system of money and bank credit has evolved, that loophole, combined with central banking and the socialisation of risk, has delivered us into our present predicament.

It falls to our generation to solve this problem and that is why we established The Cobden Centre.

As Martin Wolf wrote in the Financial Times on 9th November 2010, “The essence of the contemporary monetary system is creation of money, out of nothing, by private banks’ often foolish lending.” And then we wonder why house prices have raced out of reach. We wonder why the basement garages in Canary Wharf are full of supercars while what was once our industrial heartland languishes in state dependency.

I admire the Prime Minister and the coming welfare reforms. I will back them gladly. But, until we end inflation as a way to fund the promises of the welfare state, we shall not have done the decent thing. We shall not have established objective morality in banking and in that lifeblood of society: money.  Honest money is a prerequisite for social progress and it must be delivered if reform is to succeed.

With Cobden Centre contributor Dominic Frisby’s book on Bitcoin now a number 1 bestseller on Amazon in Online Trading and Investing, and certainly the best…